The rule goes, wins pay but that is even truer in the Colossal Gems slot, where wins lead to respins and subsequent wins lead to potential colossal symbol wins. The game unfolds on a reel-set of six horizontal and six vertical reels. The variance is low and the theoretical return to player is a little bit underneath 98.00%. 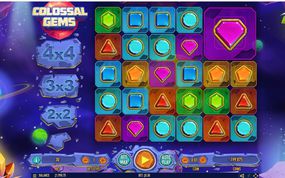 If you are into mining gems from planets in faraway galaxies then you aren't living a dream. The Colossal Gems slot is one of those online slots that involves gems made of vibrant minerals, which when lined on adjacent reels can turn up sweet wins and respins.

Habanero Games have been around for 99 online slots and this is a jubilee release, number 100, so small wonder it is an engaging game that offers a number of features, with subsequent win flare-ups that can consist of several grades of colossal symbols. The reel action of the Colossal Gems slots unfolds on six horizontal and six vertical rows.

The defining feature of the game are the respins and free spins. The first can occur following any win in the base game and the other is triggered following a number of consecutive respins. There are 30 paylines on the reel-set and these are always-active and able to register more than one payline win.

The slots experts at Habanero Games have made a fine-featured game. The graphics design is on par with the most exciting online slots out there, as Colossal Gems slot is highly animated and vibrating with splashes and glitter, that is, mineral dust.

The players will also find an uplifting rhythm that is brought on by the subsequent wins, which trigger the colossal symbol respins. That is underscored by a musical theme that completes the cycle of entertaining features, which, we must admit, deems any paying slot game an even more enjoyable adventure.

How to Play Colossal Gems Slot

To set the slot for the gameplay you need to first choose the coin size and the bet level. This feature strikes us massively familiar because it only appears on the slots made by one other company - NetEnt.

Habanero Games have adopted the same manner of configuring the wager, which isn't most straightforward but does the job nevertheless, with the bet amount displayed on the ticker at the very bottom underneath the reel-set.

The autoplay function is to the right of the centrally-placed Play button. This is where you can choose from the autoplay number presets, which let the reels spinning for the specified number of times. There is also the optional controls that can set a total loss or a single time win limit, or both.

And last but not least, to view the paytable and all of the symbol pays, gameplay and bonus feature information, as well as the rules on the Colossal Gems slot, select the 'i' button from the bottom left corner of the screen.

How to Win Colossal Gems Slots

The lead feature of the game are the respins and a respin can ensue from every single win during the base game. Whenever you connect a number of matching symbols the respin will result in a symbol that takes up four squares of the grid.

If there is yet another win, the game will gear up into the second respin and deliver a symbol that takes up three squares of the grid, by three.

If this symbol connects with its match made in heaven, then there is the fourth respin, with the biggest symbol of four by four. Hence the name Colossal Gems slot.

While the game doesn't turn up any wild symbols in the base game, these do appear during the Colossal Gems free spins and substitute for all symbols.

The diamond substitutes for all because there isn't a scatter-bonus symbol to trigger the free spins. These are, instead, triggered by three consecutive respin wins, so not only do you win the cash from these but you also stand a chance of winning additional cash from the six free spins.

The difference between this and the base game is that any free spin game can become a colossal symbol galore. This is because the symbols fall freely in the free spins, so there is no need for subsequent respins for it to occur.

This super-exciting game by Habanero can deliver spicy wins, just like the name of its makers suggests. Many of the those who stumble across this game or simply come to some hear-say about it will be tempted to try it. The Colossal Gems demo may be available online or at the official website of Habanero, but the smallest bet suffices for a low-cost test ride.

We have a mighty online slot here. It combines the cluster-wins action of the grid based slots yet it has 30 always active paylines. As if the respins weren’t enough, as well as the colossal symbols, Colossal Gems slot also throws in the free spins bonus. All this with a low variance potential outcome and a theoretical return to player of 97.88% - rarely high.

Claim a welcome offer to discover the game at any one of the online casinos on this very page.