3 Tiny Gods comes with five reels and four rows that spin across 30 fixed paylines. The game comes from Foxium Games, who isn't hugely popular, yet, but the company does release its slots via Microgaming. The game at hand can do few tricks that will make some players glad they'd tried it out. In terms of maths and probabilities, medium variance gameplay is in full swing, which is paired by a theoretical return to player of 96.40%. Make sure to check out our comparison bit between this game and the Marching Legions slot, as the two bear some similarity but also some notable differences. The latter game can be a great alternative to try when 3 Tiny Gods slot has ran its course for the evening. 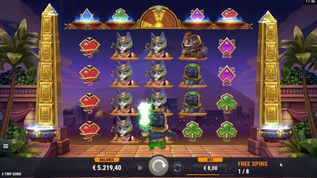 Here is something we haven't seen before - an Ancient Egypt-themed slot that makes a unique twist on some of the most popular deities in the world of online slots. Perhaps 3 Tiny Gods slot gets its inspiration from recent releases such as Micro Knights slot and Marching Legions, perhaps it doesn't, but the game surely makes a comical twist on a fierce entity such as Anubis.

Most players are going to find the game lovable both because of the base game and due to the payout potential which can be reached in the free spins bonus or in the jackpot bonus game. Three reel modifiers can trigger at any time to spice up the action towards winnings of up to 5000x multiplied by the winning bet.

In terms of graphic design the game is a lot better compared to the most recent notable release by Foxium, Boom Pirates slot. The design features that mark the gameplay are some finely-chiseled figures that represent Anubis, Horus, Bastet the cat, the queen and the pharaoh. These are balanced out by the set of low-paying symbols found on the other side of the paytable - the cards' suits made of fine gems.

3 Tiny Gods slots has been imbued with a host of special video effects by the makers at Foxium Games. The players will find glowing lights that can material symbols to and out of existence. Occasional thuds and rumbles give the reel-set a jolt, while the golden obelisks send a bolt of thunder to zap blocks of symbols. All in all, this is a very entertaining game that also comes with a great payout potential.

How to Play 3 Tiny Gods Slot

If the time is right to start playing the game, the first order of business is to choose a bet amount. This is possible by pressing the orange BET button which is found to the left of the button for Spin. The game has a nice range of options that begin with a minimum bet of 10p per spin and a maximum bet of £50.00.

In the same area of the screen but in its symmetric opposite the players will find the window that shows the concurrent balance. In the middle-bottom are the buttons for fast-forward, spin, and autoplay. The first button toggles on fast spins, the second sends the reels spinning for one round and autoplay lets you kick back and let the 3 Tiny Gods do the spinning on their own.

3 Tiny Gods slothas a paid feature that avails improved odds in triggering the free spins bonus or the Mystery of Horus feature. This comes at a cost, however, at 50% of the bet. Whether it is worth it or not each player should decide for themself. Nevertheless, the option is there and it is always tempting to have a free spins bonus come sooner than later.

How to Win 3 Tiny Gods Slots

Winning at the game requires at least three matching symbols to fall on any of the 30 paylines. The game comes with a wild symbol that substitutes all other symbols and pays a handsome prize of 100x multiplied by the bet, which is the most lucrative of-a-kind win in 3 Tiny Gods slot.

The game also makes it possible to get more than a single win outcome across the 30 paylines, resulting from a single spin. In terms of payouts, the deities and the rulers are the category of high-paying symbols, with the pharaoh paying most for five matching symbols - 20x multiplied by the bet.

We said at the start, three reel modifiers can spice up your reel adventure at any time. These are named according to each of the deities.

Horus’ feature can create a block of two or three reels which are then buzz-cracked by the obelisks in oder to reveal a block of one of a kind symbol.

Bastet's feature only comes on following a non-winning spin. In the event, the cate deity appears on the reels and mixes around the symbols to create a guaranteed win.

Last of the modifiers is that trigger by Anubus, however, it can only appear in the free spins bonus to increase the number of free spins for up to 12 - three spins for each time Anubis's feature triggers.

The free spins bonus is triggered by three scatters on reels one, three and five.

This is perhaps the defining highlight of the game. Any of the three bonuses (rewarding 50x, 500x and 5000x) can trigger with the help of the coins that the player collects throughout the game.

There is something about these two games that makes them appear similar. It's probably the style of the graphics that gives that impression, or should we say, it is the tiny gods' big heads which are similar to those of the Roman legionnaires. Nevertheless, is there any other similarity between these games? First off, the defining feature of the present game are the three reel modifiers that come with each of the gods.

Compared to this, the legions on the other games can be seen marching towards the left and creating a havoc of winning outcomes along its path. In terms of visual effects and gameplay details, both games are nothing short of amazing, no matter how different they may appear. In terms of the potential payout. 3 Tiny Gods can do 5000x your bet and Marching Legions can reach a theoretical maximum of 10,000x.

The most striking detail on each of these games' fact sheets is the RTP value. 3 Tiny Gods has a positive RTP that's above the 96.00% mark and the other game probably has what is this year's biggest theoretical Return to Player of 98.12%.

Foxium have enabled the game as a free play demo at online casinos that enable the players to try out games with free credits. This means that winning outcomes are not paid in real cash. Players who want to play 3 Tiny Gods at a real money online casino can check out the list of casinos on this very page, claim the offer and have fun with the game.

The game has it all, and it is medium variance with above the average RTP. The reel modifiers can trigger any time and the potential jackpot prizes are just a nice eventual treat.

Discover the 3 Tiny Gods slot by claiming a welcome offer right from this page and play at top-rated online casinos.

Miles Bellhouse And The Gears Of Time

Where can I play 3 Tiny Gods slot?

The Foxium/Microgaming production is available at casinos that are powered by the Microgaming network of slots. Many of the casinos that have been reviewed on this site have games by this company and to play 3 Tiny Gods it is best to check out the casinos on the review page.

Can I play 3 Tiny Gods demo?

The short answer is certainly, yes. The game is available as a free play demo slot at online casinos that host Microgaming/Foxium games in practice play mode, as it is explained in our review.

How much can I win on 3 Tiny Gods?

The gods may be tiny but there is nothing along those lines regarding the game's payout potential, which is no less than 5000x multiplied by your bet. This is an amount that can result from a single win, or wins up to that amount.