This reel adventure unfolds on a reel-set of three rows and five reels. These spin cross 243 ways to win, which means wins are made for matching symbols regardless of the position on the row. The players will find a high variance in Marching Legions, a rather impressive theoretical return to player of 98.12% and maximum payout potential of 10,000x multiplied by the winning bet. 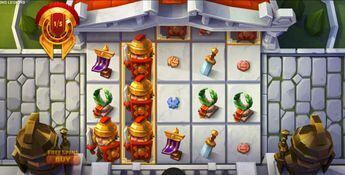 Relax Gaming have been quick to quip to another game that makes the slots experience feel like an arcade game. We could say that Marching Legions slot takes some cues from Crazy Tooth Studio's Fortress Charge slot, which is a full-on arcade-like online slot. Another game that comes to mind is Micro Knights slot, which is again, a different but similar game because of the grid-set. Nevertheless, Marching Legions slot has different features and gameplay that is impressive.

Marching Legions can make an impression on any player thanks to the extra features. The players can discover the nudge feature, the respin and collect, and a free spins bonus feature which comes with an extra of its own. What is more, those players who want to go for an immediate take on their chances on the free spins bonus can do so by purchasing the feature, albeit at a price that is steep.

Relax Gaming take us to a public square in ancient Rome where the main attraction are the legionnaires that represent the game-defining symbol. This symbol comes in single units to cover one square on the grid, however, they being legions, and marching at that, invites that symbol to appear in stacks across the full reel.

The visual field on Marching Legions slots is filled with movement. The soldiers march on to the reel-set, there are slams and thuds when the nudge feature triggers, and few other visual bits and pieces that make for entertaining gameplay. The symbols are drawn in a video game-like manner, with a total of three low-paying symbols, three high-paying symbols, and the legionnaires.

How to Play Marching Legions SLot

Relax Gaming have provided to the players the familiar layout for the controls and buttons on the game. These are located underneath the reel-set, at the bottom of the screen. This is where the players can set up for the gameplay ahead, or change any settings whenever needed.

To start spinning the reels and invite the Marching Legions slot figurines, press the double arrow button in the center bottom. This causes the reels to spin one time for the active bet. Another way to play the game is hands-free. This is possible with the autoplay option.

Press the button to the right of Spin to open up the menu where you can select the automatic spins presets. There are optional settings that enable the players to set up limits on the spend, or to make the autoplay mode stop when the bonus feature has triggered.

Last but not least, there is the sound button in the bottom left corner of the screen, and the menu, where players can view the game rules or browse the paytable. Bets in Marching Legions start at 10p per spin and end at a maximum of £100.00.

How to Win Marching Legions Slots

The players can win cash prizes by getting three matching symbols to form a string across the reel-set. These don't have to be straight rows, because they can fall on any position and still account for a winning outcome.

In terms of value, the Marching Legions slot has the legionnaire as the most valuable symbol. It is the only symbol that pays with two symbols, at 1x on the bet. Wins with three legionnaires pay 1.5x, four equal 2x and five matching symbols pay 2.5x.

The flag and staff symbol pays more, with 3x for five symbols and 1.8x for four, however, this symbol doesn't pay with two on the reels. At any rate, the payouts reflect values that are rather low, because they can and are often helped by the extra features.

The game has two reel-modifiers. One is the Marching Respins. It triggers when a stack of three legionnaires falls on the reels. The soldiers will march one reel to the left for each remaining turn, until the exit the reels. Each additional stack results in another set of respins.

Landing two or more stacks of legionnaires may trigger a nudge feature, which causes the stack to become full and trigger the respin.

The free spins bonus is triggered when there have been five stacks of legionnaires that have marched to the leftmost reel. The free spins come in waves. Each wave starts with a stack of soldiers starting on the fifth reel and marching towards the first.

the Buy Feature makes it possible to buy the feature at a whopping 120x multiplied by the bet.

Relax Gaming are known for releasing their online slots as free play demo games. This enables the players to try the game and check out its gameplay and features with free credits.

An appetizing 10,000x multiplied by the winning bet is serious plunder to consider, but realistically it is a far-fetched military campaign, equivalent to Ceasar’s to Gaul. On the other hand, the marching feature is an amazing way to get more from the game, especially if the free spins turn out more fortunate than usual.

Discover the Marching Legions slot by claiming a welcome offer right from this page and play at top-rated online casinos.