Let's bid a warm welcome to the latest in the Break da Bank Again series, now with the Respin feature. Play the game to 'break its bank' and for a chance to come out victorious on this 5 reel slot with nine always active paylines. The respin feature acts as the nudge feature in some old slots, but it does bring the thrill of gaming if that move results in a winning outcome. 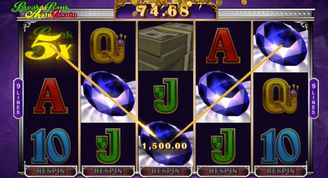 The latest edition of Break da Bank Again Respin slot is here to impress. Play for a chance to win prizes and eventually use the respin option.

The slot that started the series was a classic Las Vegas 60's type of game with three reels and three rows that could draw on five always active paylines. The game is famous not for its look and feel but for the winnings that could have been potentially made on it. But it's been years since the release in 2003 and there are few more editions whose success is owed to that Break da Bank slot.

The most current edition is Break da Bank Again Respin slot. The title gives away the central feature of the game and it is the re-spins that can occur following any given spin. This isn't the only feature in the game as there are also multipliers, and unlike the very first ever, there is a wild symbol.

Before you hit the Spin button and set the reels turning towards the first outcome, make sure you don't have a huge sum as a default bet, unless you don't mind it.

To set the bet select an amount for the bet per spin. This setting is located in the bottom left corner of the screen. You can opt for any of the amounts that are between the smallest bet of £0.09 and the biggest bet is £36.00.

Regardless of what amount will be selected, the game will play all of it across the nine always-active paylines on the Break da Bank Again Respin slots.

Furthermore, there is an autoplay option which lets the players select a number of automatic spins. This will cause the slot to deduct the specified sum of the bet with each turn. To stop the autoplay setting hit the same button again.

And last but not least, regarding the game's settings and buttons, there is that for the paytable. It opens up the information bulletin where all of the symbol wins are displayed, along with explanations about the bonus features, about the re-spin feature and the game rules.

The winnings in this game can be made by linking the same number of symbols on a payline, where five pays the biggest outcomes for each respective symbol.

The free spins bonus is there to complement an exciting gameplay that is certainly an attribute of most Microgaming slots. The previous versions of Break da Bank Again are a case in point.

The main difference between this and the previous edition is the absence of the four-reel-sets ability. The other Break da Bank slot could replicate the reels so that the players get four reel-sets, of which each one spins on its own volition.

That feature has been replaced with the respin feature on the Break da Bank Again Respin slot. The respin allows the players to select a reel and cast a respin following each turn, at a cost. This essentially nudges the reel so the symbols reshuffle towards a potential winning outcome.

This is going to be an excellent game once it hits the online casinos. Those of who’ve head a sneak preview of the game have been impressed by it, so hold tight as the game is dropping really soon.

Pick a slot game, like any of the Break da Bank Again slots, and play at one of the online casinos on this page. Claim a welcome offer to start with a bonus.

One Hundred To One