A 15 payline slot plays on three rows and five reels that comes with a free spins bonus and wilds that add +2 to the list of remaining free spins. The game has a 1200x exposure on the winning bet and there is a separate bonus of 100x on the win when you have crossed all 5 levels in the bonus game. 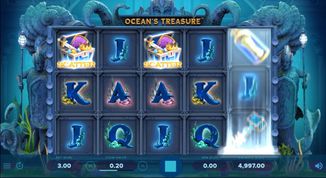 Play the Ocean’s Treasure slots for a chance to win free spins, multipliers and a secondary bonus game where the prize is 100x on the win.

A deep dive in the ocean and a swim with among the fish can lead to cash prizes that are worth counting. This magical exploration journey unfolds on the Ocean's Treasure slot made by the slots experts at NetEnt. The game offers gameplay that reminds of the famed Starburst slot, even though it is not a two-way-pay game.

Nevertheless, the basics are there to provide a rather neat gaming experience, such as a wild symbol and a scatter, and also a bonus that is granted to the lucky players that reach level five. Expanding symbols and multipliers spice up the potential for big wins and over all, the gaming gaming experience.

In both the base game and free spins bonus the wins are made with three symbols of the same kind. Ocean's Treasure has 15 always active paylines that spin across three rows and five reels which can produce more than a single payline win that results from the same spin.

It is very rare that NetEnt release a slot that doesn't look and feel like 99% of their games. Thankfully, Ocean's Treasure slots falls inside the overwhelming majority of their productions and here is why. The game doesn't pretend to be a huge deal, but it nevertheless does all it takes for a full gaming experience and win potentials that fell good scoring.

The game is set in a world dominated by blue tones. There are lots of underwater world references, including deep ridges, bubbles, schools of fish and some bizarre critters such as the gnarly stonefish and that prehistoric shark that appear through the free spins levels.

It all goes to say that the game does well to entertain. A musical score adds to the mood, look and feel of it.

How to Play Ocean’s Treasure Slot

NetEnt have no reason to depart from their familiar layout of the settings where the spin button is underneath the third reel and everything else that pertains to the gameplay is on both sides thereof.

The coin value is the only setting that influences the total bet bet spin. So one thing that's out is the bet level, because that's been pre-set now and changes with the bet automatically.

Coin value has the payline bets that extrapolate across few levels, but it's all simple to follow as the Total Bet amount will be displayed on the window to the left.

Autoplay is the button we want to go to if we wish to kick back and relax, not having to press the spin button manually. This button can be found in the bottom left corner of the screen. It offers additional options in the Advanced button that help mind the balance.

How to Win Ocean’s Treasure Slots

Wins of three symbols or more can be made with the game's low paying and high paying symbols.

The picture symbols are underwater sea adventure implements, which appear archaic and somehow sci-fi futuristic in the same time. These symbols are a octagonal compass, a message in a bottle, one bizarre looking key, some crystals embedded in gold.

Most valuable symbol in Ocean's Treasure slot is the crystals in gold picture with 100x multiplied by the winning bet. Also there is an expanding wild symbol which is represented by a siren.

Trigger the free spins bonus with three scatters, which only appears on reels one, three and five. At the onset you are given ten free spins but these can get expanded on when the trident wild stops on the reels. In the event it throws in 1x in the meter above the reel-set and two free spins.

The more wilds you get the bigger the chance is to reach the next level. When you reach the fifth level you get to play a bonus game where the biggest win is 100x on the triggering bet. The cap on the free spins additions with the wild symbol is at 102.

NetEnt release some of their slots as free play demo games on their page, but they withhold enough titles, which is a message saying register at an online casino and play the game, albeit in practice mode.

We are inclined to thinking that this game will turn some heads and hold the player’s attention. It’s just an entertaining game with a real win potential. Perhaps the top payout isn’t huge, but thanks to the free spins bonus you could end up with a neat lump prize.

Age of the Gods: Ruler of the Seas