Dive deep in the waters of Chinese mythology and discover the East Sea Dragon King slot. Once this vengeful deity raised storms and caused thunderstrikes. Now NetEnt have given it a benign aura so it could provide wins of up to 8000x. This is a five-reel, three-row slot that turns up cluster pays and expanding wilds with a respin for each one emerging on the reels. 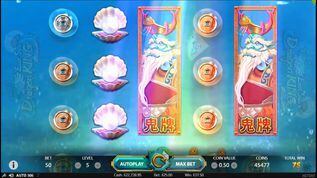 Play the East Sea Dragon King slots for a chance to win up to 6000x on the bet. Get wilds and respins all in the same turn.

Resuming the conveyor belt of Ancient China-themed slots by NetEnt, we have East Sea Dragon King coming to the fore with beautiful graphics and an energetic gameplay. This release seems a lot nicer than several that are destined for that online and land casino market, games such as Who is That Bride slot and Fortune Rangers slot.

Since China has 10,000 stories throughout its immensely ancient history, the slots experts at NetEnt have selected one about a Dragon King who presides over the East Sea. This has Taoism undertones since the East Sea is the subject of famed stories about the mystical entity that leads to a fortune. The same could be said about East Sea Dragon King slots, which can generate a single spin win of up to 6000x multiplied by the winning bet.

The graphics design is moderate yet offers an entertaining visual experience, while the gameplay covers a number of features that go just in line with it. There is an expanding wild symbol, respins and a free spins bonus feature. The wins are made from left to right on cluster pays.

The players will find themselves in an underwater world where the grid consists of three rows and five reels. The symbols that are displayed involve a box of sycees, Chinese gold, silver and bronze coins, a scroll of a map, a jade statue, an open shell with a pearl inside and the Dragon King wild symbol.

This is a dynamic reel adventure that calls for the autoplay feature turned on. The reels spin fast, turning up winning clusters that make the symbols bubble and flash. The musical theme on the East Sea Dragon King slot manages to combine elements of an underwater kingdom as well as elements of ancient China.

The players will find that labels on the reel-set are written in Roman letters. Surprise! This is different from the previous releases in this series, and not only because East Sea Dragon King slot is a high-paying game. It is also that this game may rock the boat of any curious player who tries to do some fishing on it.

To set the reels spinning hit the spin button underneath the central reel. To get the automatic spins going, select your bet and then work the controls in the Autoplay button. This is where you can specify the number of the spins plus stops in the advanced menu, such as stop on a specified one time win or stop on a total loss.

The bets in this game are configured from the Level and Coin Value fields. The coin value ranges between a penny and £2.00. The fixed number over which the coin size is extrapolated is 10, which means the smallest bet is only £0.10 per spin on a penny coin size. Raising the bet levels between one and ten raises the bet. The game's maximum is £200.00 per spin.

The players can make the wins at any spin when five or more symbols match across horizontal or vertical lines. There can be a reel-set full of the same symbol, or aided by the wild and that can turn up some hefty wins from that single spin.

The wild is the game's most valuable symbol as it substitutes for any and expands on the reels, but it also stays for a respin. The most valuable symbols in terms of sheer monetary value is the jade ornament. It pays 1000x for the most optimal outcome. The sycees pay 500x and the pearl 250x.

The low paying symbols are the gold, silver and bronze coins, paying 100x for the most optimal outcome. Needless to say, the wild makes the decisive blow on the game's bank and fortunately the East Sea Dragon King slot turns it up more frequently than not.

The game's bonus features come with the wild. Besides the expanding Sea Dragon King  there aren't any bonus or scatter symbols. So the only 'free spins' come with the respins which are in turn triggered by the wild, and with each subsequent wild that may expand on the reel-set.

The free play feature comes by way of finding the game as a demo at some of the online casinos on this page. Yes, there are such places that offer demo games. One of those is BGO, another is Atlantic Spins. We have the reviews on this site so there may be a casino that hosts the game.

The game offers an engaging entertainment but it is a high variance slot, so the wins will be sparse, with a chance for a big win amongst all the dead spins. Knowing the trade-off, this slot game has the potential of delivering a big win, so anywhere between 2000x and 6000x may be considered just that.

Claim a welcome offer and discover the East Sea Dragon King slots at the casinos on this page.