Planet Of The Apes Slot

The developers at Net Entertainment found the inspiration for this slot in the movie of the same name by 20th Century Fox. And if you wanted a game that is packed with action and excitement, you are in the right place. Planet of the Apes slot has four amazing bonus features, that have the potential to bring you lucrative prizes.

Planet Of The Apes Slots Online

Based on the eponymous movie franchise, Planet of the Apes slot from the Swedish software provider NetEnt takes you through the different stages in the life of the Ape Army leader, Caesar. The game makes use of a dual reel gameplay of five reels in three rows and twenty fixed paylines on each reel set. Packed with bonus features, including free spins and Stacked Wilds, as well as an RTP of 96,30%, the game is an excellent choice!

Planet of the Apes Overview

As stated in the previous section, this online video slot is themed on the different phases of Caesar’s life presented on the innovative dual reels gameplay from the Swedish wizards NetEnt. The left set of reels – bearing the title Rise - represents Caesar, the leader of the ape army, before his escape from captivity, while the right set of reels – titled as Dawn - represents Caesar after he has managed to escape from captivity. NetEnt has decided to design this online video slot as a five-reel slot with three rows and twenty fixed paylines on each set of reels. Each reel set is designed to work as a separate set during the base gameplay, but during the additional bonus features, they may join forces and work together.

The left “Rise” reel set of the Planet of the Apes slot includes such symbols as Caesar, three of the human characters from Rise of the Planet of the Apes, which are the game’s high valued game-specific symbols, and the standard symbols 10, J, Q, K, and A, which are representing the game’s low valued symbols. Symbols on the right “Dawn” reel set include such characters as the protagonist, Caesar, three human characters from Dawn of the Apes, which are also used to represent the game-specific high valued symbols, and, again, the standard symbols 10, J, Q, K, and A, as the game’s low valued symbols.Planet of the Apes slots also makes use of two Wild symbols, one per set of reels – a gold wild symbol on the left “Rise” set of reels, and a red wild symbol on the right “Dawn” set of reels. These Wilds substitute for all other symbols, except the Bonus and Scatter symbols, to help players land winning combinations, and both have identical payout values.

How to Play Planet of the Apes Slot

Before spinning the reels of Planet of the Apes slot, players need to set their bet. Coin denominations range from 0.01 to 1 and players can set them on the bottom right corner of the game by clicking the arrows of the Coin Value box. The arrows of the Level box in the bottom left corner of the screen let set the desired number of coins per line. If you want to place the maximum bet available with just one click, you can do it by pressing the Max Bet button. Once this is completed, the only thing left to do is to get the reels spinning by pressing the Spin button, round black button with inverted arrows positioned at the bottom centre of the game. Players who don’t want to click ‘Spin’ repeatedly can use the Autoplay option which allows you to turn the reels automatically for a certain number of rounds without interruption.

How to Win Planet of the Apes Slot

Winnings in Planet of the Apes slot are awarded after landing combinations of matching symbols. The amount of money you will earn is dependent on the landed symbols and their quantity. You can check the payout value of any symbol, as well as the slot’s paylines, at any given time by opening the game’s paytable. 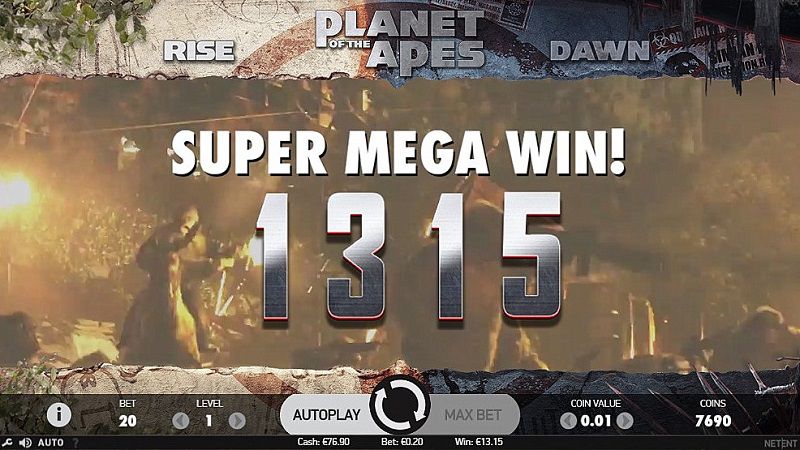 Planet of the ApesBonus Features

When spinning the reels of Planet of the Apes slot, you'll have a chance to trigger four entertaining bonus features. Keep reading to find out more about them.

The first Planet of the Apes slot bonus feature can occur right before each spin and the different symbols will be picked at random from each set of reels. The reels will re-spin and eventual occurrence of the two symbols will freeze in place or move to the correct side if they happen to land on the opposite side. When there are no more matching symbols, the reels stop re-spinning and the payout is completed.

When the play area on the left Rise reel of the Planet of Apes slot gets entirely covered with Wilds, the Stacked Wild feature will get triggered. During this feature, the Stacked Wilds from the Rise reel set will be copied onto the Dawn reel set in the corresponding position.

Planet of the Apes Free Spins

Landing 3 or more Scatters anywhere on the reels of the left Rise set, will trigger the Rise Free Spins feature. When triggered, you will be awarded 10 free spins. The number of Wilds that land on each spin will get collected, and during the last remaining spin, the collected wilds will be placed randomly on the reel set.

When 3 or more scatters are landed anywhere on the right Dawn reel set, the Dawn Free Spins feature gets triggered. When activated, the game will award 15 free spins. Whenever the three different flaming symbols – Multiplier, Extra Free Spins, and Extra Wild – are landed, a meter gets partially filled, which, when full, activates the corresponding feature. 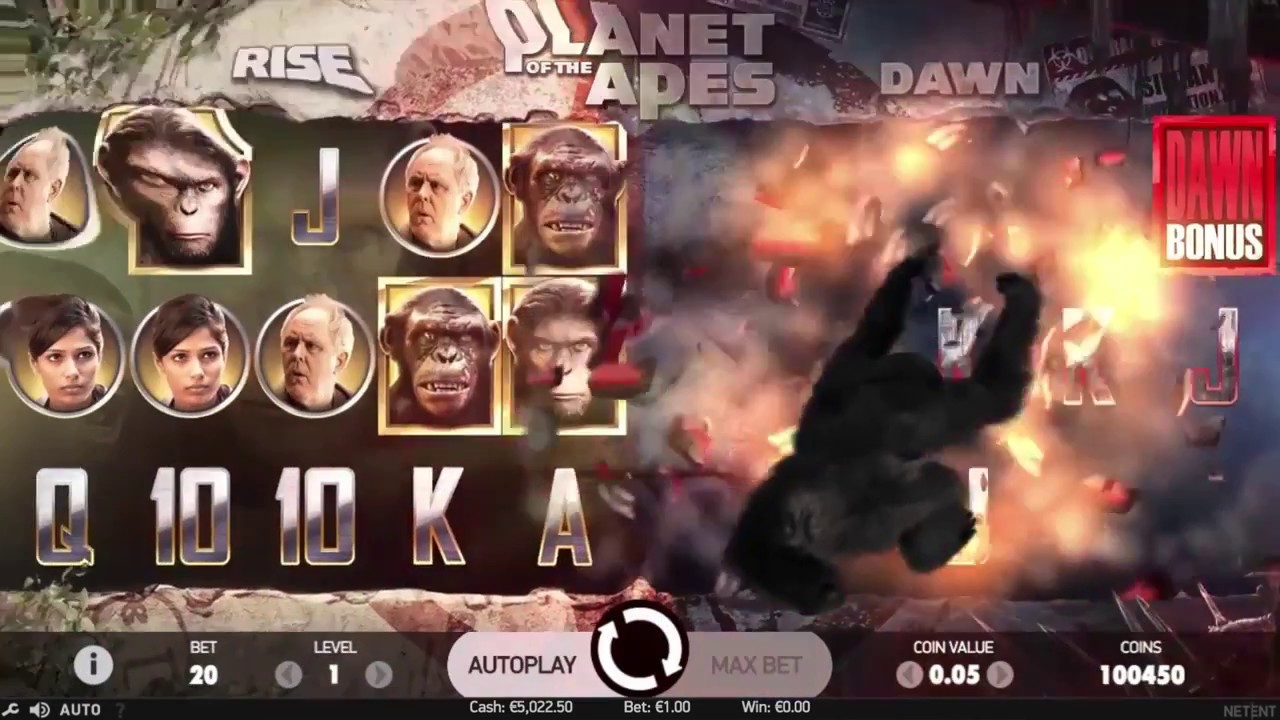 Planet of the Apes Demo

Playing the Planet of the Apes demo is much like playing the real Planet of the Apes slot game. When you start the demo, it is the same as the real version, and you can kick off the reels of the without any problems. The sole difference between the two versions is that the demo doesn’t require you to deposit any money, while in the real game, you are playing with real money.

Playing the demo has its pros and cons: Players have the opportunity to try the game before deciding to play the real money version and check out how often the game’s bonus features are triggered, whether the gameplay is interesting or not, and what leads to the most lucrative win. The game’s paytable can also be opened to find out information on the symbol combinations and paylines, as well as additional information that will help you devise your Planet of the Apes strategy.

Should I Play Planet of the Apes Demo?

As already mentioned in the above sections, playing the demo of any online slot, or in this particular case playing the Planet of the Apes demo, has its own advantages. Undoubtedly, the biggest advantage of the Planet of the Apes demo version is that you can try the gameplay of the real money version without risking your own money during the spins.

Our Planet of the Apes Review

The developers at Net Entertainment found the inspiration for this slot in the movie of the same name by 20thCentury Fox. And if you wanted a game that is packed with action and excitement, you are in the right place. Planet of the Apes slot has four amazing bonus features, that have the potential to bring you lucrative prizes. So, when you spin the reels of Planet of the Apes slot do your best to trigger the Dual Feature, Rise and Dawn Bonuses, Stacked Wilds, and Free Spins. The free spins bonus feature has two additional mini bonus rounds, which are Rise Free Spins and Dawn Free Spins.

Planet of the Apes slot has an RTP of 96.30%. If you were wondering, which casino site offers this cool slot, we’ve got you covered. Continue reading and find out the amazing welcome bonuses and other promotions that this site provides for their players

Here at Slotswise you can find trustworthy and reliable online casinos, get familiar with their welcome bonuses and give Planet of the Apes slot a try.