Forgotten Island Megaways is a new slot release where Microgaming is going to use the popular mechanic that it acquired from Big Time Gaming. This release is coming with a Great Ape, a King Kong inspired creature, placed on a forgotten island. There, you’ll get to spin on six reels and play with up to 117,649 ways to win, thanks to the Megaways Mechanic. The game is packed with Rolling Reels, Free Spins, as well as multipliers and wild symbols. The maximum payout you can get from it is 7,000x on a single spin. So, stick with us while we explore the forgotten island in our Forgotten Island Megaways Slot Review. 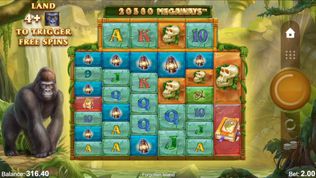 The Forgotten Island Megaways slot is a game created by Microgaming in collaboration with All41 Studios. It’s a six-reel slot machine that has up to 117,649 ways to win (paylines), thanks to the Megaways mechanic. There, players can benefit from the Rolling Reels feature, Kong Spin feature, as well as the Free Spins feature. The reel action takes place on a forgotten island, as the game’s title suggests. So, are you ready to join the King Kong-inspired ape that’s lining on the island? If you get lucky enough, you’ll win up to 7,000x your stake! Read our Forgotten Island Megaways Slot Review to learn more.

After many of the biggest names in the online slots industry acquired a Megaways licence from Big Time Gaming, Microgaming decided to join them and has partnered with All41 Studios to release the Forgotten Island Megaways slot. This game has six reels and up to 117,649 ways to win, thanks to the Megaways engine. Each reel can have from three to six symbols and the number of active symbols changes with every spin. This affects the number of ways to win (Megaways) that you have on a single spin. For more details, read our Megaways Overview where we explain how this engine works.

The more symbols you have per reel, the more Megaways you play with. Then, you’ll need to land at least three matching symbols on a payline, starting from the leftmost reel, in order to form a winning combination. Also, you only need to land two of the highest-value symbol on a payline, in order to form a win. The Forgotten Island Megaways slot is playable with betting options that start from £0.20 and go up to £20 per spin. There is also the Autoplay option where you can select the number of auto spins that the game will play by itself.

In the Forgotten Island Megaways slot, the maximum payout you can win is 7,000x on a single spin. This means that, if you play with the maximum bet possible, you can win £140,000 just in one spin, which is excellent. But, in order to achieve that, you will have to trigger the bonus features included in the game. These include Rolling Reels, Kong Spin, and the Free Spins feature. We’ll talk more about them in our Forgotten Island Megaways Slot Review below.

As we’ve mentioned above, the Forgotten Island Megaways slot features a giant Ape, inspired by King Kong. The ape is placed on a forgotten island, as the game’s title suggests. Therefore, the reel set is placed on a background that shows the island, with the ape standing on the left side of the reels, staring at you directly. Everything is well-designed and the beautiful background, symbols, and audio effects provide a top-notch gaming experience.

With high-quality design and graphics, the symbols in the Forgotten Island Megaways slot are placed on stone slabs. The low-paying symbols include the A, K, Q, J, 10 and 9 royals. On the other hand, the higher value symbols include lanterns, grapple hooks, treasure books, and gorilla skulls. The Gorilla Skull symbol is the top-paying symbol on the reels that pays up to 50x your stake for six on a payline. In addition, there is the Compass Wild symbol which substitutes for all regular symbols and helps you form a winning combination. The Kong himself is the scatter symbol, used for triggering the free spins feature.

The RTP (Return to Player) percentage of the Forgotten Island Megaways slot is 96.25% which is pretty much industry standard and we are glad about it. Moreover, the game’s variance is high, meaning that you won’t land very frequent winnings, but when you win, you’ll win a big prize. The game also comes with a hit frequency rate of 33.66% which means that every third spin is theoretically a winner. Plus, if you trigger the bonus features, you can end up winning up to 7,000x your stake, which is great. Here you can read more about the Variance, Volatility and RTP in online slots.

We’ve already mentioned something about the bonus features included in the Forgotten Island Megaways slot, so let’s explain them in more detail. First of all, the game has a wild symbol, which is used to help you form a winning combination by substituting for all regular symbols. Apart from the wild, there are three main bonus features that are able to give you the biggest prizes available. So, let’s start explaining them one by one.

Every winning spin in the base game has the opportunity to wake up the Kong and trigger the Kong Spin feature. This feature is randomly triggered and when it comes, it applies a multiplier of 10x, 5x, 3x or 2x to the current winning spin. Each consecutive Rolling Reels win will increase the multiplier by 1. There’s no limit to how high the multiplier can go.

The Forgotten Island Megaways slot has been produced with HTML5 which means that the game can be played on mobile, tablet and desktop devices as standard. The quality of the design and graphics is not lost when playing on a smaller screen. You can easily access the game on any Android, iOS and Windows device.

Microgaming is one of the biggest names in the online slots world. It has produced some of the most popular games, so you can be sure that you’re going to receive a top-notch gaming experience when playing this game. One of the latest Microgaming slots to hit the market is the 6 Tokens of Gold slot, a classic tribute to the familiar fruit slot machine. In addition, Microgaming has recently released the Juicy Joker: Mega Moolah slot, a game with 4 progressive jackpots and a classic fruit theme. Or, if you’re into some magic, try playing the Sisters of Oz WowPot slot and do your best to win the WowPot Progressive Jackpots capable of paying over £2 million when triggered.

This is a beautifully designed slot machine that has enough bonus features to make it attractive among the players. The Forgotten Island Megaways slot offers huge payouts that can be achieved by triggering the Free Spins feature. So, if you’re a fan of online slots dedicated to jungle, apes and adventure, you should try spinning the reels of this Microgaming release. Good luck!

Discover the Forgotten Island Megaways slot by claiming a welcome offer right from this page and play at top-rated online casinos.