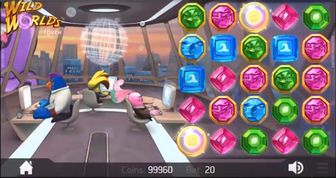 Fight monsters, unlock worlds, get multipliers and consecutive falls on the Wild Worlds slot. Play for a chance of a 100x multiplier on the bet and other prizes.

Here are NetEnt again with another excellent release. This time around, the theme is out of this world - literally. We have the brand new (2019) Wild Worlds slot which is all about extraterrestrials coming down to share their positive energy on the reels of this five by five slot. The game itself plays in the fashion of cluster pays, which has been seen before in plenty of diamond, jewel and candy slot games. However, Wild Worlds slot is very different because of the theme, the cast of characters and the bonuses that occur on the grid.

The premise is, these extraterrestrials have gotten a signal in their radar that havoc is unfolding on Earth, so they jump to the rescue by hovering their ship really low and projecting an ultra-entertaining slot game that causes symbols to become wilds, burst, interact with other symbols and collapse. In fact, the type of play is the famed "falling reels" in which the consecutive wins leads to multipliers and bonuses.

Then there is the ship crew to the left of the grid which sits calmly, maintaining the situation under control so that the molten monster outside doesn't destroy us all. However, occasionally. one of these characters intervenes with their magic power by turning all but the same color symbols into ash, thus leaving the matching colors alone on the grid, where they convert into winnings.

How to Play Wild Worlds Slot

The game's surface has been arranged according to the unmistakable NetEnt formula that always results in stellar productions. This time around we have a gray layout, which works perfectly with what unfolds on the grid and next to it. All of the controls are below it. The Play button is centrally placed and to the left of it is the Autoplay button, which lets the players set a number of automatic spins, with the option of specifying a win/loss limit. To the right is the Max Bet button, just in case anyone has won a huge amount and is immediately feeling trigger-happy.

As for the ways to configure the bet on Wild Worlds slots, there are the bet levels and the coin value. These are the only two things to configure, since this is a falling reels type of game and no paylines exist. But there is the Coin Value setting, which starts at just one penny and goes up to £1.00. When extrapolated, these values give the amount of the bet per spin in the ticker below. So, with a coin value of £0.10 the bet will be £2.00 at the first level.

By raising the levels, between one and ten, the players can multiply the total bet by that many times. At the highest coin value and bet level, the total bet per spin amounts to £200. Besides this, there is the 'i' button which reveals the Paytable. This is the area where the players can find all of the symbol pays, information about the bonus feature and few other details that might mean something to some players.

We couldn't expect a half-hearted try from NetEnt so our high expectations have been met. In terms of graphics Wild Worlds does it well providing a burst of eye candy filling the entire playing surface. Not only is there enough going on on the grid, but there is the surface to the left of it, which represents the control board of the spaceship. There is even a window that peers outside it, where the players can scope out the city that is the host of all the ruckus.

The gems that comprise the gameplay have the faces of the ship's captains, but there are some elemental symbols such as thunder, water, wind and fire. Additionally, the wild symbol is also present, as well as the Spin the Wheel bonus symbol which has a tri color circle with the letter S in the middle.

How to Win Wild Worlds Slot

With few bonus games, including free spins and a boss fight, Wild Worlds offers an abundance of fun time on the reels. The potentially big winnings are made when witnessing multiple consecutive wins with the falling reels, while the bonuses add an extra bang for the buck. Whenever the players see the W symbol, they get a wild that interacts with the other symbols.

Then, landing three of the Spin the Wheel S symbol results in that bonus game, which takes the player to a world dominated by one of the elements. There the player witnesses a random occurrence of outcomes in which one of the monster bosses are fought by our extraterrestrial heroes. The strongest multiplier is to the tune of 100x, while the Wild Worlds slot free spins bonus game can be retriggered.

If you are ready to get a taste of the Wild Worlds slots action, you can start right here by claiming a welcome bonus for one of the best casinos out there.