King Of The Trident Slot

Discover the hidden riches that are guarded by the King of the Trident. This slot game by pariplay is an irregular reel-set shaped slot with 927 ways to win on five reels that have a different number of rows. The game has up to 40 free spins that are triggered once with five scatter, however, each additional scatter retriggers the free spins by one or two. The theoretical return to player is 96.00%. 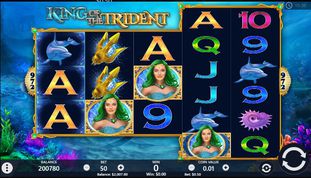 King Of The Trident Slot Online

Are you looking for Atlantis? You may find Poseidon and get his help towards the potential riches on the King of the Trident slots.

King of the Trident Introduction

Is it a coincidence that a slot game called King of the Trident is shaped like the letter T that's fallen to the side? Where's the connection? Well, that shape looks like a hammerhead shark! All jesting aside, there are indeed marine animals living on the reel set which consists of five reels, three of which have three rows and the rest have five.

King of the Trident slot was developed by the experts at Pariplay who've decided to go for a deep diving mythical adventure centered on Poseidon. The sea-god and his symbols can create as many as 972 ways to pay in this multiway slot, which pays symbol combinations of three or more, from left to right and on adjacent reels.

Besides the bonus features the game can turn up colossal symbols on the part of the reel-set that has three reels and three rows. These huge symbols are part of the Giant Reel Respin. The King of the Trident free spins game has three or more scatters trigger the bonus rounds where each additional scatter can bring extra free spins.

As we can see, the game comes with two exciting features and an additional extra in the free spins retriggering event. The symbol wins are also quite lucrative, with the best outcome paying 80x multiplied by the total bet.

King of the Trident Design

In terms of the slot design, the game doesn't warrant any laudatory remarks, however, there is a solid gaming experience on the reel-set. Even though the symbols are well-drawn they don't become animate, so that's one thing you'd have to overlook. Since that isn't such a big deal, the rest is pretty swell.

The highest point of appraisal in terms of the design is for the musical score. It seems like Pariplay have really gone out of their way to throw in a great theatrical tune that may have been bought by a movie studio.

How to Play King of the Trident Slot

Play the game with as little as £0.50 per spin when you set the coin value to 0.01 and on a bet of 50. These settings are located in the bottom panel, underneath the reel-set and the players can fiddle with the settings in order to arrive at a bet that is desirable. '

The maximum bet is £100 and it comes by way of setting the coin value at £0.20 and the bet multiplier at £500. You can change any of these values when the reels are still. To play simply hit the spin button in the bottom right corner of the screen and if you wish to play in autospins mode, use the button to the left.

King of the Trident Symbols

To view all of the game symbols and the associated pays open up the paytable. This is the same area where you will find out about the bonus features and what triggers them, and the game rules. The paytable can be accessed from the menu button in the bottom left corner.

The most lucrative symbol in King of the Trident slot is the golden trident. It pays 200x. This is followed by a literal representation of a turquoise seahorse, which pays 80x. The purple octopus pays 80x and the dolphin and the sea shell pay 50x. The symbol wins are for five symbols.

The rest of the symbols are those that belong in the lower-paying category. These are the high, or royal, cards which start at 10 and end with the ace. The two specialty symbols are the scatter, represented by a mermaid and Poseidon, who is the game’s wild.

How to Win King of the Trident Slots

Winning the game is a matter of lining five symbols on the reels. This can occur with two or three symbols stacked on one reel, with the rest distributed on the subsequent, that is, adjacent reels.

King of the Trident Bonus Features

The mermaid represents the scatter symbol. When you get three of these symbols anywhere on the reel-set the game will trigger eight free spins. Four mermaids equal 12 spins and five scatter symbols bring a whopping 40 free spins.

If you get one scatter the King of the Trident slots brings up two additional spins. Get two scatters and the number of spins is doubled. During the free spins the last two reels are fused together and the symbols occur on both reels.

King of the Trident Closing Thoughts

The players get an increased chance for a win when there are double or triple symbols. In the base game the left portion of the reels is colossal and during the free spins, it is the right section. That means both modes of play can come with increased chances to get a strong winning outcome. Other than that, the symbol pays are decent as long as you are getting the picture symbols.

Claim a welcome offer at either one of the best online casinos in the UK and play this and other slot games.