Charlie Chance in Hell to Pay has five paylines, which improves the dynamic of the three-reel layout. The first promising detail is that the game comes with a wild symbol. The second promising fact is that the wild symbol can come with a multiplier, and that these can cross-multiply towards a greater effect on the winning outcomes. Furthermore, a set of respin features spice up the play, and of course there is payout potential we had mentioned at the top. 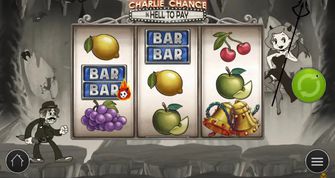 There are lots of sixes on the paytable, as well as a maximum payout potential of 6,666x, but let's not ogle for occult tidbits on the Charlie ChanceL In Hell to Play slot. Play'n GO have created an old-school three-reeler and given it a modern twist, thanks to the Feature Board which contains five extra features and a lot of fun-loving spins.

The game is set in a cavernous place underground that is meant to represent the lower levels of Hades' residence. But the only hellish thing about this Play'n GO game is the imp that's sitting on Mr. Charlie Chance's shoulders. Yes, there is a girl involved in the story and she is this bedevingly beautiful bird with an air of the 20's and 30's glam.

The theme of this game is a clash between the unmistakable American cartoon drawing style of the 1920's and 1930's, and a fruit theme, which is itself unmistakably original in the world of slots machines. Concidentally or not, both ideas date back to the same period in history and Play'n GO have made them fit together like hand in a glove.

Charlie Chance In Hell To Pay slots has another theme. The caricature on the left has done something to warrant his place on the banks of the Styx. Perhaps Charlie Chance is the fictional detective Charlie Chan from the roaring 20's, or Play'n GO simply loved the name. Whatever it is, they've produced one of the better-looking and potentially popular three-reel slots of 2020.

How to Play Charlie Chance In Hell To Pay Slot

The controls at the bottom of the screen hold everything that's needed to get the game underway. The big green Spin button is in the bottom right corner and immediately next to it is the autoplay button. On the left is a window where the amount of the current bet is shown and in the opposite corner is the amount of the balance.

Choosing the bet is done in a jiffy. Simply select one of the blocks that contains a bet amount and then press the play button to make the first wager against the Charlie Chance In Hell To Pay slot. The range available bets starts at only £0.10 per spin and has a maximum of £100.00.

One way to play the game is through the autoplay mode. Select the corresponding button and choose one of the buttons that has the automatic spins on it. There are few other options in that menu, such as to set one or more conditions which will stop the spins when or if they've been met during the game.

The very bottom left corner of the screen has five buttons that toggle on or open the setting for sound, fast spins, game rules, history of spins and the menu.

How to Win Charlie Chance In Hell To Pay Slots

The five paylines that are drawn across the 3x3 reel-set. The fruit slot identity carries symbols such as grapes, cherries, lemons and apples, which comprise the low-paying symbol category. The other end of the equation has a mean set of bells, the BAR symbol and triple sixes.

In terms of value, the most lucrative symbol are the bells, in other words, a combination thereof, consisting of three symbols or one or two symbols joined by wild or wilds. The bells pay 4x multiplied by the bet. The remaining symbols pay lower amounts.

Charlie Chance in Hell to Pay slot has more than just one wild symbol, and we'll look into that below.

A regular wild symbol substitutes for any of the symbols on the paytable, except the scatter. The wild can occur with a multiplier value attached on it that can be either x2 or x3. The best part about the game is that the multipliers cross-multiply, so when more than one multiplier wild lands on the screen, and there likely is a winning outcome, the win amount is getting a very nice boost.

The game has a free spins feature, but this is only one of the five features that are displayed on the board: guaranteed win; respin with a random number of wilds; respin with wild multipliers of x2, x3 or x25; and a cash prize.

To trigger the features board there needs to be an outcome with three scatter symbols, which are represented by the pretty girl symbol.

The game will be available as a free play demo slot at the online casinos that host demo slots, which is where players can try the game out for free.

This game is all about the multiplier wilds. Five extra features sounds amazing, but they don’t trigger too often. On the other hand, whenever the bonus hits, a big win potential may be in sight.

Discover the Charlie Chance in Hell to Pay slots by claiming a welcome offer right from this page and play at top rated online casinos.