Get into the spirit of gaming with the Coywolf Cash slot. This Play'n GO slot has 50 paylines on five reels and comes with the possibility of triggering a free spins bonus and a reel-modifier. In both instances the coywolf wild symbols can work their magic on the reels and realize the high variance possibility.

Walk the woods to encounter some animal spirits on the Coywolf Cash slots. Play for a chance to win up to 4000x on your winning bet.

Excited about this 2020 Play'n GO release? The game is going to turn some heads and not only with its stunning graphics. Coywolf Cash slot is a story about all the animals that were holy to the natives of America. A reel-set filled with fierce symbols spin for the probability of returning wins consisting of three symbols, or more, across 50 or more paylines.

The central symbol has been spun around a curious animal - a mix between a coyote and a wolf - the coywolf is as pretty as it is and also marvellous in terms of its social habits and the structure it forms. In terms of the game, this is the most valuable symbol which comes in two wild symbols. 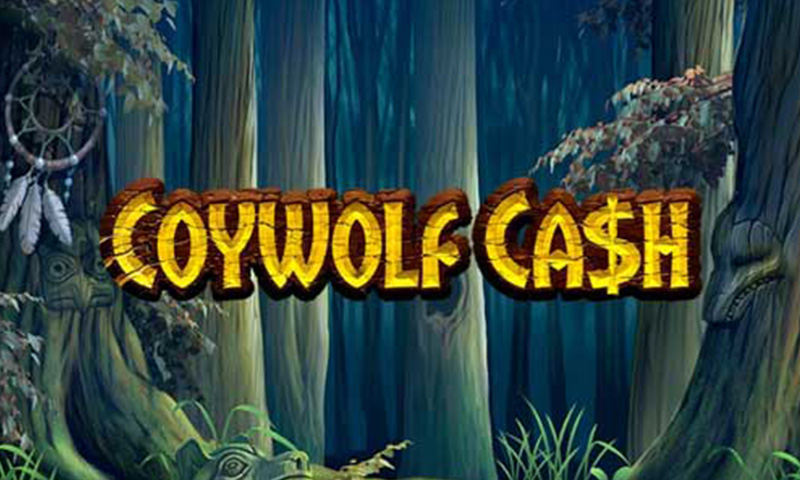 Coywolf Cash offers the familiar Play'n GO layout where the players can select from a range of bets. The volatility or variance has been turned up to the max, much like other high-paying slots by the same company. Multipliers of up to x7 on the wins and a maximum payout of 4000x makes for a decent gaming experience.

This time around the players are treated to a full-blown immersive graphics that turn and move when win events appear. Each win outcome is announced by light effects and animation, making the animals on the reel-set come to life.

Coywolf Cash slots has a rather stunning reel-set. A wooden frame is flanked by eerie totem birds and arrows and peace pipes. The bottom of the screen has been reserved for the controls. There is a musical theme that fits the graphics design and creates an even better environment for a slots experience.

How to Play Coywolf Cash Slot

The layout is quite familiar as it stays in character from previous releases by the same company. The bets can be selected from the bottom of the screen.

To initiate your adventure on the reels press the green, round spin button in the bottom right corner. To the right of it is the button for the autoplay mode. Press it to open up the menu and choose the number of automatic spins and set conditional stops, such as on a total loss or a single win amount.

There are few buttons in the bottom left corner. There you can speed up the spinning of the reels by toggling on the thunder button, turn off or on the sound and view the spin history. The 'i' button opens up the paytable where you can view gameplay information and payouts.

How to Win Coywolf Cash Slots

The high-paying symbols category consists of animals that are revered by the natives of America: bear, panda bear, eagle, lynx and fox. The bears are the highest-paying symbols in this category with 1.6x multiplied by the winning bet.

Some players will call out the meagre pay but then we must take into account the two wild symbols and the possibility of multipliers of up to 7x on the wins. This is when the Coywolf Cash slot can bring out its potential to the fore.

The wild symbols, which substitute for any other except the bonus symbols, are the coywolves portrayed in different elements. One of the wild symbols pays 6x and the other 30x and has the tendency to appear more than just a couple on the reel-set.

In fact, one of the wilds comes stacked on the second and fourth reels in both the base game and in the Prey mode of the free spins bonus.

There are two features that can bring out the best in the game. One is a reel modifier that is triggered by the totem mask symbol. This symbol appears only on the third reel and it takes only one for Coywolf Cash to trigger the wild reels. This way multiple wilds can end up on the reel-set, paying the eventual cash prizes and connecting with the rest of the symbols when available.

The totem symbol landing in three, four or five instances triggers eight, 11 or 15 free spins. The mask in the middle reel can trigger the wild reel feature, but in the bonus game this feature spins twice for the maximum potential effect. Up to four alpha wilds can land during the feature, as well as the coywolf wilds which can bring up to 7x multipliers. The scatters can additionally trigger two or four extra spins and there is no limit to these appearing in the bonus.

Play’n GO have made a very entertaining online slot that can deliver high pays owing to the high volatility. Patience is the name of the game for players who want to keep Coywolf Cash as their favorite, because the potential for notable wins in the base game comes with the feature wilds, while the free spins bonus is another dimension where lucky players can score big.