Reveal the curse behind the famous Egyptian dynasty passed down through many generations with Curse of Anubis, an online slot game powered by Playtech. Meet the Egyptian god with a human body and a jackal head and play with up to x25 multipliers and expanding wilds.  Maybe wilds don’t expand during the Free Spins game, but they sure can boost your payout if you collect enough of them. Find out more about the win potential and gameplay in our detailed Curse of Anubis slot review.

Playtech has decided to pay tribute to the Egyptian god of the Afterlife and released the Curse of Anubis, a 5 reel slot machine with 50 paylines and high-value symbols. This title looks back thousands of years ago when Anubis was first an embalmer, meaning that he was the person who ushered ruler’s souls into the afterlife. Later, he became the God of the Underworld. In the Curse of Anubis slot, he’ll expand its size on the middle three reels and turn the whole reel wild. These expanding wilds also come with multipliers attached to them, so you’ll definitely look forward to seeing Anubis on the reels more often. Sunset scatters trigger the Free Spins round where wilds are collected in a metre. Finally, these bonuses offer the biggest chance to trigger the maximum win of 3,750x your stake.

About Curse of Anubis Slot

The Curse of Anubis slot by Playtech is a slot game themed around Egyptian culture and the gods who ruled over Ancient Egypt. This time the main protagonist is Anubis, the God of the Afterlife who many feared and thought that brings evil to the surface. However, that’s not the case, as Anubis helped judge souls after their death and guided them into the afterlife. As stories and legends say, he was a prominent figure that kept evil out of Egypt. 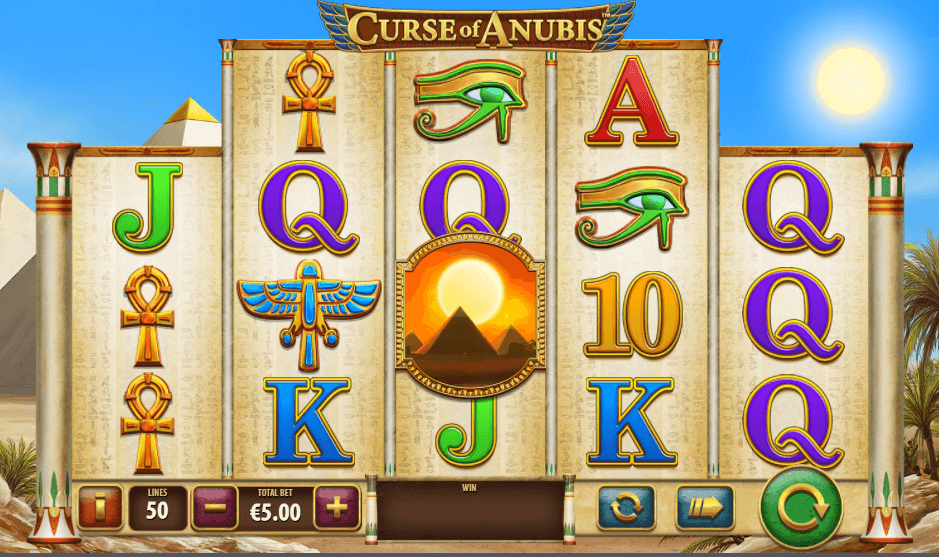 This online slot is played on an unusual 3x4x4x4x3 grid and offers 50 active paylines. To win, you need to match at least three symbols on a payline, starting from the first reel. The biggest potential to trigger a big prize or win the maximum 3,750x your stake comes from the Free Spins bonus game, which we’ll discuss in a bit.

But before you dive deeper into this ancient adventure, make sure your bets are adjusted in the range of £0.25 to £500 per spin. This level is suitable for both experienced players and beginners. However, we advise you to set your bets per spin at a reasonable pace, as the variance of this slot game is relatively high. The Anubis wilds are central to the reel action, as they play an important role during the bonus game. Moreover, they apply generous multipliers when they expand their size on the middle three reels.

As the Curse of Anubis slot is an Egyptian-themed title, expect that its design is abundant with warm and gold tones and colours. The reels are set on a desert landscape while you can see the pyramids behind them. Even their unusual setup will remind you of an ancient temple or pyramid entrance, which is a nice detail. The bright sun really contributes to the template’s rich feeling, while the free spins round plays under the moonlight and bright starry sky. The ambient, oriental soundtrack complements the atmosphere and is a good fit for an ancient theme. 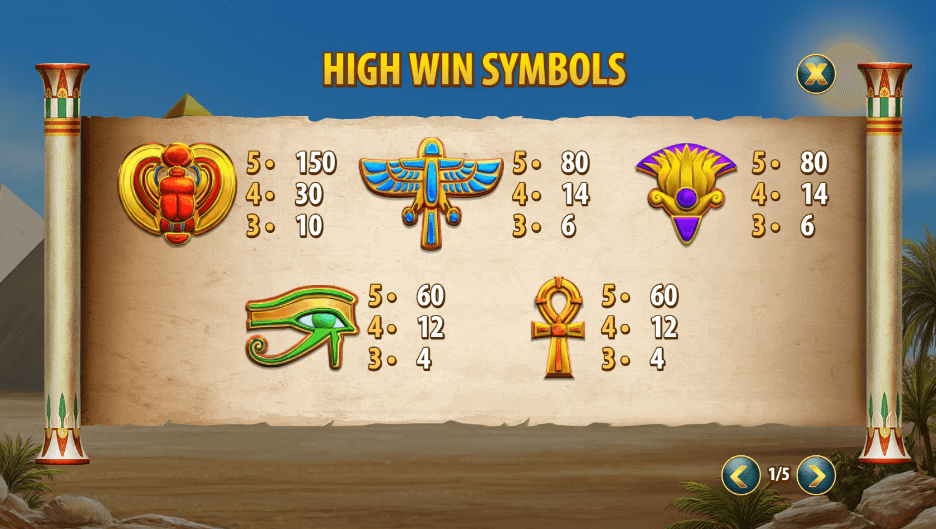 On the paytable, you’ll notice standard A-10 royal symbols. The high-valued symbols include scarabs, Ankh, Horus, the Eye of Ra and a Lotus Flower. The scarab beetle is the most rewarding symbol on the paytable, winning you 150x your bet for 5 of a kind. Anubis is the wild symbol, while the picture of a sunset represents the scatter symbol. As usual, wilds serve as a substitute for other symbols when they can form winning combinations. In the Curse of Anubis slot, wilds expand in a reel size during the base game and land with a multiplier attached to them. The sunset scatter symbol triggers the free spins round where you have the greatest chance to trigger a prize of 3,750x your bet.

RTP, Variance and Payouts for Curse of Anubis Slot

The theoretical Return to Player percentage of the Curse of Anubis slot is 96.02%, which is straight up the industry average. The variance tends to be medium to high, so expect bigger wins from the two bonus games on offer. All in all, you can end up winning up to 3,750x the stake from a single spin, thanks to the powerful wild symbols. We can’t leave behind the multiplier that can significantly boost your total and go up to 25x your bet. If you want to learn more about RTP and variance models, read our detailed Variance, Volatility and RTP guideand see which slot game suits you best.

Gameplay and Features on Curse of Anubis Slot 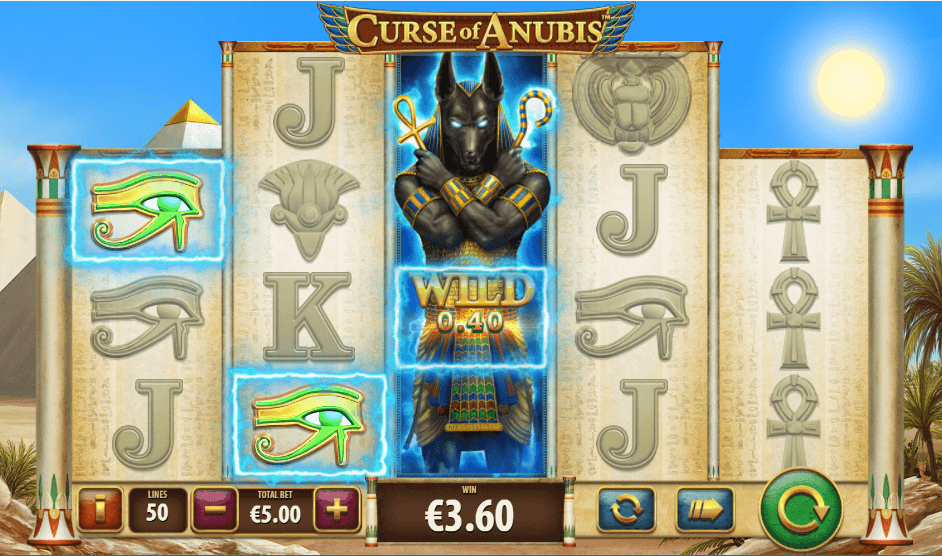 As we mentioned earlier, Anubis is the central action to the reels of the Curse of Anubis slot. It represents the wild symbol that expands in size during the base game. During the free spins round, they’re saved until the end of the round for a generous payout calculation. Now, let’s go through the details:

The striking animation of Anubis will frequently land on the reels to enrich your gameplay in general. Even though it doesn’t pay prizes on its own, it acts as a substitute symbol to complete a winning sequence. As an interesting trivia, the dark skin colour in Ancient Egypt symbolised regeneration, life, and the Nile River’s soil. It also symbolises fertility, the start of a new cycle and resurrection. The Anubis wild lands on reels 2,3, and 4 and expand to turn the whole reel wild. They also land with a multiplier attached to them which can go up to 25x. When more than one expanding symbol lands on the same spin, the highest value is applied to your payout.

This feature is triggered as soon as you land 3 sunset scatter symbols on the same spin. You’ll receive 10 free spins, and during these spins, any wilds you land on the grid are collected and kept until the end of the round. If more than one wild lands on the same position during free spins, you’ll apply a multiplier to that position. This multiplier can go up to 10x, depending on how many wilds have landed. After the last free spin, a final calculation is made with all the wilds and multipliers in place.

Curse of Anubis Slot on Mobile

The Curse of Anubis slot by Playtech is optimised to play on all devices, including mobile, desktop and tablets. The simple gameplay and clean-cut design land well on a smaller screen, so you won’t have problems with the navigation or the quality of this slot game’s interface.

Playtech is probably one of the biggest names on the slot game market. Historically speaking, their titles are among the most popular slots. We’d like to recommend some of their latest slots on offer for you to explore. If you’re a fan of the mystical Mayan culture and civilisation, make sure to check out the Mayan Blocks slot for a chance to land a win of up to 10,000x your stake. From the fairytale point of view, we’re sure you’ll love their take on the Arabian culture with the Djinn of Storms slot. For those that have been following their Kingdoms Rise series, explore the gameplay of the latest sequel called Kingdoms Rise: Battle Beast that features bonus rounds and fixed Jackpot prize.

The Curse of Anubis slot is definitely a refreshing addition to the big and competitive list of Egyptian-themed slots. Even though it’s not the most volatile and impressive release regarding its payout system or in-game features, it is still a visually engaging title. The expanding wilds and their transition during gameplay is probably one of the best compared to other slots that have adopted the same concept.

Play the Curse of Anubis slot and claim your welcome offer at one of our featured casinos.

Riddle of the Sphinx