Grab a handful of fruits and play for a chance to squeeze them into cash juice on the Fruity Burst Jackpot slot. This Playtech game has five horizontal and five vertical reels. The most lucrative payout in the game is 5000x and that's for 15 or more strawberries, while the jackpot prize pays 2000x on the winning bet in a progressive manner in relation to the bet. 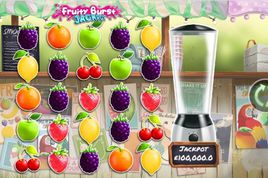 Play the Fruity Burst Jackpotslotfor a chance to win some or all of it on this Playtech sequel to the original game.

Fruity Burst slot was one of those slot games that existed completely under the radar. Many online casino players did not bother batting an eye on this game, but a group of pros did. Part of the backstory is that the original slot game, developed by Playtech, existed at just few online casinos. But some people enjoyed playing it and saw more to it than meets the eye, so the game took off. Not long after, some of the most prominent online casinos decided to include it on their roster.

So today we have a jackpot version of the game. Enter Fruity Burst Jackpot slot. Again, it is the same arrangement on the reel-set: five horizontal and five vertical rows that turn up a bunch of fruits for symbols. The game has produces the winning outcomes when five or more of the same fruit symbol have appeared on the reel-set in a cluster. If they connect-they react.

The most lucrative symbol in the game is the strawberry. It pays 5000x multiplied by the line bet, however, this isn't the most lucrative prize. In that department, the name-giving feature of the Fruity Burst Jackpot slot is the symbol that brings the jackpot: the cherries - but more on that in just a moment.

Now you can claim a welcome offer to any of the best UK online casinos that are on the list to your right. Claim to play and have a fruity burst adventure.

When it comes to the graphics design features, everything stays the same except two thing: the fruits got their silly expressions wiped off their faces and the old man tending to the fruit stand is no longer there.

Instead, there is a fruit blender, so you guess what happens to the fruits. Otherwise, everything else will be familiar if you had played the previous game. Overall, the fruity colors bring about a cheerful layout and sits well with whoever wants to kick it back and relax with a light-hearted theme that has the potential to bring a jackpot prize.

To start the game first you need to set the bet that seems preferable to you. The coin values range between a penny and a pound, so the total bet per spin ranges between £0.10 and £0.00.

Once ready, press the spin button or select the autospins option which lets you choose from a number of automatic spins presets.

There are few more options, like to toggle the sound on or off, or to open up the paytable and view all of the symbol pays. You can access this area by selecting the three dash line from the top left corner of the site.

The Fruity Burst Jackpot slots paytable is where you can find out about the symbol payouts, the game rules and other relevant information, if you want to get acquainted before playing.

Win the game by getting more of the same fruit symbol. The payouts start at five symbols and the top payouts for each individual symbol is made when 16 or more of the same create a cluster.

By order of value, descending to ascending, the symbols go as such: orange, apple, blackberry, lemon and strawberry. The values for the optimal number of the same symbol on the reel-set are: x50, x100, x500, x1000 and x5000.

The game doesn't have any bonus features. Because there aren't any wild symbols the game gets the original six symbols, including the cherries, and there isn't a scatter, so no free spins.

The jackpot prize is made in a progressive way. Land five, six or seven of the cherries and you winning bet will be multiplied by x50, x500 or x2000.

The game has been optimized to play seamlessly on the mobile screen, courtesy of the slots experts at Playtech. The development environment is HTML so players who have an iphone or android device will have no issue launching this game from the mobile-friendly casinos that have it.

Thanks to the second installment we have a medium variance slot that comes with an in-game progressive jackpot prize. The reel-action is a standard multiway slot with cascading wins and with a clean-cut gameplay that doesn’t clutter the field with wilds or bonus symbols. What we get are six standard symbols and nothing more. These, when land in five or more instances, form the wins, where the 5000x on the bet line is the biggest win, plus the jackpot prize.

Claim a welcome offer to play the Fruity Burst Jackpot slot. Start today by taking one of the offers right from this page.