One of the more bizarre online slots is Fruity Burst slot - a grid-shaped game with fruits forming clusters and bursting for the win. The bizarre part about it - the grumpy fruits that may as well be smiling, for these have the capacity to bring the top payout of 5000x on the line bet. The game was made by none other than the slots experts at Playtech. The five by five grid game has an autoplay function as wagers that start as little as 10p per turn. 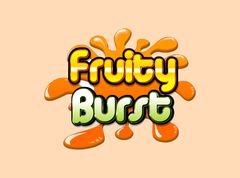 Have a fantastic time collecting fruits and turning them into real money prizes! With Fruity Burst slot from Playtech, you will definitely have fun thanks to the variant and happy colours and engaging gameplay!

With the Fruits being one of the most used symbols in the world of online slots, there simply can’t be neglecting of these games, and once in a while, you will come across one of them. If you come across Fruity Burst slot, consider yourself lucky, as the game has some awesome parameters, as well as positive feedback from players that were already spinning the reels of the same.

Fruity Burst Slot possesses five reels and 25 paylines at your disposal, and you can start to play the game as soon as you’ve selected a casino on the right-hand side and set your bet per spin, which ranges from £0.10 up to £250.00. Coming out lucky means you have scored the top payout of £5000 coins times the wager.

An arcade and slot game in one, Fruity Burst is another addition to the fruity slot games, another game inspired by the familiar symbols that were present on the very first bar-based slot machine. Fruity Blast, developed by Playtech, offers nice and amusing gameplay, and since it brings players back to the old times of fruit stands, you have to give it a shot.

With a pretty colourful design and an overall interesting idea for the slot, Fruity Burst can stand proudly about what it can offer, and for a 2015 game, it’s pretty satisfying. The Fruity Burst bonus is sweet, and the free play Fruity Burst is not just a trick. The game has a paytable that connects the winnings, so it is all clear to see the advantages in the reels.

The design revolves around a fruit stand where a kind old man sits on the right side and assists you in picking the finest fruits from the reels. On the left, we can see the winnings, while in the middle part of the screen, there are the fruits as symbols themselves. The grandpa looks like he has had enough selling fruits, but still offers the finest service, payment wise.

When it comes to the symbols, it’s pretty obvious from the name of the game, and from what we’ve already mentioned, that the symbols are all focused and revolving around fruits.

Unlike most of the online slot games that offer dozens of symbols including a wild and scatter symbols, lower and higher rated symbols and even some extra bonus symbols, Fruity Burst offers just one group of symbols.

The six symbols in Fruity Burst slot include a strawberry, an orange, a lemon, an apple, a blueberry and a tomato. They all look silly with a subtle smile, but the payouts on some of them are not a laughing matter.

If you are into slots which are jam-packed with bonus features, you'll be disappointed because Fruity Burst doesn't have additional bonus rounds. There is only one base-game feature that could be considered a bonus feature. However, this feature could get you additional spins without spending your money.

How To Play Fruity Burst Slot

It’s pretty easy to set your hands on amazing prizes as every symbol is practically the same value. Since there aren’t that many symbols, things should go positive for the slot players.

Five reels 25 paylines is all you will need to grab the best out of this game. With a denomination from as little as £0.10 up to £250.00, you can earn up to 5,000x your line bet. To start playing the game, you need to select one of the casinos that are located on the right-hand side of the review. You can see the players’ rating and the advantages and disadvantages of the casino, as well as the welcome bonus that it offers to the slot lovers.

Don’t forget to set the coin size as well, a feature located just below the reels.

Since the maximum jackpot that you can win in the game is a multiplier, it’s always a good idea to play with a higher denomination, as it will give you more lucrative prizes. Playing under the Bet Max option is a work of art as it can bring you some of the most amazing and lucrative prizes that Fruity Burst slot offers, but you have to be careful with this feature, as it can lose all of your money pretty fast because you are playing with the max denomination, coin value and level of the game. Either come up with a plan or a limit to your cash so you can control the money, or neglect this feature completely.

Click on the options just below the shopkeeper where you can set the number of auto spins and give your index finger rest, and you can set the stake per bet. The spinning of the reels is smooth and inviting, as the colourful reels make you want to eat some fruits and win some prizes.

How To Win Fruity Burst

Play for the chance to win by creating combos horizontally and vertically on the 5x5 grid on the screen. The payout of the combo depends on the value of the symbols and their number. The more symbols you land, the higher the payout. After a winning combo, those symbols will disappear and new fruit symbols fall into their places. If you're lucky enough to get another winning combo, the process will continue.

As we have already mentioned, the payouts of the winning combo depend on the symbols and their number. In ascending order, Jaffa the Orange has a max payout of 100x your stake, followed by Pippin the Apple with 150x, Chester the Blackberry with 750x, Eureka the Lemon with 2000x and Lester the Strawberry with 4000x.

The highest paying symbol in Fruity Burst is Cherry the Tomato with a max payout of 5000x your stake for the spin. For this payout you need to land 16 or more of the tomato symbols on the grid.

Fruity Burst has no wild or scatter symbols, so the game doesn't offer any bonus features. However, this doesn't mean that this online slot isn't worth a try. The bursting combo feature could be considered a sort of base game feature because it offers an additional chance to land winning combo without spinning the reels. Furthermore, it is possible to land more than one winning combo on a spin. Thus, you could land a combo of lemons on one side and a combo of tomatoes on another side.

The RTP rate is a theoretical calculation of all the bets played on a slot over a certain period of time. The percentage tells you how much a slot will pay back over the lifetime of the slot. As you would expect, the higher the RTP percentage, the more could expect to win over a period of time.

With the use of mobile devices on the rise, online slots providers are optimizing their releases for mobile screens. This also goes for Fruity Burst which has been optimized for various devices. With graphics and animations that play smoothly on almost any device, you can enjoy this Playtech online slot wherever you are. Just launch the web browser on your smartphone, tablet or mobile device and enjoy the gameplay in fullscreen mode.

This simple and pretty straightforward, yet addictive game called Fruity Burst slot is one awesome game for the players that enjoy the colourful theme, fruits, and fun times. Give a shot to the 5,000x jackpot that you can win by landing 16 Tomatoes or get satisfied with the least of 0.3x your stake with five oranges. Check this game out on some of our sites, and kick-start the winning times.

Venture back to the glorious days of the Roman Empire with Gladiator slot. This popular Playtech slot game is based on the popular film starring Russel Crowe and plays across five reels and 25 paylines. With a bet range between 0.01 and 250, you're in for the chance to spin and win the maximum payout of 5,000x your coin size.

American Dad is based on the incredibly popular TV series that follows the crazy family from Langley Falls. With a maximum bet per spin of 200.00, you can spin the reels alongside Stan Smith, Roger and the rest of this American family hoping to land the maximum payout of 250x your bet for the spin.

Finally, if you want to give Fruity Burst a try, find an online casino that offers the game and play Fruity Burst online.

Check out the online casinos featured here at Slotswise, claim your welcome bonus and play for the chance to win big on Fruity Burst!