Get a closer look at the Mesopotamian culture with Ishtar: Power Zones slot powered by Playtech. Paying tribute to Ishtar, the ancient goddess of love, beauty, war and sensuality, you’ll have a chance to experience the electrifying Power Zones mechanic played across 6 reels with over 15.000 ways to win. In addition, Ishtar’s flames deliver special reel modifiers throughout gameplay, while charged symbols transform other symbols to boost your wins. Find out more about this powerful game in our Ishtar: Power Zones slot review.

Playtech and Ash Gaming have teamed up to release a mystical ancient reel adventure called Ishtar: Power Zones slot. This time, they’re serving an esoteric title based on the goddess that moved boundaries and stigmas with her look and powers.

Powered by the Power Zones mechanic, you’ll have a chance to charge, transform symbols and match them both horizontally and vertically. Moreover, you’ll experience the Flames of Ishtar that bring three different bonus features, causing an epic reel action that might win you 10,000x your bet. Continue reading our Ishtar: Power Zones slot review so you can learn more about the features and math model.

Ishtar: Power Zones is an online slot game developed by Playtech and Ash Gaming. The developers have decided to explore Mesopotamia, the Near East region where the earliest civilisation on Earth was born and thriving. Back then, people believed in many gods, and Ishtar was one of the most worshipped among them. 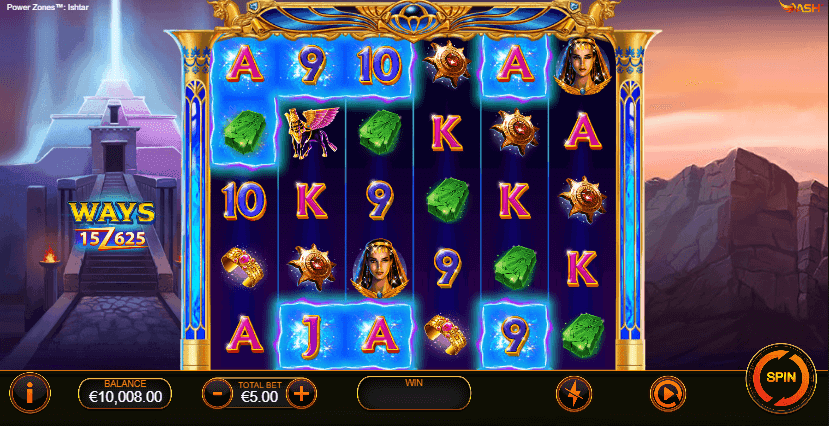 You can experience this adventurous slot game across 6 reels and 5 rows that contain 15,625 ways to win. To form a win, you need to land at least 3 symbols on adjacent reels, starting from the leftmost reel. When it comes to stakes, the developer offers a quite flexible range suitable for low and high stake players, starting from £0.20 to £250 per spin.

The Power Zones mechanic is central to the overall gameplay, where most of the wins will occur as you transform different symbols on the grid. However, the most exciting part as you spin the reels of the Ishtar: Power Zones slot comes as soon as you trigger the Flames of Ishtar reel modifiers. Depending on the colour of the flame, you’ll receive a different pack of boosts+multipliers which we’ll explain more in a bit. Considering all in-game features and modifiers, the most you can win in this bonus game is set at 10,000x your bet.

As we mentioned at the beginning, the Ishtar: Power Zones slot is based on the ancient Mesopotamian goddess of love, beauty, war and justice. Although this combination of power traits is quite unusual, it blends pretty well as soon as you start the slot game.

The reels are luxuriously designed and framed in gold, while from the left side, you’ll see a glorious temple made in honour of the goddess. The right side of the reels pictures the mountain landscape of the East, giving the template a mystical, oriental feel. Accompanied by the Arabian soundtrack in the background, every detail favours this slot game’s quality. 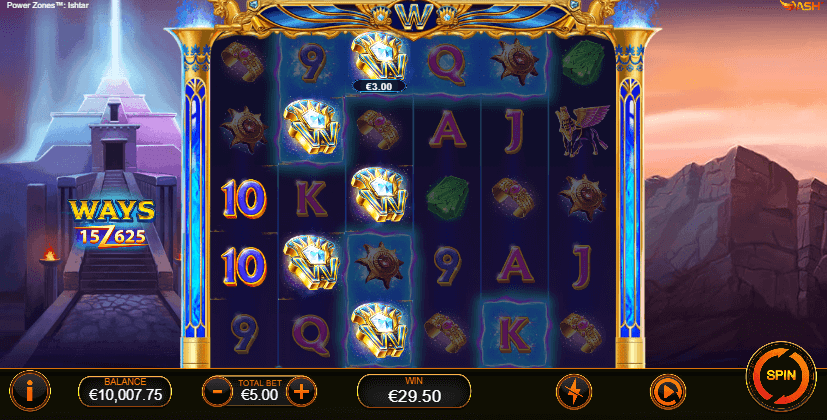 On the reels, you’ll come across low-paying A-9 symbols accompanied by different jewels and a winged horse. Ishtar is the highest-paying symbol in the collection, winning you 1x your bet for 6 of a kind. There’s also a wild symbol that will help you form wins more easily. However, this symbol comes into play only during the bonus Random Wilds feature explained below.

The Ishtar: Power Zones slot’s RTP (Return to Player) is 95.62% which is a little below the industry average of 96%. Moreover, the variance is high, with the bigger wins coming from the large number of ways to form wins. There won’t be frequent wins during gameplay, but once you trigger a win, it will be of a higher value.

The biggest wins will come from the bonus game. The maximum win in the Ishtar: Power Zones slot is 10,000x the stake. If you want to learn more about other RTP and variance slot models, read our Variance, Volatility and RTP guide.

The main bonus features in the Ishtar: Power Zones slot game revolve around the Power Zones mechanic. This mechanic also supports the randomly triggered bonus modifiers, which become active as soon as you lit a different Ishtar flame. Let’s go through the details and see how these extras and modifiers will work for you.

This mechanic works in a way that powers randomly selected symbols on the reels. These symbols then turn their position into a Power Zone, which can connect both horizontally and vertically. This way, the engine can create an even larger Power Zone on the reels. If you land a charged symbol in the Power Zone, all symbols inside it will transform into the triggering charged symbol.

Watch out for the thunderstorms and lightning strikes coming from the temple, as they’ll randomly activate the Flames of Ishtar features. Depending on the colour of the lightning strike, you’ll have a chance to play with one of the following reel modifiers: 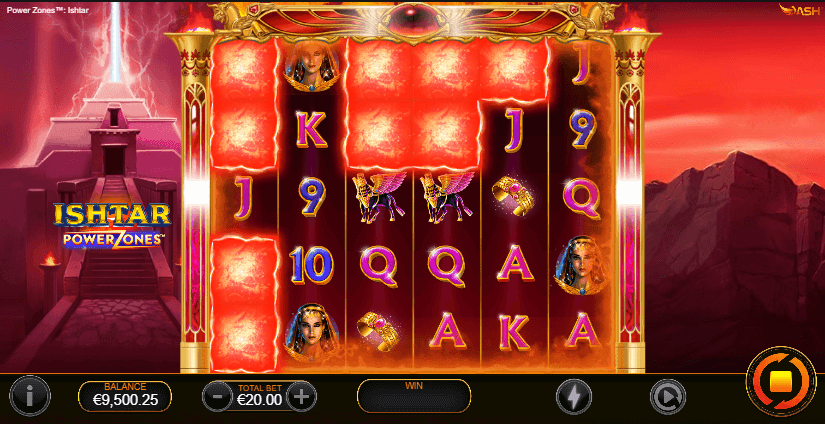 Random Wilds: the mechanic places a random number of wilds on the reels so you can form winning combinations and boost your total amount

Goddess Mode: In this feature, you’ll receive series of respins where the symbols inside the Power Zones will transform. Every Power Zone transformation will increase the value of the multiplier shown at the top of the grid. At the very end of this round, you’ll win one Fire spin.

Fire Spins: When the screen becomes red, all symbols in the Power Zones will transform into one randomly chosen symbol. If you play Fire Spin in the Goddess Mode, the accumulated multiplier will be applied to your total.

Ishtar: Power Zones is optimised to work on all mobile devices, and it loads on any operating system without issues. The developer designed this game with HTML5, which makes it adjustable on any mobile. The quality design, gameplay, and bonus features work perfectly on a smaller screen.

Playtech is one of the market leaders when it comes to producing online slot games that appeal to many players. Check out some of their recent releases and discover different math models and bonus features.

Inspired by the Ice Age, Playtech will take you to prehistoric times to explore the Absolutely Mammoth slot. Here, you’ll have a chance to win free spins, admire the clean and sharp visuals and win up to 10,000x your bet.

If you like to take a closer look at the African wildlife, make sure you read more about the Rhino Blitz slot, a volatile slot machine that might win you up to 1,000 spins during the Free Games Feature. While you’re there, check out Gold Pile: Orangutan and test the win potential of this game, where you can win one of the three fixed jackpots on offer.

It’s quite refreshing to see that developers explore different eras and civilisations as the inspiration for their next slot releases. Ishtar: Power Zones combines the relatively new but quite popular Power Zones engine alongside the mysterious side of the Mesopotamian culture. In our opinion, they did a great job and created a potential success!

Even though the RTP is below the standard rate, the math model stands solid as you can win 10,000x your bet. If you’re curious to explore more slot games similar to this one, make sure to check out the Stallion Strike slot, which also offers decent gameplay and win potential.

Explore the Ishtar: Power Zones slot by claiming a welcome offer right from this page and play at top-rated online casinos.