Visit Ancient Egypt and try to find the hidden treasure in the latest slot game created by Playtech. This developer announces their third slot in the Power Zone series called Pyramid Valley Power Zone. This mysterious journey is charged with sticky Power Zone positions, transforming symbols and free spins and has the power to win you 5,000x your bet in a spin. This is not your typical Ancient Egyptian expedition, so stay with us as we explore the volatile zones in this Pyramid Valley Power Zones slot review. 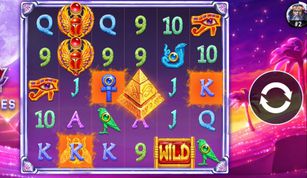 Playtech returns to their Power Zone slot series with their third instalment called Pyramid Valley Power Zones. Following the previous success of Legend of Hydra Power Zones, this time, the developer takes you on a trip to Ancient Egypt on six reels and more than 15,000 ways to win. This game’s highlight is the charged symbol that transforms all symbols in the Power Zone into the same matching symbol. Moreover, the Free Spins round will give you a chance to win unlimited retriggers, all for the final goal-to land a big prize. Find out more in our detailed review below.

The Pyramid Valley: Power Reels slot is an Egyptian-themed title set in ancient times. You’ll have a chance to visit the mysterious valley and collect decent wins hidden behind the 6x5 grid that offers 15,625 ways to win. The desert, pyramids and reels look like they’re made of gold, focusing on the side of the fortune rather than the historical background. To win, you need to match three or more symbols on adjoining reels, starting from the leftmost reel.

When it comes to stakes, they range from £0.10 to £300 per spin. This range gives you plenty of options and enough space to plan your betting strategy according to your budget. Just click the coins on the right side of the reels and use the + and – buttons to adjust your preferences. Apart from the Power Reels mechanic, this game comes with several bonus features that enrich the base game and power up the model during the bonus rounds. Here we have the charged symbols that trigger the Power Zone feature, random strikes on any spin, free spins and Mega spins that deliver a maximum of 5,000x your bet.

As the title suggests, the Pyramid Valley Power Zones slot is set during Ancient Egyptian times. As soon as you start the game, you’ll be overwhelmed by the golden tones and shades of the template, giving the rich, abundant feel to the design. The developer did not exaggerate with the graphics, as the reels are the only thing you should be looking at during spins. In this Valley of the Kings, you can hear ambient, orchestral music in the background, which complements the overall mood.

On the paytable, you’ll find standard A-10 royals along with a collection of Egyptian hieroglyphs. The Eye of Horus and scarab beetle are the premium and most rewarding symbols on the paytable. Also, this game features a wild symbol that replaces standard symbols on the grid and a pyramid scatter that triggers the Free Spins feature.

The RTP (Return to Player) of the Pyramid Valley Power Zones slot is 95.36%. This ratio is slightly lower than the industry average. On the other hand, the game has a high variance, so wind won’t be frequent during gameplay and expect longer rounds of losing spins. However, when you do form a winning combination, the prize will be bigger. The maximum win you can get out of this slot game is set at 5,000x the stake. If you want to learn more about different slot models, check out our guide about Variance, Volatility and RTP in online slots.

In the Pyramid Valley Power Zones slot, the action revolves around the Power Zones mechanic and its power to transform the symbols in both the base and bonus game round. Also, here are the scarab symbols that split on the grid to potentially activate new power zones. Of course, as the standard bonus treat, we have the Free Games feature, or best known as the Free Spins round. Let’s move on to the details and explain these features better:

On any random spin, you can notice charged symbols with flaming frames. These symbols trigger the Power Zone feature. Here, the scarab symbols play a vital role, as it shifts to an adjoining position and expands the Power Zone’s size. Scarabs can move up to 6 times on the grid unless they disappear before that. If you land a charged symbol, all positions in the Power Zone will transform into the matching charged symbol. After this action, the gameplay goes back to its initial state.

During spins, scarab symbols that land on the reels split and create 1 or 2 new scarabs. These Scarabs activate new Power Zones for a chance to boost your total, and this feature is known as the Scarab Strike.

This feature is triggered as soon as you land 3 or more pyramid scatters on the reels. The more scatters you land, the more free spins you’ll play with, and you can win up to 30 free spins.

The exciting moment here is that the triggering scatters create Power Zones during this bonus game. One of them will become an expanding symbol, while others will remain sticky. These Power Zones are not removed once symbols transform on the reels, and also you can trigger the Scarab Strike feature. There’s a chance to retrigger this feature and add more free spins to your total. Land 2 pyramid scatters, and you’ll add 3 free spins, and in theory, there’s no limit on how many times you can retrigger it.

This feature steps forward as soon as you use all your free spin. Then, you’ll have a chance to play one Mega Spin where all Power Zone positions will modify into the same matching symbol for a new payout boost.

Playtech has released a powerful and volatile slot machine in terms of its design and gameplay. Therefore, you can be sure that Pyramid Valley Power Zones is a mobile-friendly slot and can be played on any operating system. It is developed with HTML5, which ensures a quality gaming experience on both desktop and mobile devices.

Playtech is one of the market leaders that produce quality slot titles with immersive, engaging gameplay attractive to slots players. If you’re familiar with their Kingdoms Rise series, check out their newest instalment called Kingdoms Rise: Battle Beast. This fantasy-themed action packed with several bonus features and progressive jackpots can win you 10,000x your bet. If you like to participate in a pirate expedition, then the Buccaneer Bells: Fire Blaze Golden slot is the perfect choice for you. This title features 4 fixed jackpots with golden respins and free spins that can bring you decent wins. Finally, check out the latest Gem Splash release called Gem Splash: Kings Court. This medieval, retro title also features 3 progressive jackpots, along with bonus symbols and generous multipliers attached to them.

The Pyramid Valley Power Zones slot is an excellent addition to Playtech’s Power Zone series. The gameplay seems a bit confusing at the start with Power Zones and their presence in both the base and bonus game. However, once you start to spin the reels, you’ll realise that this title comes with straightforward rules of play. The maximum payout of 5,000x your bet is decent, considering the math model. Overall, if you’re a fan of Egyptian-themed titles, we recommend you explore the potential of this slot and see how you’ll like it.

Explore the Pyramid Valley Power Zones slot by claiming a welcome offer right from this page and play at top-rated online casinos.