The base game has 20 paylines that are always active. These spin across a reel-set of five reels and four rows. However, if you get the free spins bonus, the reel-set stays the same but the number of paylines doubles to include 40. The players play Release the Kraken for prizes that can get as high as 10,000x multiplied by the winning bet. 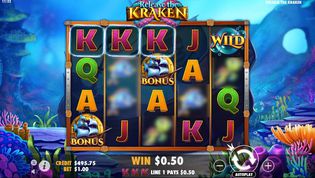 Discover the sea bottom and the treasures it may be hiding when you play Release the Kraken slots.

Dive deep to the sea bottom to spin the reels on the latest reel adventure by Pragmatic Play. The game takes to a pristine world of coral and fish, that is also inhabited by the creature that holds the key to the potential big wins. Besides the cash prizes that can be won during the base game, Release the Kraken slot also has a free spins bonus.

A game that has an cryptic name such as Release the Kraken slots should entail rugged pirates, a diving contraption of some past age a gulley, harpoons and similar items, but instead we have a set of smiling fish and one mean, Cthulhu-like Kraiken which appears on the wild symbols.

Pragmatic Play have created a quiet and picturesque sea bottom, filled with coral, rock formations and bubbles. The symbols are still on the reels, until they become part of a win outcome, in which case they bulge up in a simple animated sequence.

In many respects the game reminds of other productions by the same company, but one thing is common for all of these as well, and that is the dynamic gameplay and the high volatility.

How to Play Release the Kraken Slot

Your endeavor to the potential riches can begin with the push of the Spin button, which in all Pragmatic Play slots is located in the bottom right corner of the screen.

This is where the players are also going to find the minus and plus buttons and the Autoplay label. These settings are concerned with setting up the bet and setting up the automatic spins mode respectively.

Before you start playing Release the Kraken slot, you want to first select a bet from those that are available. Press either the minus or the plus button to open up the setting.

When you go through the Total Bet button you can set up the bet directly. If you want to fine tune it according to Coins Per Line and Coin Value you can use the respective buttons.

The Coin Value begins with one penny per payline, while the maximum amount in that regard is half of a pound, euro or dollar, depending on the casino's jurisdiction.

The setting above it multiplies the coin value per the number of paylines, so, the smallest bet equals £0.20 and the biggest bet in Release the Kraken is to the tune of £100.00 per spin.

Configure the automatic spins mode by pressing Autoplay in the same area. This is where you can set the game so it does the spins on its own. Optional settings are stop on a cash decrease, stop on a bonus feature, stop on a single win amount, and so on.

How to Win Release the Kraken Slots

Wins are made on any one of the 20 paylines and there is the possibility for multiple payline wins resulting from the same spin. The game offers payouts for three or more symbols of the same kind, and these must occur starting on the leftmost reel.

The paytable holds information about all of the symbols payouts. In that respect, the most valuable symbol in Release the Kraken slot is the game's logo, which has a golden anchor on it. This symbol pays 25x on the bet for a win of five.

The shark pays 12.50x for five, which is half the amount of the previous symbol. The turtle pays 10x, the blue marlin pays 7.5x and the green clownfish brings 5x on the bet. The set of royal cards are the low-pay category, where the smallest win is 2x and the biggest 4x when five of the same are on a payline.

Is Playing Release the Kraken Rewarding

While big wins are never guaranteed, winning outcomes are the norm when you play the game. The random number generator system guarantees that all outcomes are random, so there can be the so called dead spin, as well as winning outcomes. Players are always hopeful to score a big win. This is possible when you play Release the Kraken thanks to the features. When you land wins in succession the game can pay bigger amounts reltive to the stake.

The game has a wild symbol, which is another of the high-paying ones with 25x on the bet. This symbol substitutes for all, except for the bonus symbols.

The random feature lets you pick one of three tentacles, and the outcome is one of the following: Kraken Lockin Wilds can bring treasure chest symbols which award a prize. Colossal Kraken Wilds places a Wild symbol that takes up 3x4 on the grid. Infectious Kraken Wilds guarantees at least one Colossal Kraken wild in view.

Pragmatic Play release most of their games as free play demo slots so that players can test a game to decide whether to play it with real money.

Perhaps the symbol payouts aren’t any spectacular, but they do come to life with the help of the reel modifiers. There are two bonus features, including a free spins bonus, so the players have enough to anticipate for in this game.

Claim a welcome offer from this page and discover Release the Kraken slots at top rated online casinos.