Discover the depths of the sea and a potential shipwreck treasure on the Razor Shark slot. Push Gaming have made this release on a high variance, with 20 paylines and a grid of five reels and four rows. The smallest wager starts at 0.10 and goes up to 100.00 and there are prizes to be won as high as 25x on the winning bet. Razor Shark has three features, including a free spins bonus, as well as a top payout of 50,000x. 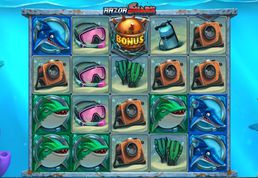 Swim with the sharks on the Razor Shark slot and play with three bonus features towards a maximum prize of 50,000x.

Shark-infested waters may not be such a bad thing after all. In fact, it may be a good thing, as long as you are playing the Razor Shark slot by Push Gaming, where sharks mean business in terms of potential big wins. This is a grid-based game of five horizontal and four vertical reels.

The symbols can fall on any one or more of the 20 always active paylines and retrieve a long range of winnings, both small, medium and huge. With a top possible payout of 50,000x multiplied by the winning bet, Razor Shark is a game that can stun even those who admire these voracious creatures.

The game comes with a set of features that comprise the overall playability. Win multipliers can act well when in concert with the mystery stacks, and there is a free spins bonus feature that can possible extend your winning wager to some better returns. 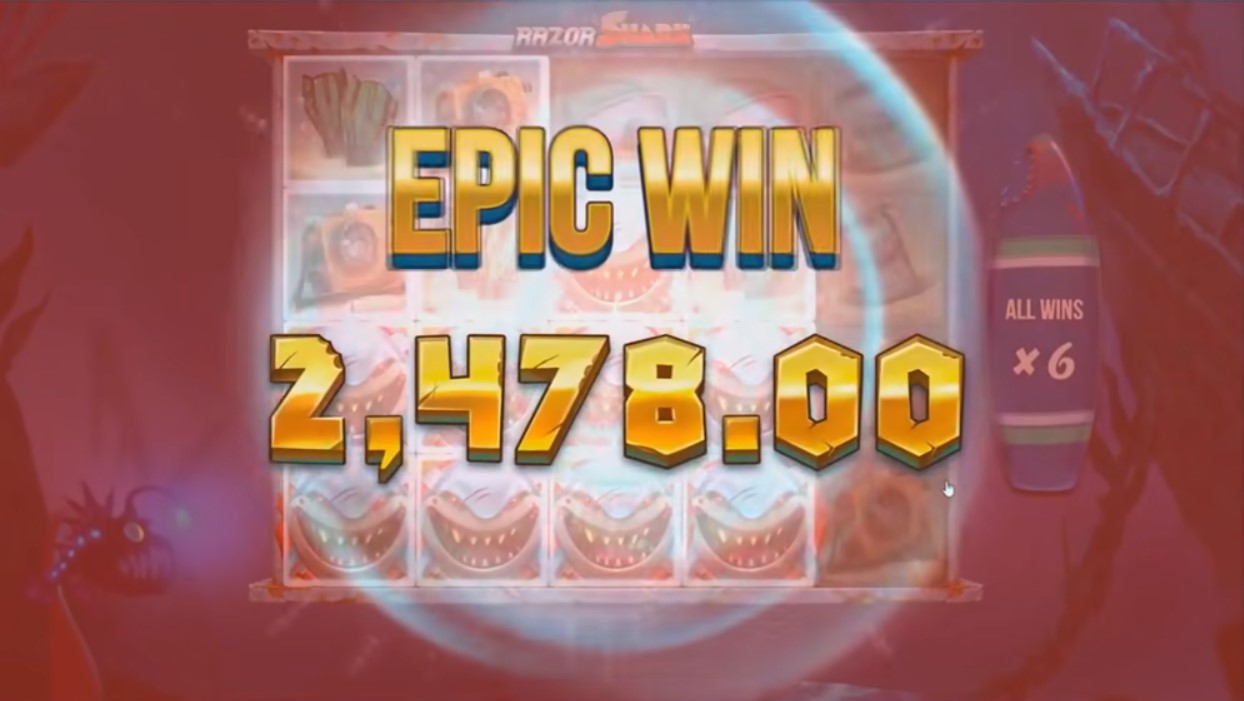 With a wild symbol that has been supercharged with a winning potential of 50x multiplier on the triggering bet, for the best outcome of five on a line, the game brings the full online casino gaming experience, and then some more.

Learn more about Razor Shark, how to set up for the gameplay, what the other winning outcomes could bring and where you can play this game.

The graphics design reflects everything there is about sharks, minus floating limbs, because, these sharks are smiling, you see. We are taken underwater among coral and couple of clownfish. It is a fitting environment for the Razor Shark slots.

But if we go even deeper we may get to see the wrecking site of a sunken ship, some luminescent medusae and a bitten-off surfboard that displays the win multipliers. The slots experts at Push Gaming have done a decent job with the sound score. It is bubbly, and swayze and fits the purpose.

How to Play Razor Shark Slot

To set up the game for your deep diving adventure, start with the Total Bet amount. This window is located in the bottom panel next to the Balance and the Win windows. For the bet per spin you can choose to play with any of the available amounts between £0.10 and £100.00.

To set the reels going simply push the round arrows that resemble the Recycle symbol. If you want to lay on the paddle board and float while soaking in the sun and the salty air, you are free to use the Autoplay option. This is where you can choose from a number of automatic spins presets, as well as set a single win or a total loss limit.

How to Win Razor Shark Slots

For an outcome to count for a win in a slot game there has to be a return that is bigger than the bet. This requires winning outcomes that are either bigger than the bet, or significantly bigger, which means winnings on two or more paylines have occurred, or winnings consisting of four or more matching symbols.

That being said, the most lucrative symbols in the game pay 25x on the winning line bet when five of the orange shark symbols land on a payline. There are three other sharks that pay somewhat less, yet still comprise the high-valued wins compared to the other picture symbols (diving mask, oxygen tank, etc.).

The most prized symbol is the wild. When it lands on five positions it pays 50x multiplied by the winning bet.

The main feature that occurs during the base game is called Mystery Stack. This is a symbol represented by seaweed, which can come in stacks of four or five symbols.

When it falls on the reel-set one of the squares of the stacked symbol will submerge below the first row, providing a chance for the symbols to link in a winning outcome.

The mystery stack can come up with the golden shark, which triggers Razor Reveal. This means, with each instance of this symbol comes a chance to win multipliers or scatters. The multipliers can be as high as 2500x.

Trigger the free spins with three or more scatters, anywhere on the reel-set. The bonus feature invites a greater frequency of Mystery Stacks on the second and fourth reels and there is also the chance for a Razor Reveal. With the combination of these two features, the prizes could reach some rather high amounts.

The theoretical return to player percentage is 96.70%. That is above the widely-accepted average for online casino slots, which is 96.00%. Both the RTP value and the designated variance can determine the 'character' of the gameplay regarding the potential payouts. Razor Shark is known for being able to make both medium and high payouts over longer play, or, for lucky players, not long since making the first dozen spins.

Over time, the RTP can become equalized or surpassed, depending on whether the payouts have brought in more versus the wagers. Nevertheless, the Razor Shark bonus feature is reputed to have a higher RTP percentage which is normal for many online slots.

We have a game that has engaging gameplay with three features which can boost the winning outcomes. The game provides a wide range of bets to choose from, so anyone can play it, either casually or for the possible win.

Claim a welcome offer to explore the seas of Razor Shark slot at one of the best online casinos in the UK.

Is Razor Shark a Ways-to-Win type of a game?

Even though the reel-set is a grid of 4x5, winnings on this game are made on standard paylines. Razor Shark has a total of 20 fixed paylines and wins begin on the leftmost reel.

There are three reel modifiers in this game: Mystery Stacks adds four symbols of the same kind on one or more reels. Nudge & Reveal follows a Mystery Stack to reveal paying symbols or golden sharks. Razor Reveal can cause the golden shark symbols to land on bet multipliers or scatter symbols.

Is there a free spins bonus on Razor Shark?

Three scatter symbols can stop anywhere on the reels to trigger the bonus. The bonus is played with two mystery stacks on reels two and four and the Nudge and Reveal modifier increases the multiplier value, which starts at 1x.