Adventure Trail comes with three rows and five reels. These spin across 30 always-active paylines that can trigger winning outcomes with at least three matching symbols. The game comes with a theoretical return to player of 96.64% and maximum payout potential of 2000x multiplied by the winning bet. 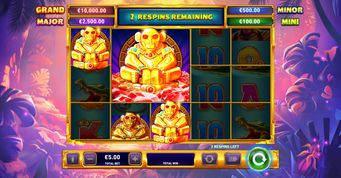 Rarestone Gaming are diving deep inside the jungle to hunt for rare stones that can produce significant payouts. As we know, Rarestone have released this game through the Playtech group, so it is going to be one that turns heads, and not least because of the four jackpot tiers. This is fully a jungle and adventure-inspired slot that puts the Aussie adventurer in the driving seat of the amazing amphibious aircraft.

Adventure Trail slot is an exciting reel adventure. The base game is quite dynamic, however, it is the reel modifiers and extra features that complete a thrilling big picture. The game has a wild symbol and a scatter that triggers a free spins bonus in addition to the respective cash prize for the number of triggering symbols. Yet another bonus symbol triggers the Fire Blaze Respin, where the players may chance upon one of the jackpot prizes.

In terms of graphic design, the game contains all the elements that make for an adventure-themed slot. The picture symbols are objects and things that can be implemented or seen on any jungle adventure: compass, map, binoculars, crocodile, and the adventurer who is head-on to collect six golden monkeys - which represent the bonus symbol that triggers the Hold and Spin jackpot game.

Adventure Trail slots is keen on capturing the best of the theme thanks to excellent graphic design around every single one of the symbols. Big win outcomes are marked with appropriate fanfare and lots of golden coins, while winning outcomes involving picture symbols cause these to jump into life. The game does more than enough to keep your attention, and we mean this both in terms of the visual effects and the potential payouts.

How to Play Adventure Trail Slot

Even though Rarestone is the production company behind this game, all of the buttons and controls are laid out according to Playtech's style. The golden bar below the reel-set keeps every single one of the buttons. The spin button is green, round and located in the bottom right corner of the reel-set. To the left is the button that turns the spins turbo.

Autoplay is the gaming mode that lets the players engage the game hands-free. Pressing that button opens up an option that has a sliding scale with automatic spins presets. The fewest automatic spins are five and the most 100. There is also option to set a stop on the spins when the Adventure Trail bonus feature has been triggered.

Adventure Trail slot displays the total win amount in the window that sits underneath the third reel. To the left of there is the Total Bet button where the players can choose a wager between 10p for the minimum bet and £500.00 for the maximum, with many amounts in-between these two.

How to Win Adventure Trail Slots

The players shouldn't be surprised that none of the regular symbols on the paytable can return the bet amount with a win of three of a kind. Royal cards pay only 0.1x of the bet for three and 0.4x for four. Five matching symbols pay 1.6x across all.

The adventurer is the most valuable of the symbols on Adventure Trail slot, paying 6x multiplied by the bet. The croc pays 4x and the binoculars 3x. The scatter is overall, the most valuable symbol, paying 50x for five of a kind.

The values of payouts are like that because this is a jackpot slot which has a free spins bonus and expanding wilds,  which makes for a balance in the odds at winning bigger prizes.

The game has a free spins bonus that is triggered with three scatters, in any position on the reels. Six spins are given when the bonus triggers, which can retrigger. Players get the benefit of playing with only the picture symbols, including that of the golden monkey, as the minor symbols are excluded.

When six golden monkeys land anywhere on the reels, we get the Fire Blaze Respin feature during which the players can win any one of the jackpot prizes.

The respins start with three spins. Whenever a monkey lands on the reels during any one of the spins, the respins reset to three. The objective of this game is to get a reel-set filled with the golden monkey symbols, in which case the Grand jackpot is triggered.

Rarestone/Playtech have released the game as free play demo slot, enabling the players to try it with free credits and get a feel of the gameplay and features.

With a top payout of 2000x and few other significant big payouts, the game is quite lucrative, however, all the big win action is possible during the free spins bonus and/or Fire Blaze respins. It is a fun game to try nevertheless.

Discover Adventure Trail slots by claiming a welcome offer right from this page and play at top rated online casinos.