1st Of The Irish Slot

The adventure to the end of the rainbow unfolds on a reel-set of five rows and six reels. This isn't the most usual layout in the world of online slots, so we are glad to see it played by Red Rake because the resul is a unique game, in fact one of the rare few that can deliver cluster wins on spinning reels. 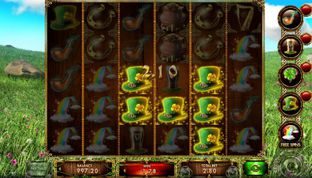 1st Of The Irish Slot Online

Red Rake are announcing an Irish summer ahead and that could mean the luck of the Irish rubbing off on the players out there who believe in it. Quite fitting for the spirit of the warm season, we have the 1st of the Irish slot. The game comes with multiple features that can improve the outcomes on the reel-set.

1st Of The Irish Introduction

1st of the Irish has a payout system with collapsin/cascading wins where the winning clusters are removed from the reels and the empty spots are filled with new symbols. What is more engaging about the game are the reel-modifiers which are powered on and utilized on the reels.

More about all of the features in the section below.

1st Of The Irish Design Features

In terms of the graphic design the designers at Red Rake simply repeat the same symbols which appear on most if not all Irish-themed slots. So it is quite usual that we see lots of harps, pints of lager, rainbows, top hats, pots of gold, clovers, etc. No surprises there, but it is quite alright because the focus is on the dynamic gameplay.

1st Of The Irish slots is a cluster-payouts game that has all design points invested on pretty-looking symbols and no animation about them, except when there is a win outcome. Each win is marked by some magical leprechaun magic. Events in the gameplay are also marked by sounds that mimic a lush meadow. Sadly, an Irish-themed song is missing.

How to Play 1st Of The Irish Slot

For starters we should mention that the reel-set feels quite cluttered in comparison to most slots. Players who take on this game on mobile aren't going to have a perfect reconnassaince of the screen, but nothing will be missed, meaning, all wins and events will be marked and known.

At the bottom of the screen are all of the windows that show various amoutns: the balance, the latest win and the total bet. The Spin button is a green gem circle in a golden frame, tucked in the bottom-right corner of the screen.

Those who wish to play the game in its autoplay mode can turn on the green rectangle button. Pressing it opens up a list of automatic spins presents. The fewest autoplay spins are five and the most available spins are 100 which is enough to kick back and relax to let the game do the spins on its own.

But before you set up autoplay, you should set the bet to an amount that is preferable to your budget. The smallest bet is eight pennies and the maximum bet is a very moderate £20.00 per spin. whatever amount is selected, it will always play across the entire reel-set, where more than a single win cluster can occur from the same spin.

How to Win 1st Of The Irish Slots

Winning at the game is achieved through making cluster wins. The smallest payouts are made with five matching symbols in a cluster. The biggest wins are made with 30 symbols on the five by six grid, meaning it needs to be filled with one of a kind symbol.

1st Of The Irish Bonus Features

There is a wild symbol in this game and it is represented by the leprechaun. It substitutes for all other symbols. The five meters representing the low paying symbols signify the progress of the corresponding reel-modifier. Each of the symbols can have a reaction on the reel-set when nine spaces have been filled.

Each time there is a win happens involving one of the symbols, the meter adds one bar. When the meter's red dot is lit, 1st Of The Irish triggers that reel modifier.

The smoking pipe adds multipliers on the reels where the pipe appears on the reel-set. The number of matching symbols determines the multiplier amount.

1st Of The Irish Free Play

The game is available as a free play demo, which enables you to try it with free credits and see if it floats your Irish parade float-boat.

1st Of The Irish Closing Thoughts

The game has a lot going on. Making symbol wins doesn’t just result in various cash amounts (from low to decent to big), but it also brings on the reel-modifiers which is where the players can expect improved chances for a bigger return.

Discover 1st Of The Irish slots by claiming a welcome offer right from this page and play at top rated online casinos.