The slots experts at Play'n Go have created full-blown luck of the Irish type of adventure on four rows and five reels. There are 20 paylines that are always active and a range of bets that provides amounts that are accessible to anyone. A high variance balances out a huge win potential of 10,000x. 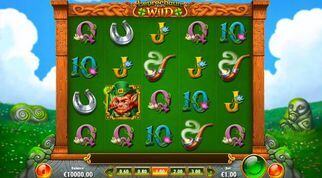 Blue skies, rolling green meadows and ancient stone figures are the things that make leprechauns happy. These conditions have been met for the leprechaun in this Play'n Go edition of this recurring theme in the world of online slots.

But behold, the Leprechaun Goes Wild slot has a high payout potential and comes with two bonus features that can shake out lucky wins in addition to such outcomes in the base game. After all, the maximum exposure is a whole round 10,000x on the winning bet, and the variance has been adequately set to high.

At the start, the players will be confused by the huge variety of symbols but this is only because there is a different wild for each reel. Ultimately they all do the same thing - substitute for the symbols and help make wins.

The Leprechaun Goes Wild slot is a typical Play'n Go game with the very recognisable layout of the controls. It looks just like an Irish luck-themed game should look.

The game features lush greens in the background, while the reels are moated with a wooden frame with Celtic patterns on them.

At any rate, the symbols have been drawn well but really, there is only one symbol that shows that real work has been done on this game, that of the leprechaun wild.

Despite the bland characteristics, Leprechaun Goes Wild slot is a dynamic game because we wouldn't expect anything clunky being released from this company.

A musical score adds an Irish tune to the reel experience but stays within the confines of what is already familiar.

The only thing that resembles the company behind this release are the controls. They are in a familiar place, at the bottom of the reel-set, where you will find buttons for the menu, sound, turbo and bet history. Buttons that are relevant to the gameplay are spin and autoplay and to an extent, the information or paytable button.

To start the reels spinning on the Leprechaun Goes Wild slot, press the green round button in the bottom right. To the right of it, there is an orange button that lets you set up the autoplay mode. This is where you choose from the presets the number of automatic spins and add some optional features that let you have more control over the balance.

To choose the bet, you need to use the minus and plus buttons on the sliding scale below the reel-set. The smallest bet is only £0.20 per spin and the biggest bet is £100.00 per spin. Given the 20 fixed paylines, these values translate to one penny per payline with the smallest bet and £5.00 per line with the maximum bet.

The orange button in the bottom left corner stands for 'information' and loads up the paytable. This is where you can view details about the payouts, the bonus features and other information. This isn't necessary but it is there if you want to get familiar with the game.

Wins are made with three symbols, or more, that belong to the same kind. These can be supplemented by the wilds which appear differently on each of the reels. Like with any other slot that has paylines, there can be more than one payline win that results from a single spin.

The game has low paying and high paying symbols on the paytable. The first category consists of the royal cards and the second is related to leprechaun imagery found in stories and legends.

The free spins bonus is one of the two bonuses and perhaps the most anticipated in the game. It is triggered by the bonus/scatter symbol, which is a four-leaf clover, otherwise known as a shamrock.

The shamrock only stops on reels one, three and five. The scatter is a wild too, so you can make a double whammy when it appears and connects with other symbols.

At any rate, three of these symbols across their respective reels provide a random number of spins which can be either 7, 9, 11 and 13.

The free spins have a sub bonus. Land two scatters to turn on the Luck of the Irish feature. In return, the players get either one wild symbol added to each of the five reels, or a third scatter is placed to retrigger the bonus.

The slots experts at Play'n GO have given the game a theoretical return to player that is just slightly above the widely-accepted average of 96%. This game's RTP stands at 96.20% which is acceptable. Since it is a high variance slot, players can expect most of the big wins occurring during the feature bonus. The base game will likely have an overall average lower RTP, which is augmented towards higher percentages during the free spins and its extra features.

Play’n Go have released this game as a free play demo slot. How long it is going to stay on the online casino rosters as a demo is left to be seen.

The game has a theoretical RTP which ranges but its default is 96.20%. The high win potential is balanced by high volatility, which means a big win is possible if you play more than just a few dozen spins, or if you are extremely lucky.

Carol of the Elves

Can I play Leprechaun Goes Wild on mobile?

Yes, the Leprechaun Goes Wild slot is available to play on all mobile devices, including smartphones and tablets. You don't have to download any particular application in order to play the game, just access it from your mobile browser on the selected online casino.

Yes, Leprechaun Goes Wild has two bonus features, one of which are the free spins. You need to land three four-leaf shamrock symbols on the reels 1,3 or 5, and you will be awarded 7, 9, 11, or 13 Free Spins. In addition, the game has the Luck of the Irish bonus feature. This feature is triggered when two scatters are landed on the reels. When triggered, it can give you either one wild symbol to each reel, or one scatter to activate the free spins.

What is the variance on the Leprechaun Goes Wild slot?

The Leprechaun Goes Wild slot has chances to win up to 10,000x multiplied by the winning bet, which gives it a high variance.