The Marco Polo slot by Red Rake gaming is a game that isn't going to impress visually, but offers excellent time on the reels nevertheless. The players will discover a five reels slot with three rows and 30 always active paylines. There is a free spins bonus feature that can offer a highest 60x multiplier on the total winnings, and not just on the line bets, and there is a top possible payout prize of 30,000x coins on the line bet. 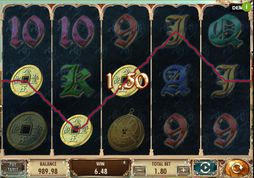 Experience the Marco Polo slots and play for a chance to win free spins bonus and a chance at the 30,000x coin top prize.

There was a man whose writings influenced many other travelers during the medieval times. It was Marco Polo who went to China and rediscovered this civilization for the European mercantilists and travelers. This resulted in many new voyages, trade and innovation. Certainly, the Marko Polo slot isn't the only thing that immortalizes this amazing historical figure, as there are schools that bear his name, and public squares and libraries. But his travels along the silk road initiated the coming of new products to Europe and the other way around. Thus we have a number of symbols dating from that age in the Marco Polo slot made by red rake.

This slot game has the standard five reels and three rows. The theme is obvious, as even the high cards symbols resemble Chinese calligraphy, while the picture symbols are a compass, a chinese coin, a hand fan, a book and the Yin Yang symbol. The game has a long and comfortable range of bets and these work across the 30 always-active paylines. So we have a fun-loving adventure here with all of the above, plus a free spins bonus feature and the choice for that or an instant win.

How to Play Marco Polo Slot

The game is easily set up and there isn't the necessity to toggle any paylines as all 30 are active at the same time. With a coin size of one penny, the smallest bet on all of these paylines is £0.30 per spin. There are many amounts that can be selected following this one, until the high limit is reached of £30.00 per spin. The range of bets provides the players with many choices upon which to build a gameplay and a strategy for those who prefer to think along those lines. With that being said, there are few other buttons that can have a say in the gaming experience.

The autoplay option lets the players choose one of the pre-set numbers of automatic spins. There isn't a loss or win limit to be set in the Marco Polo slot, like in some other slot games, but that is all right because the highest number of spins is 100, so the players just need to mind their balance or anticipate how this could play out. To make single-spin takes, simply use the orange spin button in the bottom right corner of the screen.

The Balance is kept in the bottom left corner and to the left of that window is the Paytable. This is where the players can check out all of the symbol wins, gameplay information and details about the Marco Polo free spins bonus feature.

How to Win Marco Polo Slots

The game comes with a big maximum payout prize of 30,000 but there are multiple big rewards that can be reached even on a smaller wager. One of the game's features are the free spins. This bonus feature is triggered by landing three of the yin yang symbols, however, Marco Polo slots is one of the rarest games in the world whose wild symbol substitutes for the scatter/bonus. This is the case here, with even two wilds being able to substitute for the bonus.

During the bonus, if there are additional bonus symbols appearing as three, four or five per spin, the bonus feature will be retriggered. Furthermore, there is the possibility of the entire reel being covered in the bonus symbol. In the event, the players get a 60x multiplier on all winnings up to that point.

The game's dynamic paytable reflects the symbol pay amounts according to the selected wager. If the players win five matching symbols of the Chinese coins on a bet of £3, the prize will be £100. A £50 prize comes with five compases and £25 with five of the open books.

The free spins feature comes with an amazing perk. All of the winnings get a 2x multiplier, that is double the amount that has been won, regardless if there are re-spins triggered or not. The Marco Polo wild symbol substitutes for the yin yang symbol. But before the game is even launched, the players can choose if they want to collect instant wins or let the free spins unfold.

With a theme that is less than memorable, for a slot game that is, we still have quite a decent adventure on the reels. Perhaps the symbols aren’t embellished by animation and cinematic cuts, but still, the Marco Polo slot delivers a surprisingly fun time on the reels.

Play the Marco Polo slots you claim a welcome offer to one of the casinos on this page. Join Marco Polo on a slots adventure to the far east and it may happen that you chance upon some prizes too.