Red Rake Gaming take us to the Louvre in an attempt to pull out a big heist for the Mona Lisa painting. The game has a top payout of 5000x which can result from the same spin, as well as three reel modifiers and a free spins bonus. The action on 777 Heist unfolds on a reel set of five reels and five rows that play in the cascading reels way. 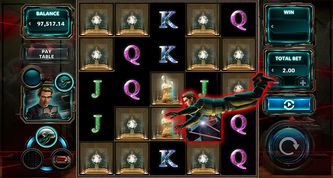 If you are ready for the heist of the century you must get up to date with the latest security-evading gadgets from the thieves guild and play for a chance to win up to 5000x multiplied by the winning bet.

The slots experts at Red Rake Gaming have created one of the best renditions of the loot-heist premises by placing you in the role of a high-profile theif who needs to get up to date with three skills that can advance the gameplay closer to the potential big win.

The 777 Heist slot plays on a reel-set of five reels and five rows which spin across cascading ways to win. The paytable contains famous works of art which can stop on the reels and trigger a free spins bonus. The main objective is to get enough winning outcomes in a succession which clears out the reel-set of the symbols and leads to the famed Gioconda, which is worth quite the pile of cash.

In terms of the graphics design, Red Rake Gaming have created a game of smooth 3D graphics that give the premise the liquidity of a dynamic online slot.

The interface that surrounds the reel-set is a high-tech device that shows the balance, win amounts, total bet and the spin button, however it also contains your progress with the skill set in the bottom left corner.

As for the symbols, 777 Heist slots has a paytable filled with famous works of art that are word many millions at international auctions, such as Vincent Van Gogh's painting of sunflowers (real-world worth of $39.85 mil) and Leonardo Da Vinci's Mona Lisa of Gioconda ($850 mil).

With its overall look and feel, the game does remind of the Agent Jane Blonde Returns slot both in theme and design.

You cake-walk through the museum's corridors can begin with the push of the spin button, which is a big round arrow located in the bottom right corner of the display. Above it you can find the blue rectangle that opens up the autoplay settings.

Before you make the first spin in the game it is best to check out the casino's pre-set default bet. Unless you want to make that sum your wager on the first spin or spins on the 777 Heist slot, you can change it by pressing the minus and plus buttons in the Total Bet window.

The latest win amount is displayed in the casino's pre-set currency in the Win window. On the opposite end is the Balance window where you can see how you are making out in the game.

If you want to engage the game hands-free and let the skillful thief learn skills on his own, you are welcome to select one of the automatic spins presets from the Autoplay button.

You can take on the game on mobile, tablet or personal computer and win in it by landing three or more matching outcomes starting on the leftmost reel. There is the possibility for more than a single win outcome resulting from the same spin.

777 Heist slot has two symbol categories - the high-paying artworks and low paying royal cards. There is also a wild symbol that substitutes for the low and high paying symbols.

The game has a free spin feature and three reel modifiers. The lead character can pick up three different skills which then come on in the form of a reel modifier that helps improve the chances for a win outcome.

THe Harness skill is another symbol-replacing modifier but unlike the previous one, it results in two wild symbols being added on the reels. This is done by the thief coming down on harnesses in a neat little video gig.

Smoke Bomb is the most, ahem, bombastic, of the reel modifiers. In the event, a number of symbols on the reel-set are removed by a smoke bomb and replaced by new symbols.

The free spins bonus feature on the 777 Heist slots is triggered with the clearing of the reel-set of all the symbols. This is possible by getting consecutive wins from the same spin, and this is where the reel-modifiers can help towards that goal too.

The slots experts at Red Rake Gaming are looking forward to releasing this game as a free play demo slot at online casinos that host demo slots. This would enable all interested players to try the game before playing with real money.

We have a rather entertaining video slot that takes the gameplay out of the box in a way. The reel modifiers bring a welcome boost to the chances for getting a win and the free spins bonus is always anticipated, all towards a maximum potential payout of 5000x from the same spin.

Discover the 777 Heist slots by claiming a welcome offer right from this page and play at top rated online casinos.