Go back to ancient Mesopotamia to explore the Age of Akkadia slot, which comes with three bonus features. In the Free Spins feature, a hidden multiplier comes into play, which is known as the HIdden Multiplier feature. Apart from these, there are the Cascading Wins and Akkaida Wild features. There, if we count again, there we have four bonus features. Continue reading our Age of Akkadia slot review to find out more. 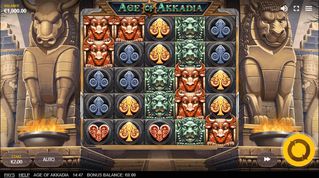 Providers often turn to ancient civilizations to find inspiration for a slot theme. This time we have the Akkadian Empire, where we don’t find buildings as impressive as the Pyramids of Giza for instance. Still, there are other pretty interesting landmarks of this first ancient empire of Mesopotamia. The Sargonid dynasty, for instance, is known for the reconstruction of Sumerian temples, palaces with practical amenities, as well as fortresses.

About Age of Akkadia Slot

Age of Akkadia slot is a game produced by Red Tiger Gaming, a name often recognized for its top-quality. Based on the stories about the ancient civilizations of Mesopotamia, precisely the Akkadian Empire, this slot comes with no fixed paylines, but winnings based on the Clyster Pays system.

This game has a Hidden Multiplier feature that may appear during the Free Spins. These are two of the four bonus features. Your winnings can reach a maximum of up to 2048x your stake. Age of Akkadia slot is played on a 5x5 grid.

Age of Akkadia slot, an ancient Mesopotamian, historic-themed game, has a rich design filled with elements matching the theme, and landmarks of the Mesopotamian culture. Reels set is a palace with two animal statues on both sides. Light nuances prevail even when the colours seem darker. The reels, filled with symbols, also match the whole Mesopotamian story. 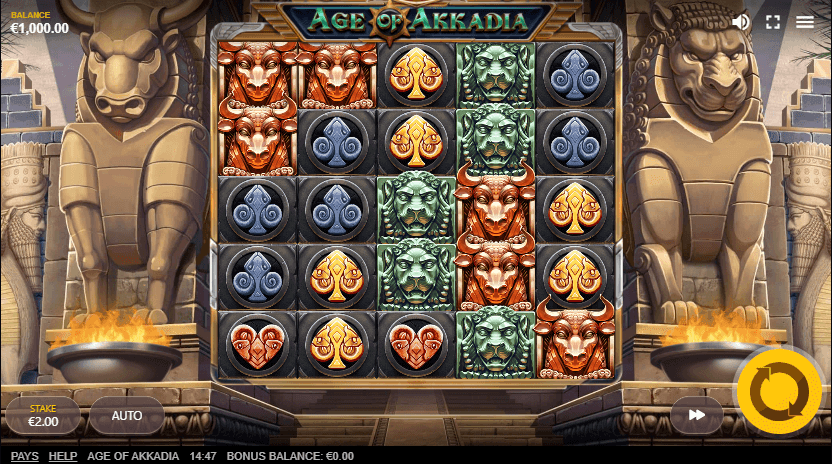 Animations start with fire on both sides near the animal statues. The symbols are completely removed off the grid before being filled again. Winning symbols turn into coins when you can hear similar sounds. Ending with music that is rather unusual, this slot is very unique in terms of graphics, animation, and soundtrack.

On the paytable, there are eight symbols, separated into high-paying and low-paying ones. Low paying symbols are clubs, diamonds, hearts, and spades, while high-paying are birds, lions, bulls, and Sargon. Three of the high-paying symbols are worth 0.3x - 0.5x your bet for three of a kind and 3x-5x the bet for five in a combination. The wild replaces all standard symbols in a winning combination and pays 1x, 2x, or 10x your stake for 3, 4, or 5 combined on a payline.

RTP, Variance, and Payouts for Age of Akkadia Slot

The Age of Akkadia RTP is a bit under the industry standard of 96.0%, being 95.67%. This is a medium volatile slot, which means winnings can be more frequent but not extremely large if they happen. TO better understand slots variance, volatility, and RTP read our full guide.

Gameplay and Features on Age of Akkadia Slot

The bonus features, Free Spins, the Hidden Multiplier, along with Akkadian Wild and Cascading Wins, play an important role in possibly reaching the potential winnings of up to 2048x your stake. So let’s see what each of them brings into play.

This feature we already announced previously. If you land a winning combination with high-paying symbols that come in the middle turns into a wild for the cascade that follows. An exception to this feature is a cascade made up only of wilds.

Before you start spinning, on the bottom three rows you can see the word BONUS. You can trigger the Free Spins feature once you create cascades that reveal all letters in the word. Ten free spins can be awarded. This feature can also be retriggered if you reveal the BONUS word during the feature. This time five free spins are awarded.

Free Spins feature is spiced up with Hidden Multipliers, that you can land on each spin. They can appear up to three when the value is combined to boost your payout by up to 10x. If you reveal a multiplier, it adds to a win multiplier during the bonus feature, and it applies to each combination. This rinsing multiplier can be increased up to 30x.

Age of Akkadia Slot on Mobile

Age of Akkadia slot can be played on mobile devices, and is compatible with various OS. It runs well on Windows, iOs, and Android.

Red Tiger Gaming’s portfolio is full of high-quality games that can bring an excellent gaming experience. Starting since 2014, there are many slot titles worth mentioning, and that is why we do it for three in this section:

Cash Volt - Cash Volt is a classical slot machine-theme slot that comes with five reels, three rows, and 20 paylines. Winning at the game requires at least three matching symbols on a payline. This slot can bring you a maximum potential win of up to 2500x your stake.

Reel Keeper - Reel Keeper takes place on a standard layout of three rows and five reels. It comes with free spins and 10paylines, while the volatility is high. Here you can win up to 6073x your stake.

Aztec Spins - Aztec Spins slot comes from R7 Studio, which is a subsidiary of Red Tiger Gaming. It comes with a Free Spins feature and a multiplier and has 30 paylines. This slot has an RTP of 95.71%, which is very close to the industry average.

Age of Akkadia slot amazed us with the rich design filled with elements related to the theme. On the other hand, there are the Cascading Wins, which sometimes seem more interesting than the fixed paylines. Also, we like the free spins and especially the hidden multiplier. You can try an Age of Akkadia demo in some of the casinos we recommend on Slotswise.

Discover the Age of Akkadia slot by claiming a welcome offer right from this page and play at top-rated online casinos.