Play the Dice Dice Dice slot to get a taste of shooting craps in Las Vegas, with a twist. The game can trigger random multiplier respins that can help towards the maximum exposure of 5497.70x multiplied by the bet. The theoretical return to player is just below the average at 94.96% - find out more in our Dice Dice Dice review. 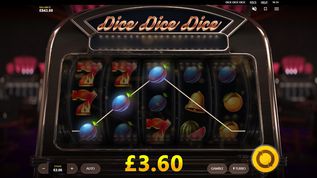 Red Tiger have come up with a retro slot that looks much different than most slots of this kind. The first thing that gets you about the Dice Dice Dice slot is its ancient slots machine look that's pretty sleek and unique. The players are able to play on five reels and three rows that spin across 10 always active paylines.

The wins are made with three or more symbols of the same kind which must appear from the leftmost reel and on to the right. Five symbol wins pay the biggest amounts and there are a number of high-paying symbols that can bring on hefty payouts.

Dice Dice Dice slot has a wild symbol, which is the name-giving dice. There is a reason for that - the dice carries multipliers which can multiply between one another and result in bigger prizes on the payline wins.

The Las Vegas theme in the background of the Dice Dice Dice slot sets the stage for a reel adventure that lacks bonus features, yet it is both dynamic and engaging. The maximum theoretical payout is more than 5497.70x on the winning bet.

Red Tiger have made a solid online slot machine that takes you to Vegas. They've invested time and their best creative moments to create a dynamic reel action that is well-animated and laced with a superb musical score.

The highlight of the game are the respins which deliver a thumping house beat that keeps you on the edge as the Dice Dice Dice slot does its thing to deliver a greater number of multipliers.

Each winning outcome is punctuated by an electrifying display of lights as the symbols throb, all the while the slot machine pumps out gold coins from the bottom.

The game starts with the push of the big round spin button that is located in the bottom right corner of the screen. To the left of it is the Turbo button which can be toggled on to make the reels spin and stop faster.

But, before you make the first spin, make sure if the default amount is the one you want to play with. The Stake window in the bottom left corner is where all of the amounts of the bet per spin can be found.

The smallest bet in Dice Dice Dice slot is £0.10 per spin, while the maximum bet is £150.00. There are multiple other sums between the far ends, where you can find a wager that is more preferable.

The Auto button stands for Autoplay. You can select from the number presets the automatic spins that Dice Dice Dice slot is going to make when you start the round. The More Autoplay Settings button lets you place a number of stops, such as loss limit, which helps look after the balance.

The payouts are made on ten paylines and the number of symbols is seven, plus the dice wild symbol.

The most valuable symbol is the red hot seven, which is a classical Las Vegas slots symbol. For the optimal outcome of five of the same, the Dice Dice Dice slot delivers a payout of 150x multiplied by the winning bet.

Next in terms of value is the diamond. Five diamonds equal a prize of 100x. Follows the golden bell with 70x, the watermelon with 40x, the peach with 25x, plum with 15x and cherries with 10x.

The only bonus symbol is the dice which is wild and substitutes for any other symbol. Unlike your typical wild symbol on any given slot, the dice in Dice Dice Dice slot appears only on the middle reel.

When the wild helps connect a payline win, the symbol rolls in order to turn up a multiplier number. If there is more than one dice on the reel, all present dice roll for the multiplier amount on the win.

The kicker of the game is when a win occurs and triggers at random a series of respins, during which there is an increased chance of landing a lucky dice. Any dice that stop on that reel spin to deliver the win multiplier.

Red Tiger Gaming have opted for a theoretical return to player that is one point below the average. At 94.96%, the RTP isn't going to matter a lot in the expected return following a prolonged period of play. For a game that has a respins feature capable of triggering the better share of big payouts, one point below the 96% mark isn't going to tip the balance an awful lot in the house's favor.

The game is made by Red Tiger who are a well-known provider that releases its online slots for demo play. Besides this avenue of reaching the game, there are also the online casinos that host demo slots for registered players.

Las Vegas is beckoning with this retro slots machine that doesn’t have a free spins bonus feature, yet delivers a terrific respin feature which can show up with a host of wild dice multipliers. Red Tiger Gaming had laid out the theoretical return to player at just below the average, with 94.96%.

Claim a welcome offer and discover the Dice Dice Dice slot at the online casinos on this page.

No, this game doesn't feature free spins. Instead, it has other two bonus features called Lucky Dice and Rolling Respins. Lucky Dice is a Wild symbol and substitutes for all symbols. The Rolling Respins feature randomly activates a couple of respins with an increased chance of landing the wild symbol.

What are the RTP and the variance of Dice Dice Dice slot?

The theoretical Return to Player is just below the average at 94.96%, while the variance is medium to high.

Yes, the Dice Dice Dice slot is available in demo version that can be found on the featured online casino sites. You can try playing this game for free and decide whether you want to continue playing it with real money or not.