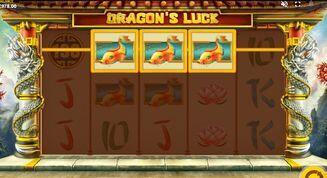 Enter the zen garden to discover the Dragon’s Luck slot. Play for a chance to win the 1380x top paying symbol, plus random pays with the game’s four bonus features.

Underneath a pagoda roof there are the secret scrolls that spell out the path to the Dragon's Luck slot. Between the ornate columns presided by two ivory-white dragons is the reel-set of five reels and three rows. Obviously Dragon's Luck slot draws inspiration from East Asia, its tradition and those symbols that are most commonly associated with this part of the world. Coming from the slots experts at Red Tiger Gaming, this digital slot machine promises an abundant gaming experience that unfolds across ten always-active paylines.

Besides this arrangement of the reels and paylins, there are a number of bonus features that enrich the gameplay and incline the fortunes towards the players, for the occurence of potential winnings. Such feature is the Mega Coin, represented by a golden medallion of a dragon, which results in guaranteed wins. There are three more features that appear and a mighty symbol involving the number 138, plus an added zero for a line win of five matching symbols.

As it can already be seen, there seems to be so much hiding behind that pagoda and the papyrus scrolls on the Gradon's Luck slot. If anyone interested in what happens next, in terms of gameplay details and the welcome bonus that can be claimed, those are free to follow along.

How to Play Dragon’s Luck Slot

Since the game's ten paylines are always active the players just need to figure out the stake per spin. The button titled "Stake" that is located in the bottom left corner contains all of the amounts that will give you an idea about a value to choose from. This isn't a high stakes slot and we could barely call it a penny slot because the basic wager that can be selected is just £0.20 and the most expensive bet is £10.00.

For those who like to let the game do its own thing and turn the reels for a specified number of times, there is the Autospin option, which is located to the right of the Stake button. Besides the number of spins there is the option to set a loss limit. Then there is the Turbo button which will make sense to those anxious players out there who are eager to know the outcome of each spin as fast as possible.

The paytable is another thing that comes in useful to the players. This is accessed from the menu button in the top right corner. This is where the players can discover the symbol pays and information about the bonus features.

The game design is clean-cut and to an extent, it is minimalist. However, there is a lot going on the reels and with the symbols. Each symbol springs to life when part of a winning combination, and those dragons that flank the reels become the conveyors of a fierce fire that lights up the reel-set in order to increase the wins.

As for the symbols, there are the lower-paying category of the high cards that start with the ten and end with the ace. The high-paying order of symbols includes the lotus flower, a golden catfish, an oriental doll and a coin that has the number 138 in it, for the highest paying symbol.

There are two more symbols, which are the specialty symbols. The Dragon Coin is a golden coin medallion which when appearing on the reels, it starts to spin before it reveals the hidden symbol. The Dragon’s Luck slots Mega Coin is a symbol itself, and takes up four squares on the grid. This coin results in guaranteed winnings.

How to Win Dragon’s Luck Slot

The game's has lots of bonus features, and with it, lots of potentials for landing small, medium and big wins. Considering it is not a high-stakes game, we could say that the element of risk has been brought many notches below a threshold that spells out a high stakes game.

The most valuable symbol in Gradon's Luck slot is the 138 coin, because it pays 1380x on the winning bet and there are other symbols that pay decent amounts, such as the doll, delivering 400x and the catfish with 300x.

Then when the dragons come to life, they will breathe a breath of fire and cause some of the symbols to heat up and elevate their value. The dragon coin occurs at random and in clusters of many coins, which spin and reveal the same symbol which becomes part of a payout.

If you are eager to discover the dragon’s luck, start by claiming one of the welcome bonuses that takes you to a top-level casino, right from this page.