Lord Of The Wilds Slot

The game makes a bold statement by offering no less than 30 paylines which work against four rows and five reels. Players will find a wild symbol that can become quite diligent during the free spins bonus and this and other features can be experienced by playing bets of as little as 10p per spin. The theoretical return to player of Lord of the Wilds RTP is 95.66% and but the variance is medium. 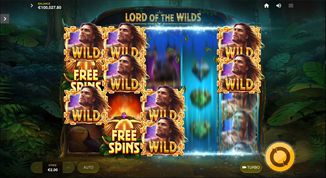 Lord Of The Wilds Slot Online

It isn't such a big deal if you haven't read Lord of the Flies, but if you are a slot player and you haven't checked out the Lord of the Wilds slot you need to consider revising that oversight. The game comes from Red Tiger Gaming and has a NetEnt look and feel to it, which makes sense now because the two companies have become partners. Nevertheless, this jungle-themed adventure justifies its title to the fullest and it is interesting for the players to see how.

Lord of the Wilds Introduction

Players will find a game that repeats the common tropes of slots that are set in the jungle. This game, however, makes two nods - one to the famous book that we annotated above and the other is to Tarzan, as the fictional character represents the wild symbol. In terms of features, the game can trigger free spins, switch symbols towards making better winning outcomes, cast wilds on the reel set and make them sticky. All this is just enough for an exciting reel adventure.

Lord of the Wilds Design Features

In terms of graphic design we have a stellar production coming from the slots experts at Red Tiger Gaming. The NetEnt influence can be felt clearly on the reels as the game has a number of animated symbols and a drawing style that hints in that direction.

The spinning of the reels is liquid and the layout of 4x5 has been tucked in the center of the background so as not to capture the entire screen, as it is usually the case. Clever attention to detail there.

Lord of the Wilds slots is all about the wild symbol. It is the most anticipated one on the reels. The character that mimics Tarzan is animated on the reel set and outside it, as the man can be seen swinging in and out of the picture on a lianna. Winning outcomes are announced in a lively way, especially big wins.

How to Play Lord of the Wilds Slot

Players can start rolling on the reels of this jungle and try and catch some diamonds or catch a glimpse of three or more wild beast symbols for a winning outcome. Before you make the first spin it may be smart to check out the bet amount, which is shown in the bottom-left corner of the screen, as your casino's default bet may be greater than the amount with which you wanted to play.

The arrangement of the buttons and controls is typical for all Red Tiger Gaming slots. The spin button is in the bottom-right corner of the screen and the fast-forward marked turbo button is to the left of it. In the upper-right corner holds four buttons: menu button leads to the paytable, the speaker button turns on or off the sound, the square button enables full-screen mode and the house button takes the players to the casino lobby.

Players can play Lord of the Wilds slot in its autoplay mode by selecting the button Auto, in the bottom-left corner. The menu enables players to choose from the automatic spins presets and add the mandatory balance loss limit by selecting an amount from the list. There are few additional options when you open up the Advanced shelf.

How to Win Lord of the Wilds Slots

The 30 paylines can host payouts that consist of three, four and five symbols, however, the possibility of multiple payline wins exists because the wild symbol can appear in ubiquitous numbers.

Lord of the Wilds Bonus Features

The game's rhythm rides on what the wild symbol does and how the random number generator favors it. Jane's symbol can sub as a reel modifier because it can turn the the regular Tarzan symbol into the Tarzan wild, but not only that. The converted wilds become sticky for the next spin. It is common knowledge that Tarzan has a thing for Jane, and the other way around, so expect to see more conversions from regular into wild symbols.

Tarzan's Treasure is another random event which can add multiple wild symbols on the reel set. This and the wild conversion feature can trigger during the free spins bonus, which is triggered by three golden elephant symbols. The player gets ten spins for three scatters and additional five spins for each extra scatter.

Lord of the Wilds Free Play

Players can try the features and gameplay for free by playing the free play demo slot at online casinos that host slots in practice play mode.

Lord of the Wilds Closing Thoughts

This is a fun to play game with two reel modifiers that are all about the wilds. Even though the wild is the most anticipated symbol, and one which pays, the Lord of the Wilds RTP is quite solid at 95.66%, just slightly lower than the average of 96.00%. Overall, the players will find this to be an engaging game that comes with a big-win potential.

Discover the Lord of the Wilds slots by claiming a welcome offer right from this page and play at top rated online casinos.

Tarzan and the Jewels of Opar