An exceptional slot game by Red Tiger Gaming on eight reels and six rows which takes bets from 0.20 to 40.00 and has two high symbol payouts of 1500x, as well as several high-paying amounts on the line bet. The game has three features of which one is a free spins bonus triggered by three or more scatters. The phoenix wild can multiply itself on the reels and lead to the possible eight symbols that pay 1500x. The game has a theoretical RTP of 96.22% 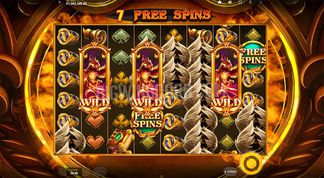 Are you ready for some phoenix fire action and winnings of up to 1500x? Discover the Phoenix Fire: Power Reels slots.

A brand new slot game emerges from the laboratory of Red Tiger Gaming and it will take the gaming enthusiasts by storm.

The title is Phoenix Fire: Power Reels, and it is a continuation of the Phoenix Fire slot. This time around, the game gets eight reels and six rows - plenty of reel action there and all primed for once-off winnings of up to 1500x, which can occur more than once in the game, for the luckiest players out there.

Phoenix Fire: Power Reels slot comes with a set of features which include expanding phoenix symbols, stacked wilds on more than a few rows, free spins bonus, the phoenix wildfire feature, and lots of exciting symbol prizes that can be awarded for matching outcomes between three and eight symbols on a payline.

One look at the nitty gritty details about this release and it becomes immediately factual that anyone can play the game, thanks to the wide range of bets the game can take.

As we said , the game features eight reels and six rows which spin across 30 always active paylines. The bets that the players can choose from are between one penny per line and up to £0.75. As any given slot game, it will start with a default bet per spin so unless you want to spend that right from the get go, then look in the bottom left corner of the page to change the amount.

The start bet is 0.20 per spin and the ultimate sum is £40.00, with many options in-between these two ends from which the players can choose. To send the reels spinning use the big round yellow button and to make then turn and stop sooner than later, use the Turbo button to the left of it.

On the opposite side of the surface of Phoenix Fire: Power Reels slots is the Auto button, which stands for 'autospins'. Selecting it will open up a board with several controls that set the game in automatic spins mode, which allows the player to kick back and relax. The additional options are for setting a win limit or a loss limit, as well as a stop on bonus feature button.

The paytable is also there to open up a view into the symbol pays and to provide detailed information about how each bonus feature is triggered and what it does. The paylines arrangement is there as well, however, viewing this information is the least necessary as all of the outcomes in the game are automated and displayed on the corresponding windows.

View the symbol pays in the paytable and access it in the upper right corner of the screen. This is where it becomes apparent that the most valuable symbol of the Phoenix Fire: Power Reels slot is the phoenix itself, which is the game's wild. It pays 1500x on the line bet when it occurs in eight matching symbols, and substitutes for all symbols.

That symbol is followed by the goblet, which also pays 1500x on the line bet and 750x for seven matching symbols on a line. Unlike the phoenix wild, this symbol pays for anything between three and eight instances, whereas that symbol pays only when it falls on eight. Furthermore, the book of magic pays 900x and the golden cylinder brings 750x, followed by the scroll of 600x.

The rest of the symbols are the cards suits, which pay the same amounts for three and for eight instances, that is 9x and 240x, with prizes in-between these two as well.

The free spins bonus is the one that is most anticipated in this game. It is triggered with the symbol that states Free Spins on it, and needs to occur in three or more instances anywhere on the reels. This bonus feature comes with the possibility of a random occurrence of the phoenix in up to three positions on the reels in a single spin.

Another feature that is highly welcome on the reels is Phoenix Wildfire. This is a random event that turns each adjacent winged symbols into wilds. The result of this can be each winged symbol becoming a wild towards the possibility of eight on a payline, which brings one of the two 1500x symbol payouts.

The theoretical return to player outcome for this slot has been clocked at 96.22% and that is pretty standard for a game of this reel-set arrangement. It is also above the average of 95.00%.

The game has been optimized to fit on your mobile screen, for the pleasure of mobile online casino gaming. Even though the slot has eight reels and six rows, which is wider than the usual slot game, it will fit on your android or apple device.

There are excellent bonus features and symbol pays on the line bet. This is a high-variance game with a moderate hit rate, which means, the bonus features are the key to the potential big win. If either strikes, especially the phoenix wilds replicating themselves, could lead to substantial wins, in relation to the triggering bet.

Embark on your Phoenix Fire: Power Reels adventure at one of the online casinos on this page. Claim a welcome offer to play today.