With Tiki Infinity Reels Megaways, ReelPlay comes with an exceptional slot. This game features a combination of two powerful slot engines - Infinity Reels and Megaways. It’s a well-designed slot with Symbol Multiplier and Free Spins features, as well as a jackpot of an 888x stake prize. What’s more, the maximum you can win in the base game is 10,000x your stake per spin. There’s a lot going on in this hybrid of a slot where the number of reels and paylines is dynamic and can change with every spin. So, keep reading our Tiki Infinity Reels Megaways Slot Review and learn more about this extraordinary game! 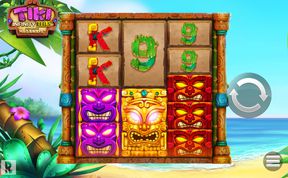 The Tiki Infinity Reels Megaways slot is the second game from ReelPlay to feature both Infinity Reels and Megaways mechanics. Set on a beach in the South Pacific, the reels of this slot increase with every win. At the same time, a symbol multiplier is applied to all wins. You can also win a jackpot of 888x stake here. And that’s not it - there is a Free Spins feature where the multiplier can rise without limits. We got your attention, right? Now, read our full Tiki Infinity Reels Megaways Slot Review and make sure to learn everything about this dynamic game so you’ll be ready to get the most out of it the next time you play it.

The popular developer ReelPlay has come up with its second game where it combines both Infinity Reels and Megaways mechanics - the Tiki Infinity Reels Megaways slot. With the help of the Infinity Reels mechanic, the number of this game’s reels increases with every win. On the other hand, the Megaways engine allows the game to have a different number of ways to win with every spin. For more details, read our Megaways Overview where we explain how this engine works. Overall, the opportunity to have endless reels results in having a huge number of paylines, which makes the game very attractive among the players.

The Tiki Infinity Reels Megaways slot has a Polynesian theme and its reels are placed on a beach. To start your gaming adventure, you should place your desired bet per spin, which ranges from £0.30 to £90, so you have more than enough options to set your preferred bet. The game starts with three reels, each containing between three and five symbols. You need to land at least three matching symbols on a payline from the leftmost reel in order to win, except for the volcano symbol for which you need two on a line to win. The more symbols you have per reel, the more Megaways you play with.

ReelPlay has packed the Tiki Infinity Reels Megaways slot with the potential to reward maximum payouts of up to 10,000x your stake per spin. Moreover, there is a jackpot that rewards an 888x stake prize when triggered. In terms of the features, this game comes with a couple of interesting bonus features, including Symbol Multiplier and Free Spins.

As we’ve mentioned above in our Tiki Infinity Reels Megaways Slot Review, this game has a Polynesian theme and explores the Tiki Jungle, one that is used in many popular online slots. This time, the Tiki Infinity Reels Megaways slot is set on an idyllic beach in the South Pacific and you can see a clear blue sky, palm trees and the sandy beach in the background. In the middle of the screen, a volcano can erupt at any moment and the gameplay becomes more fast-paced. Overall, the theme is all about relaxing on a tropical island beach, and we must admit that the design and graphics are top-notch. And on top of that, the soundtrack is chosen to perfectly fit the theme and tropical vibes.

In terms of the paytable, the game consists of low-paying symbols which are the 9, 10, J, Q, K, and A royals. Next are the higher-paying symbols, designed as Tiki totems in different colours - green, blue, red, and purple. They also have show emotions, so one is smiling, another is angry, and so on. Furthermore, the golden Tiki mask is the wild symbol which acts as a substitute for all regular symbols, helping you to form a win. There is also a volcano symbol which is the game’s scatter, used for triggering the bonus features.

The game’s RTP (Return to Player) percentage is the industry average, being at 96.07% and we are pleased with it, given the number of features and mechanics used. The variance is medium to high, where you can eventually succeed in winning huge prizes available from the increasing multipliers. As we’ve mentioned above, the game’s maximum win is set at 10,000x your stake per spin. So, if you’re playing with the maximum bet per spin possible, you can win up to £900.000, which is impressive. Here you can read more about the Variance, Volatility and RTP in online slots.

ReelPlay has made an incredible online slot that features the Infinity Reels mechanic, which is becoming very popular among the players. What’s more, the fact that the game also features the Megaways mechanic creates an excellent combination. We haven’t seen many slots to combine two of the most powerful mechanics before. When playing the Tiki Infinity Reels Megaways slot, you can benefit from a couple of bonus features that we’ll tell you below. And to make the game more interesting, a wild symbol has been added to the reels. It helps you form more winning combinations by replacing the regular symbols.

When you start playing the Tiki Infinity Reels Megaways slot, you start with 3 reels. When you land a win, an extra reel will be added and then the reels will spin again. This is the Infinity Reels mechanic where the best thing is that there’s no limit to how many reels can be added. As long as you keep landing wins, the number of reels will increase. On the other hand, the game features the Megaways mechanic, which allows each reel to have between 2 to 5 symbols. This results in a different number of paylines on every spin. Since there’s no limit to the number of reels you have, there’s also no limit to how many paylines you can get. You can always see the current number of paylines that you’re playing with at the top of the reels.

Every time you land a win, the Infinity Reels mechanic will give you an extra reel. When this happens, the Symbol Multiplier feature will be triggered. The multiplier starts with the value of 1x at the beginning of a new spin and will increase by 1 for each new reel added. Just like there’s no limit to the number of reels you can have, there’s also no limit to how high the Symbol Multiplier can be.

When you land a win with the Volcano symbol, you will trigger the game’s Free Spins feature. You will be then rewarded with 10 free spins and the setting will change to a night where the moon shines down onto the sea. Also, the Symbol Multiplier is active during this round, and it won’t reset so it can only get higher. During the Free Spins, an extra Free Spin is awarded when you get 2 extra reels. Also, if you land another win with the Volcano symbol, you’ll get 4 extra Free Spins.

On top of the high-class design and graphics, the Tiki Infinity Reels Megaways slot is developed with HTML5 which ensures that you’ll receive the top-notch gaming experience from all devices, including mobile. You can easily access the game on any Android, iOS and Windows device where it will perfectly adjust to your screen.

Is there a Jackpot on Tiki Infinity Reels Megaways Slot?

Yes, the Tiki Infinity Reels Megaways slot comes with a feature called the Jackpot Feature. When you have 12 or more reels, the Jackpot Feature is triggered. Then, you’ll receive a jackpot of 888x your stake. There is also a progressive multiplier in play, which means that it’ll boost your total winnings. As the reels grow, you will notice a little box in the top right corner that will tell you how many more reels you need in order to hit the Jackpot.

ReelPlay is a well-known developer that makes quality and innovative slots. It has previously used the Infinity Reels mechanic in other slots, such as the El Dorado Infinity Reels slot. The game is based on the legend of El Dorado (the Golden King) who covered himself in gold dust before submerging himself in the Lake Guatavita. With Infinity Reels, you have an unlimited number of reels you can land with every winning spin. Moreover, another popular ReelPlay slot is the Atlantis Megaways slot that the developer created together with Yggdrasil. It’s a game dedicated to the lost city of Atlantis where you have up to 117,649 ways to win. What’s more, this game is packed with four fixed jackpots that can lead to wins of up to 8,640x your stake.

The Tiki Infinity Reels Megaways is an innovative slot that features two of the most powerful mechanics. The Infinity Reels and the Megaways allow you to have an unlimited number of reels and paylines, so there are plenty of opportunities for you to land great prizes. The game has great potential and decent bonus features, including free spins, as well as a jackpot that will give you a prize of 888x your stake. So, if you’re interested in playing some new slot with unique features and a wonderful design, we recommend you to try the Tiki Infinity Reels Megaways slot.

Discover the Tiki Infinity Reels Megaways slot by claiming a welcome offer right from this page and play at top-rated online casinos.