This edition of the Beat the Beast slot series has a couple of extra features but not too many, which is following in the vein of the previous releases, such as Beat the Beast: Mighty Sphinx and Kraken's Lair slot. One of the features that can contribute towards to the big win potential are the stacked wilds, however, there is another wild that is tied to the free spins bonus feature. 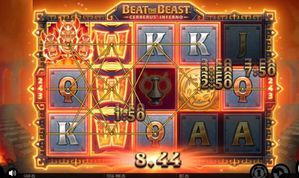 Thunderkick are continuing their Beat the Beast slots series by adding another title about a fierce mythological creature. This time around, it is the hell-hound Cerberus. For those that have never come across the myth of Hades, the keeper of the netherworld, he had a three-headed dog that barked their mouths off at those who dared leave.

Non surprisingly, Beat the Beast: Cerberus Inferno slot allows the luckiest players out there to win as much as 6666x multiplied by the winning bet. The payouts are made possible on a standard reel-set of three rows and five reels that can trigger wins on the 243 ways to win mechanics in the free spins bonus and nine paylines in the base game.

Since the said series has been well-received by the players so far, we shall see how the Cerberus Inferno fares, but by all means, there is more to the game than what's at face value.

The 3x5 reel-set is enclosed inside a wrought steel frame and surrounded by curving stairways that are a bridge that takes the wayward adventurer across the river of lava below. The orange-purple glow of the fire is cast across the entire background, giving Beat the Beast Cerberus Inferno slots the ominous appearance that it's meant to provide.

A paytable of high and low paying symbols contains the high cards that range from ten to ace, while the picture symbols depict warrior helmets, weapons and few artifacts of the Cerberus: golden statue, medallion and the three-headed beast itself appearing as the scatter/wild symbol.

The gameplay is marked by few visual effects that bring out the heavy-metal look and feel of this reel adventure. A fitting soundtrack is there to further enrich the gaming experience.

How to Play Beat the Beast Cerberus Inferno Slot

Thunderkick, the company that has what is probably the coolest names in the world of online slots producers, has also a memorable layout regarding the controls and settings on their slots.

The three buttons in the bottom right corner of the screen are directly involved in the gameplay. The poker chip is where the players can choose the bets, the smaller circle that has the play button is for the automatic play option and the bigger of the three is the spin button that makes one turn on the reels for one time the selected bet.

Beat the Beast: Cerberus Inferno slot has a wide range of bets that begins with 10p, so that most players can take on the game in a low-stakes adventure. The maximum bet is £100.00 which is preceded by multiple bet amounts. Once you've selected your bet, you can either press spin or play the autoplay option with the active bet.

Autoplay lets you relax and let the game do the spins without your having to make any manual inputs. There are additional options that let you set conditions, which can make the game stop autoplay when either of these has been met, such as 'stop on a bonus feature trigger'. To start the game, simply choose one of the automatic spins presets and press play.

The game shows the balance amount in the bottom left corner of the screen and the active bet amount is to the right of the center. The menu button, which is a nine-dot symbol, leads to the game's paytable, rules and few other pieces of information.

How to Win Beat the Beast Cerberus Inferno Slots

By delivering payouts in a standard manner, on a payline or on the 243 ways to win during the free spins bonus, the game has no room for cascading wins and multiple reel-modifiers, which reflects positively in another way: the symbol payouts aren't disgustingly low. In fact, Beat the Beast Cerberus Inferno slot can make payouts that are quite decent.

Most valuable symbol is the one of the three-headed dog. Five of the same on a payline, or conversely, on adjacent reels, pays the game's top prize of 150x multiplied by the winning bet.

The game packs no one but two wild symbols, which we are going to take on in the section below, because they are tied to some of the extra features.

The standard wild symbol, which is a lava-doused rendition of the W letter is the standard wild. This symbol occurs stacked across one or more reels to substitute for any other symbol, except the other wild, which is also a scatter.

This symbol is the golden medallion that has the Cerberus' heads on it in. This symbol substitutes for all the rest, but it also triggers the free spins bonus and pays a sweet amount.

Three, four or five of these pay the respective amounts of 2x, 20x and 200x multiplied by the winning bet, in addition to triggering 10 free spins.

As we mentioned earlier, the nine paylines turn into 243 ways to win, which is a welcome shift in the payout mechanic. The free spins can retrigger with another set of three or more scatter/wilds.

The game is offered as a free play demo slot at online casinos that have this functionality. It allows players to try the game for free, although those who are familiar with the series already know the game's soul.

That maximum potential payout of 6666x, we wouldn’t worry about that number, it’s just numbers, and besides, that other number lacks a six. Besides this tiny detail, this is a mighty game to consider and an excellent addition to the Beat the Beast series.

Discover the Beat the Beast: Cerberus Inferno slots by claiming a welcome offer right from this page and play at top rated online casinos.

Age of the Gods Norse: Ways of Thunder