Sunny Shore slot is a relaxing beach-themed game with five reels and 27 paylines, developed by Yggdrasil Gaming. The game can be played with a minimum wager of 10p and it is available at a number of online casinos. 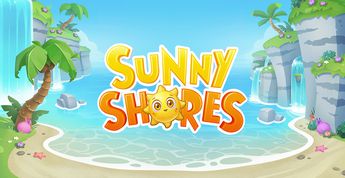 Sunny Shores slot is a light-hearted game with a summer theme, produced by Yggdrasil Gaming. This game features slightly retro fruity symbols, but the design itself is rather modern. The layout of the reels is square-shaped five by five and there are 27 ways to win. The maximum main game win is 300 coins.

If you like a game that will take your mind off everyday problems, then, by all means, go for Sunny Shores slot, a game where you’ll see playful fruit symbols against a backdrop that depicts a tropical paradise, including a beach and lovely waterfalls.

The music is no less soothing, it’ll make you forget everything for a moment and feel like you’re lying on a tropical beach. The game features 27 paylines and what’s best is that a winning combination can form both left to right and right to left.

Otherwise the game features all the standard options that are included in other Yggdrasil games, so if you’re familiar with their work, you’ll have no problems adjusting to Sunny Shores slot. The game was released towards the end of May in 2017.

How to Play Sunny Shores Slot

Even though Sunny Shores slot features 27 paylines, the game is still paid with 25 coins. You can’t alter the number of coins, but you’re free to select the coin value which determines the overall stake amount. The minimum coin value is less than a penny, which is someone unusual. The minimum stake thus is 10p, whereas the maximum amount that you can wager per spin is limited to £125, or £5 per coin.

Much like other Yggdrasil games, Sunny Shores slot also features a ‘Max Bet’ button and an ‘Autoplay’ button. If you click on Autoplay, the available options will show up and you can set the reels to spin from ten up to 100 times, there’s no infinity option here.

If you open the advanced options screen, you will be able to adjust the spin speed, to turn the sound effects on or off, and to enable using the space button to play so that you won’t need a to use your mouse. There are also options regarding autoplay mode, you can set it to stop after a win of a certain amount specified by you, or to stop after a bonus feature has been activated. Basically, all advanced option features that are available on other Yggdrasul games are also offered. Sunny Shores slot is a mobile-friendly game and it supports multiple browsers.

How to Win Sunny Shores Slot

If you have ever played retro fruities, you will find the Sunny Shores slot symbols familiar. There’s appear, a watermelon, grapes, bananas, a strawberry, an orange and an open shell with a pearl inside. You will need at least three symbols across a payline, and both left to right and right to left combinations activate payouts. For three pears you will receive six coins, but for a combination of three pearls you will get a 25-coin payout, which means that the actual amount won will match your overall stake.

With four symbols the winning payouts are significantly higher. If you manage to hit a payline with four pearls symbols you will receive 60 coins, an amount more than double your stake. The highest main game win is 300 coins and it can be won if one payline features only pearl symbols.

If you wager the maximum amount of money, £125 and you hit the highest winning combination, you will be awarded £1,500 and that is the highest standard cash win. However, if you manage to activate the bonus feature you can win a lot more, especially considering since it includes re-spins.

In addition to the standard game symbols, there’s also a sun wild symbol which can substitute all other symbols and it also triggers the bonus feature. If you see the sun symbol appearing on the reels, you can be certain that the current Sunny Shores slot spin will be a success and that you could potentially win a hefty amount of cash.

Whenever the sunny wild appears it then starts expanding in up to four different directions, up, down, left and right. If the sun appears in the central position, additional 8 wild symbols can appear. If the sunny wild appears on the edge of the reels, additional sunny wilds will appear on the opposite side. As the wild can be a substitute for any other symbol, when it appears in multiple positions the chances of activating more than one winning combination are significantly increased.

After the expanding sunny wilds appear on the reels and generate a win, then the Re-spin feature will be triggered. During the Re-spin game the sunny wilds will remain on the reels. So, if a new winning combination is formed, the reels will keep on spinning with the wilds still in position. The reels will keep on spinning after every subsequent win, so this feature offers a lot of opportunities.

Sunny Shores slot is a low to medium variance game, which means that you can’t expect very high winning amounts, but you will win more frequently. That bodes well with the laidback gameplay. This game has a carefree feel about it and you are guaranteed to relax with it. There is no suspense, no pressure, only beaches, cheeky fruity symbols, cool background music and ambience sounds.

The game RTP is 96.20% which is quite solid and gives you decent winning chances. So, if you like something more refreshing and less stressful, you can try your chances on Sunny Shores slot at any of the online casinos featured here and who knows, maybe the sun will rise on you.