Habanero Gaming are scheduled to release one of the wildest slots this year. We haven't seen this theme for a slot game, yet, so we were definitely intrigued to find out what's going on.

The reel set is standard for the new generation of online slots - three rows and five reels and a top payout of an amazing £37,500. All the reel action involving these mammoth rigs occurs across 15 always active paylines.

The game's symbols consist of those sixteen-wheelers - the trucks that make the world round, bringing us everything from the port to the store. So we see where Habanero got their inspiration from.

The game does pack a bonus feature and that is all about the free spins, but what's amazing is that this feature isn't triggered by a bonus/scatter symbol. What triggers it are the trucks - three of the same color appearing on the odd-number reels, to the effect of as many as 25 free spins.

Yet another amazing piece of information about the Wild Trucks slot is the game’s return to player outcome which spells a RTP of 98.00%

Booming Gaming have some quite decent releases and Pirate Booty is one of those. A ship is the backdrop and the reel-set a rolodex containing pirates and pirate's hooks and barrels of rum - all of which spin on three rows and five reels.

There are 20 always active paylines and bets that range from £0.20 and then some sums that are quite steep, which end with the top wager of £400.00.

The game has a wonderful musical theme, which shows that the developers have invested time and energy into developing this slot, which means, playing it ought to be a fun and entertaining experience. That comes even more so to the fore considering the bonus features.

Pirate Booty slot has wild reels that are full stacks of the wild symbol, a scatter which grants a free spins bonus, a 7x multiplier on the bet with the Cornered Pirates feature and Wild Multipliers that can deliver figures up to x5 on the win.

The symbol pays are quite amazing too, all towards a fulfilling time on this reel pirate experience dropping in June, 2019.

Another game of the Merlin's Magic series. Merlin's Millions started a theme that enchanted so many online casino players, and the roll continued with Merlin's Magic Respins and Merlin's Money Burst.

Now we have the latest edition of this game, playing on three rows and five reels that spin across 20 always-active paylines. The game has all of the magical implements that may be found in a magician's ivory tower.

The most valuable of these implements, ahem, symbols are Merlin's portrait, the trusty owl, and the grimoire that has wispy green fumes above it. These pay 500, 250 and 200 respectively, multiplied by the line bet.

Merlin's Magic Mirror slot has a wild and a 10 free spins bonus awarded with three scatters. It is the Magic Mirror Free Spins, however, that have the potential to bring the neat winnings. Whenever a scatter symbol comes in view,- it becomes a sticky Magic Mirror which turns up either a matching symbol of those on the reel-set or a cash prize.

The game becomes available this June but it will certainly remain a hot pick for the distinguishing slots player for the entirety of 2019, and perhaps longer. 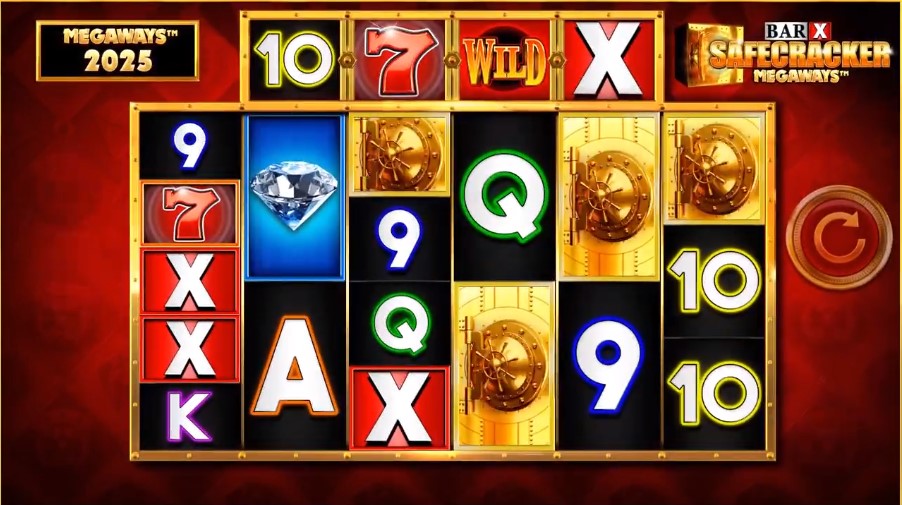 Blueprint Gaming seem to take up all of the ideas that are 'seriouse'. Dropping at the end of June/early July is the Bar X Safecracker slot which belongs to the banking-themed Bar X series.

The Megaways bit certain adds to the anticipation of the game dropping. From what we know this isn't a high-stakes slot, with the maximum wager set at £20.00 towards a top prize of 10,000x.

The intriguing part is in the 117,649 ways to pay and the consecutive reels method of paying combinations that can work with symbols forming clusters as well.

The topmost row of four reels works just like on the famed Megaways Bonanza slot, providing symbols that can become part of the winning combination. The game does have a bonus feature that rewards with multipliers and free spins.

A second-screen pick-me bonus game determines the number of free spins by selecting one of the golden vaults. The most valuable symbols are the red seven, the diamond and the golden vault door, which are the only picture symbols, the rest being the high cards - much alike in the previous Bar X slot games.

Claim a welcome offer to the casinos on this page and discover these and other new releases. Claim a bonus right from this page.