The layout of this game is four rows and five reels that are in line with the Dual Spin mechanism, which plays across 2024 ways to win. Winning outcomes can form with three or more symbols of the same kind and the smallest bet is 10p per spin. 2 Gods: Zeus vs Thor has a theoretical return to player of 96.50% and high variance. Players can land winning outcomes of up to 15,360x multiplied by the bet. 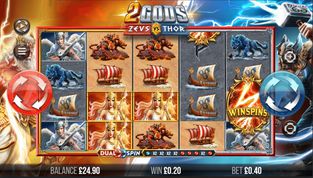 Yggdrasil Gaming have tapped their Viking roots for inspiration in the making of a game that pits one major god against another. This is a story of Zeus versus Thor which takes place on a reel set that is filled with symbols that represent the two cultures from which these archetypal deities had emerged. 2 Gods: Zeus vs Thor slot is as engaging as it looks and players will definitely enjoy the Dual Spin feature which we shall describe in a bit.

The slots experts at Yggdrasil have made a wonderful game that comes with a set of extra features. Players can take any winnings from the base game and take them to the gambling table for a chance to make double on each good guess. The scatter symbols trigger a free spins bonus and there are win multipliers that can boost your winning outcomes. Last but not least, a wild symbol can help make better wins even when there is little going on the paytable.

In terms of graphic design, the game is nothing short of stellar, but one has to see it in relation to the reel set and the Dual Spin mechanism. The reels shift in a very interesting way, causing each spin to be dynamic and filled with suspense. Some of the game's symbols can extend which also makes them appear partial on the reels, however, this registers a winning outcome nevertheless. 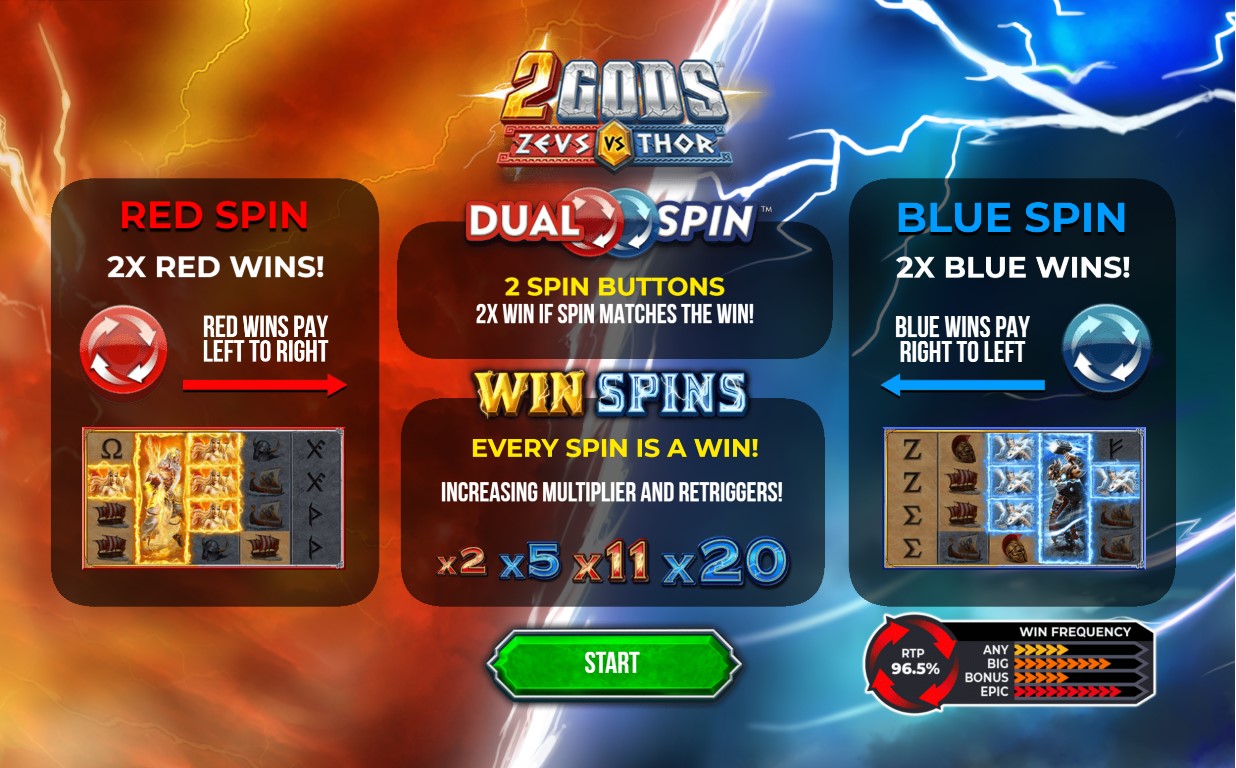 2 Gods: Zeus vs Thor slots is naturally split in two, as the two forces battle through their command of fire and electricity. The reel set is always alight in one of these elements, especially when there is a winning outcome. The sound design is also at a very high level as it's been specially commissioned for this game.

How to Play 2 Gods: Zeus vs Thor Slot

Seeing the game play is exciting but playing it is nothing but amazing. 4the Player has created a unique approach in how the game is played, which requires finding your way around the controls.

Not surprisingly, there are two spin buttons, which reflect the Dual Spin nature of the game. The red button spins for a chance to ring up winning outcomes from left to right and the blue button rings up winnings from right to left.

Players who decide to play in the autoplay mode will find several options regarding the spins. To pull up the menu press the bottom circle of the two that can be seen in the upper-left corner. Next, choose whether to have the autoplay mode make only red spins or blue spins, or choose for these to alternate one after the other.

Two other options are available: Spin changes to last win color or Spin changes to opposite of last win. Next, choose the number automatic spins and add the optional loss or single win limits and press the green Start button.

Already, just setting up for the autoplay mode is fun, so 2 Gods: Zeus vs Thor slot is an exciting adventure at the very start.

How to Win 2 Gods: Zeus vs Thor Slots

The game has 2048 ways to win that form winning outcomes according to the adjacent wins system, where the symbols need to start on either the leftmost or rightmost reel and extend in the opposite direction.

Each side can generate 1024 ways to win and it takes at least three symbols of the same kind to make for a win. There are few exceptions to the latter rule, the wild symbols, the valkyries and the infernal dogs, which can make a payout with two matching symbols.

The wilds are the most valuable symbols in 2 Gods: Zeus vs Thor slot, as they can pay 10x multiplied by the bet for five of a kind, 7x for four of a kind, 3x for three of a kind and 0.3x for two of a kind.

The Athenian and Nordic goddess-warrior counterparts pay 7x, 3x, 1.5x and 0.2 for five, four, three and two of the same. The symbols of Cerberus and Fenrir pay 5x, 2x, 1x and 0.2x for the same schedule of symbols on the reels.

The game comes with a free spins bonus that can trigger both on a red spin and on a blue spin. In the former variant, players need to get three red Win Spins symbols or two red and one blue symbol in return for 10 Win Spins. In the blue variant, ten spins are triggered by three blue Win Spin symbols or two blue and one red.

Seven spins are awarded if the player makes a red spin but gets three blue bonus symbols or two blue and one red. The opposite outcome, blue spin with red bonus symbols, also triggers seven Win Spins.

The bonus game can retrigger. The multipliers are triggered when the spin of your color gets a win that matches it, the multiplier increases by one notch.

4The Player has enabled the game as a free play demo slot, which leps players to discover this epic battle for its features and gameplay.

This is another amazing game made by 4The Player, just like the 9000k Yeti slot and zombie apocalypse 1 Left Alive. The dual play innovation is likely to be applauded by slots enthusiasts. It is certain that the slots experts over on our side enjoyed the game thoroughly.

Discover the 2 Gods: Zeus vs Thor slots by claiming a welcome offer right from this page and play at top rated online casinos.