Thor: The Trials Of Asgard Slot

An amazing new production by Green Valley Games that starts with 243 ways to win and expands to 1024 ways. There is a free spins bonus with guaranteed multipliers with each spin, starting with 1x and ending with 10x. Additional free spins can trigger with the Extra Scatter. Additional features are expanded wilds on three reels and high-paying symbols only, all towards a potential payouts of up to 30,000x. 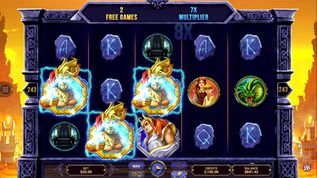 A new story of Asgard is always welcome to add to the online slots theme that took off thanks to the Age of the Gods: Norse King of Asgard slot, but also Asgardian Stones slot. The company behind it are Green Valley Games (GVG) who aren't overly known, but that is mostly because their focus has been on card and table games.

Thor: The Trials of Asgard Introduction

At any rate, they started 2020 with the Thor: The Trials of Asgard slot, which appears quite decently and offers a standard layout of three rows and five reels. These spin to 243 ways to win, which can provide payouts on consecutive reels, regardless of what position on the row they assume. Thor gets help from his gold hammer, which represents the wild symbol and there is a free spins bonus.

It seems that this is about it, but Thor: Trials of Asgard isn't done just yet, because the free spins bonus comes with a kicking extra, where the players are guaranteed increase in the multiplier value, which begins with 1x, but doesn't just end there.  There are other features to consider regarding the game, so  we'll cover them all and give the final verdict about this rendition of the Thor theme at the end.

In terms of the graphics design the developers at Green Valley Games have placed this story of Thor within a stony frame presided over by a viking head, presumably Odin. The background offers a view into a mystical village underneath tall rocks, which sets the mood just right for the entire theme.

Thor: The Trials of Asgard slots is a well-made game, with moving parts and animated symbols. Especially the picture symbols are very well drawn and rendered. Winning outcomes are wrapped inside an electric current that buzzes and crackles, and underneath all this movement is a pretty musical theme.

How to Play Thor: The Trials of Asgard Slot

The developes have made a control panel that is straighforward and at which you needn't deploy your intuition in order to get the game underway.

The Spin button can be seen underneath the third reel. Press it once will have the reels turn per one time the selected wager.

It is best that you make sure the default bet isn't an amount that is too high, before you make the first spin. This figure appears in the window in the bottom left corner.

To select you bet per spin simply press the minus and plus buttons until you arrive at an amount that you wish to play with. The winnings are noted in win Win window.

You can also play the Thor: the Trials of Asgard slot by selecting the Autoplay option. This is the upper button that is to the right of the Spin button. The one bellow causes the reels to turn faster.

Selecting autoplay lets you choose from the available automatic spins presets, and add the optional stops that enable the players to keep an eye on the balance.

If you want to change some settings or view all of the symbol payouts and the bonus feature rules, press the menu button which is on the left side of the reel-set.

How to Win Thor: The Trials of Asgard Slots

When it comes to winning in the game, the basic payouts are made with three matching symbols which must start on the leftmost reel and continue uninterrupted.

A wild symbol, represented by a golden hammer, substitutes all except the scatter symbol. In terms of value, the most valuable is the scatter, as it pays whole amount regardless of where the symbols land.

These outcomes are for five matching symbols

There are online slots in which the bonus feature isn't the best part of the game. This is not one of those games. because Thor: The Trials of Asgard slot has a set of features that can come together to a superb effect for the possible big win.

The scatter symbol triggers 10 free spins when three land on the reels. The spins begin with a multiplier of 1x on the first spin and add +1 for each other spin. The tenth spin concludes with 10x on the outcome per the triggering bet, so every win during the bonus feature ges a multiplier.

A special scatter symbol enter the bonus feature. It is the golden horn with a blue orb behind it, and it only appeas on the fifth reel. When it stops on the reels, the player gets either 3, 4 or 5 extra spins.

The game comes with a number of reel modifiers. First off, the 243 ways to win can expand to 1024. Then there are the Dynamic Wild Reels which can make the three reels in the middle turn up fully stacked wilds.

The Extra Thor Symbols are random spins where the symbols on the reels have a top pay potential, meaning these are high-paying only.

Double Stacks are feature spins which occur on a reel-set that has wild stacks on expanded reels.

The studio behind this game isn’t overly known so it is difficult to say whether they will release their game as a free play demo slot. If they do, it may be found at online casinos that offer demo slots.

We have a feature-tastic set of reel modifiers and extra features which make this rendition of a Thor slot one to consider playing. The maximum potential payout is more than 20,000x on the winning bet.

Discover the Thor: The Trials of Asgard slots by claiming a welcome offer right from this page and play at top rated online casinos.