The Infinity Reels series of slots is getting a new title, which this time is based on Thor, the God of Thunder from Nordic mythology. Land a winning combination and an extra reel is added along with a multiplier. Add 12 more reels and trigger the Infinity Bonus worth 888x the stake. What’s more, there’s the Jackpot Respins feature from which you can win the Grand Jackpot worth 2,000x the stake. Find out more about this impressive slot machine in our detailed Thor: Infinity Reels Slot Review. 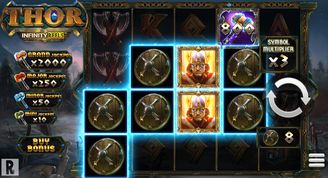 Join Thor, the Norse God of Thunder, defender of Asgard and son of Odin, into an exciting reel adventure in the new online slot from ReelPlay. The Thor: Infinity Reels slot uses the Infinity Reels mechanic that we’ve already seen in games like Gargoyle Infinity Reels, Giza: Infinity Reels, Tiki Infinity Reels Megaways, and more. With the help of Infinity Reels, each win adds a new reel from the right and increases the progressive multiplier by 1x. You’ll also benefit from Infinity Bonus and Jackpot Respins and play for the chance to win up to 6,055x the stake. 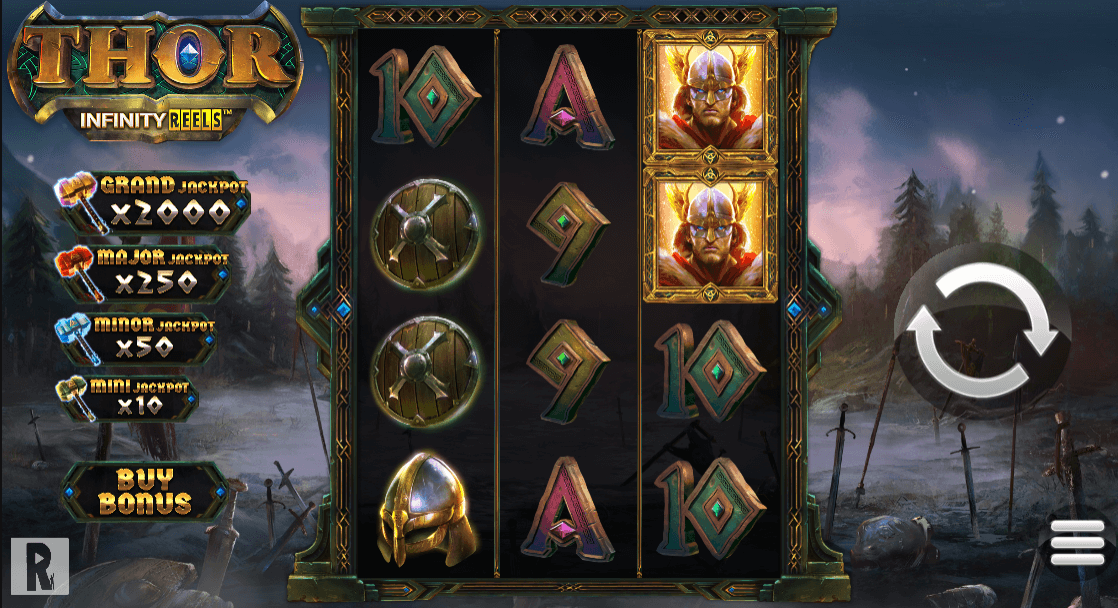 Thor: Infinity Reels is a new online slot from ReelPlay. It uses the Infinity Reels mechanic and is based on Thor, a god from Nordic mythology. The game starts with 3 reels which increase with every winning combination you make. When the reels increase, the win multiplier will also increase by 1x. Once the wins stop landing, the game resets to its original format. Wins are paid for landing matching symbols on consecutive reels, so there are no fixed paylines.

In the Thor: Infinity Reels slot from ReelPlay, you can place different bets starting from £0.20 to £40 per spin. The game is well designed and has the potential to become increasingly popular, thanks to its bonus features and in-game mechanics. In this slot, you’ll benefit from wilds, symbol multipliers, re-spins, Infinity Bonus, and fixed jackpots of up to 2,000x the stake. What’s more, the maximum amount you can win from the Thor: Infinity Reels slot is 6,055x the stake. 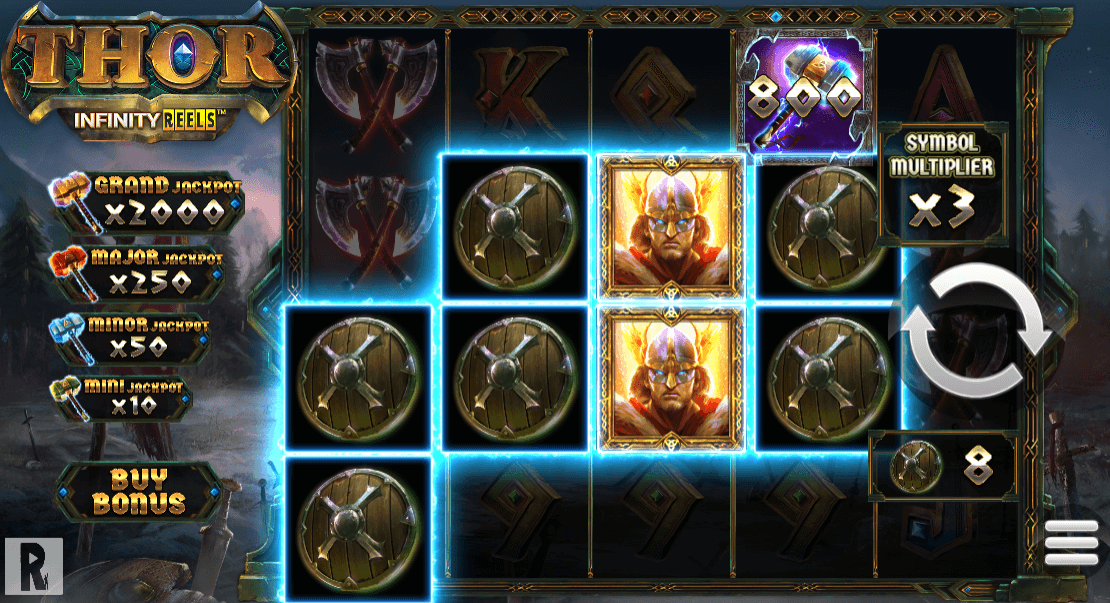 Thor: Infinity Reels is a well-designed slot machine that takes players on an exciting journey to the land of Asgard. As we’ve mentioned above, the game is based on Thor the son of Odin, defender of Asgard and the God of Thunder. Such a game with an epic theme deserves a high-end design and ReelPlay managed to do that.

When you start the game, there are only 3 reels, but the Infinity Reels mechanic will keep adding more, so the game area always changes. The reels are placed in a dark forest, showing a battlefield in the background, with swords and armour on the ground. There’s an epic soundtrack playing while you spin, which makes a perfect fit for this game.

The paytable consists of different symbols, divided into low and high-paying ones. The low-value symbols are the standard A to 9 Royals, while the high-paying symbols include a horn, a wooden shield, helmet, and a pair of axes. Moreover, Thor is the wild symbol that substitutes for all regular symbols to help you complete a win, while his hammer is the scatter.

The theoretical RTP (Return to Player) of the Thor: Infinity Reels slot is 96.20%, which is the industry standard for online slots. According to ReelPlay, you should land winning combinations every 3-4 spins on average. The game has a high variance meaning that you’ll land less frequent but more valuable winnings.

As it was previously mentioned, the maximum win from a single spin is 6,055x the stake. Apart from this, you can win up to 4 fixed jackpots, as well as Infinity Bonus. Here you can read more about the Variance, Volatility and RTP in online slots.

In the Thor: Infinity Reels slot from ReelPlay, we meet the mighty God of Thunder. The gameplay is dynamic thanks to the Infinity Reels mechanic which delivers the main action. This adds extra reels when you form winning combinations and it also brings increasing multipliers into play. While you spin, you can also trigger a couple of other bonus features and end up winning huge jackpot or cash prizes. 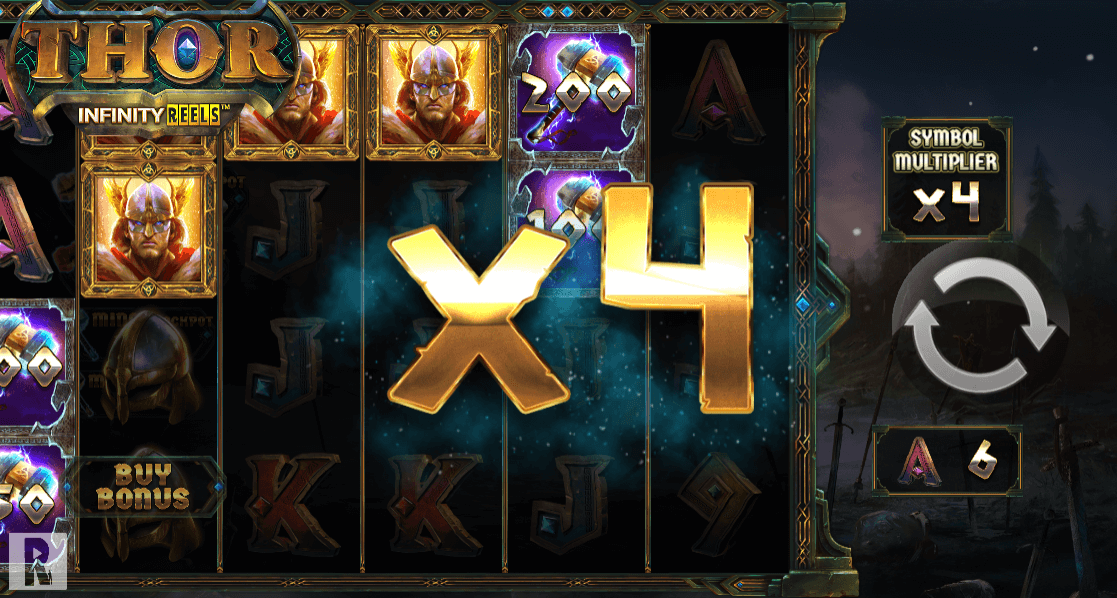 The base game starts with a standard 1x multiplier. However, the multiplier will increase by 1x for each new reel that is added thanks to the Infinity Reels mechanic. This is called the Symbol Multiplier feature. There is no limit to how high the multiplier can go.

If you manage to land 12 extra reels, you’ll trigger the Infinity Bonus feature. Then, you’ll win an extra 888x jackpot, along with the Symbol Multiplier. 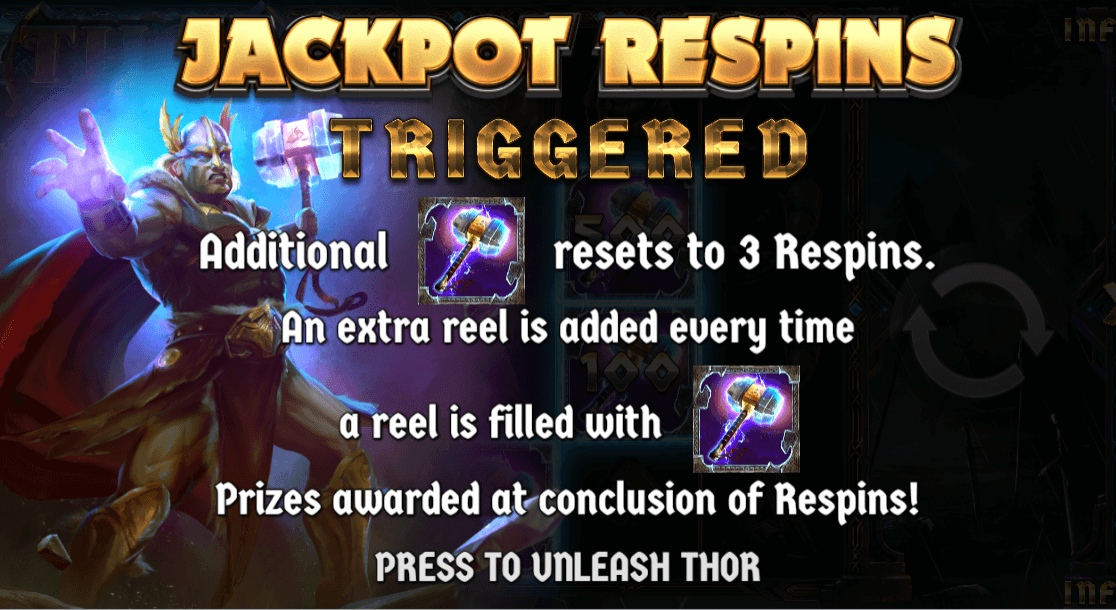 There is no Thor without his hammer, so the hammer has an important role in the Thor: Infinity Reels slot. When you land 6 or more hammer symbols on the reels, you’ll trigger the Jackpot Respins feature. Then, you’ll receive 3 respins and the triggering hammer symbols are held on the reels.

If a new hammer symbol lands during the respins, it locks in position and the number of respins resets to 3. When the respins end, the prizes attached to the hammers are added together and a payout calculation follows. Each hammer symbol is worth between 1x and 100x the stake. You can also win one of the 4 fixed jackpots in the Jackpot Respins feature.

On top of the high-end design and graphics, the Thir: Infinity Reels slot is designed with HTML5 which makes the game mobile-friendly. You can easily access the game on any Android, iOS and Windows device where it will perfectly adjust to your screen.

Is There a Jackpot on Thor: Infinity Reels Slot? 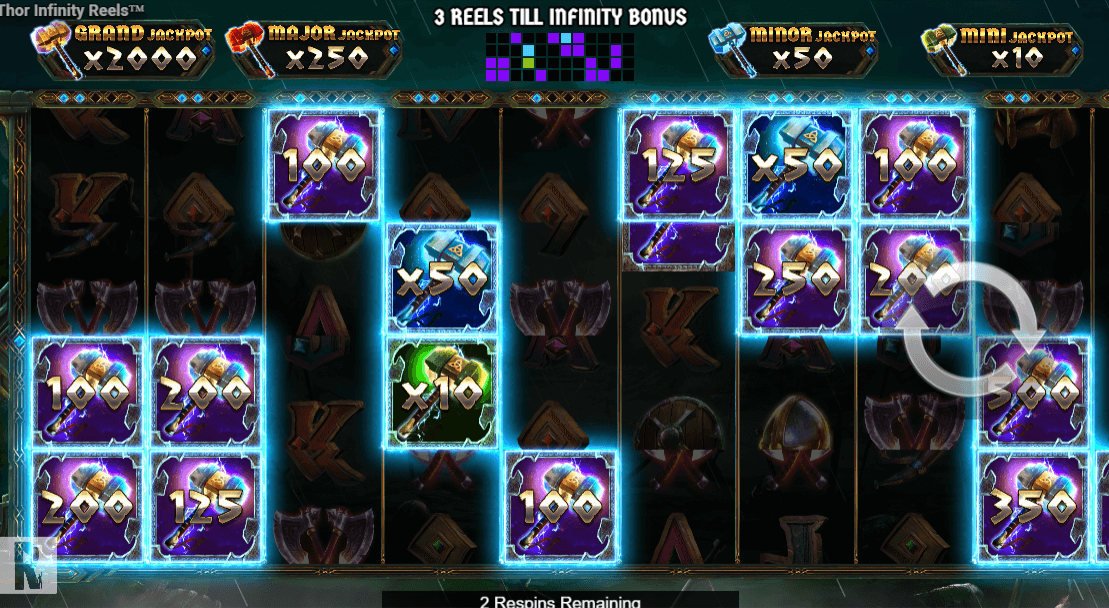 ReelPlay is a popular developer in the world of online slots, mostly known for its Infinity Reels mechanic. As a result, a number of Infinity Reels slots can be found in the developer’s collection. For example, check the El Dorado Infinity Reels slot and enter the jungles of Central America to search for lost gold. It’s a well-designed slot where you’ll also benefit from Infinity Reels and Symbol Multipliers, but also from Free Spins.

One of the latest ReelPlay slots with Infinity Reels mechanic is the Crystal Wolf Infinity Reels slot. This mysterious game will take you through dark prairies, following the pale moonlight for a chance to win great prizes. Or, you can check the Big Bucks Bandits Megaways slot, a game powered by the Megaways mechanic, where the number of ways to win can reach up to 117,649.

Explore the Thor: Infinity Reels slot by claiming a welcome offer right from this page and play at top-rated online casinos.