The game comes with three rows and five reels that spin across 30 always active paylines. The slots experts at Ainsworth have given the game a medium variance and a theoretical return to player of 96.57%. All of this fits the rhythm that is dictated by dynamic gameplay. The maximum payout potential in Action Dragons is 1500x multiplied by the winning bet. 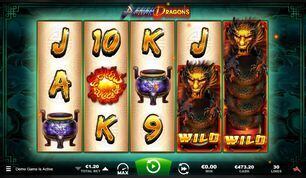 A slot game that involves dragons always brings a thrilling reel adventure. As it is usually the case, a game with dragons is either an epic fantasy or is set in the Far East, in the midst of symbols for luck and fortune. The game at hand is called Action Dragons slot and is made by Ainsworth, who have turned it into a wilds-heavy adventure.

The players will find a set of bonus features and extras. Besides the wild that can expand on more than one position on the grid, Action Dragons comes with scatters, a free spins bonus and win multipliers during that feature. All in all, it is an amazing game to consider playing.

In terms of the graphic design, the Australian company has managed to grasp the essential nature of the dragon, even though it is a mythical animal. When it appears as a stacked wild, the beast coiled and ready to attack. Every time there is a win with the expanded dragon, the reel-set is lit in flames around the symbols that form that winning outcome.

Action Dragons slots has two sets of symbols. The low-paying category consists of the high cards and the royals, while the hiogh-paying symbols are various objects of luck and fortune that appear across Imperial China, such as a Chinese character, the yin and yang symbol, a golden coin tied in a ribbon, and a ball of fire which represents the sun.

How to Play Action Dragons Slot

This time around, it seems that Ainsworth has changed the layout of the controls buttons and settings. All of this can be found in the bottom of the reel-set, however, the arrangement is different and more orderly, as well as more intuitive.

All this is to say that starting your reel adventure should take just few seconds, so taht you may choose a bet from the available range which starts at a steep £1.00 per spin and has a maximum of £48.00. Why such a selection that starts at such a high price? That probably has to do with the game's payout potential.

One way to enjoy Action Dragon slot is by activating the autoplay mode, which enables players to kick back, relax and witness the reel adventure unfold without making any manual inputs. A set of additional settings that are optional, lets you place controls on the balance spend.

Last but not least, the Max button sets the bet to highest in one move, and the paytable can be viewed from the menu button in the bottom left corner.

How to Win Action Dragons Slots

Making wins in the game requires at least three matching symbols to occur on any of the 30 paylines. Optimal wins are made with five matching symbols, and there is a wild symbol to cover for all, except the scatter/bonus symbol.

It is quite compelling that Action Dragons has three symbols that pay the same prizes, well, almost. The yin and yang symbol and the Chinese character pay identical amounts -

and the Action Dragons scatter disc pay  1.2x for three, 3.33x for four and 10x for five matching symbols. The scatter pays ten times these symbols when in the highest payout instance, or 100x multiplied by the bet for five.

The wild symbol is considered as an extra feature because it expands across the entire reel and because it can appear on multiple reels at once.

Three scatters trigger 10 free spins. During the free spins the dragon wild appears in the middle three reels and the green scatter appears on reels one and five, but only in the bonus also.

The green door symbol triggers three Lucky Multiplier Bonus Spins where multipliers of 2x, 3x and 5x can appear on reel three to act as wild symbols. Perhaps this explains why the symbol payouts are lower during the bonus feature compared to the base game.

On the other hand, the multipliers are guaranteed. The first spin factors in 2x, the second spin 3x and the third 5x.

Players who are interested in this multiplier and expanding wild slot can check it out for free, with the help of free credits that come with demo slots. These games are available at some online casinos who host games in practice play mode.

This release is typical for Ainsworth, yet it comes with notable differences. Because the smallest bet starts quite steep, it is only a matter of resolve for most players to actually try the game and get a sense of what it can do. Our guess is it is the free spins feature where Ainsworth usually lessens the symbol payouts but throw in guaranteed 2x, 3x and 5x multipliers.

Discover the Action Dragons slots by claiming a welcome offer right from this page and play at top-rated online casinos.