Discover outer space when you play Space Enigma. The game has 10 paylines, has a lot of gems in it and a maximum payout prize of 1000x on the winning bet. The game tries to mimic Starburst, but on a positive note, it has a low variance and a higher RTP compared to its predecessor. 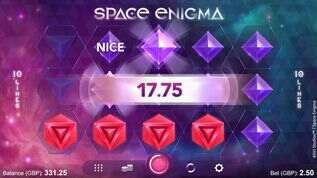 Play the Space Enigma slot for a chance to win wilds, sticky wilds and respins towards the possible maximum payout of 1000x.

The game in front of us does take place in the colorful fusion of gasses and stardust, out in open space, it does have ten paylines and involves geometric shapes of various angles. But it isn't Starburst slot, not quite. This is Space Enigma slots which comes by way of All41 Studios on behalf of Microgaming.

The game offers a standard reel-set of three rows and five reels. The paylines are fixed and winning outcomes are drawn from three symbols of the same kind falling on one or more payline. So what else can a game that looks like a Starburst dead-ringer offer really, besides its profuse originality?

For starters, we have a top symbol payout of 50x multiplied by the winning bet, while Starburst's highest paying symbol brings 250x but on the payline bet. Besides this accolade, a single notable feature are the respins and there is a wild to save the day.

Space Enigma lacks a free spins bonus, which isn't quite the way of differentiating oneself from a game that may as well be played by every third player out there right now

Now that we've taken to comparing and contrasting, we see that this All41 Studios game can't escape the shadow of that other game, so we shall too continue following the same vein.

Design-wise there is little that distinguishes Space Enigma slots from Starburst. The symbol that we got to see stopping on the reel-set most often is the star, which is a replica of the said game.

Furthermore, all other symbols are geometrically-devised to mimic the symbols of its counterpart. Symbol payouts are maked by splash animation that treats the event with light and stardust.

Throughout we have a musical theme that is quite decent to say the least.

How to Play Space Enigma Slot

You adventure with the gems in outer space can start with the push of the Spin button, which is located just underneath the third and middle reel. To the right of it is the autospin button and another click to the right is the cog, which loads the settings.

To change the bet from whatever the default it, press on the two coin stacks button, which is to the left of the Spin button. This is where you can select from a range of bets that start at ten pennies per spin and end at £100.00. These amounts reflect coin sizes of one penny per payline and £10.00 for the maximum.

Setting up the autoplay option is easy as it requires selecting a number from the presets. Once you have selected how many automatic spins the Space Enigma slot is going to make on its own, you can add optional stops that let the game watch over the balance, while you are enjoying the show.

To toggle on or off the sound and to enable turbo spins (makes the reels move faster), select the corresponding buttons from the settings icon, which is the cog. The paytable along with the Space Enigma gameplay information can be found in the nine dots icon on the left.

How to Win Space Enigma Slots

The payouts on a slot of three rows and five reels come with three symbols of the same kind falling on one or more of the game's ten paylines. The gems put up a nice display upon a winning combination and the payouts are pretty all-right.

Looking beyond the visual aspect and the duplicate experience that it may invite for some players, the game has a wide range of bets, which on the ten paylines can extrapolate to good multipliers for the payline.

The most valuable symbol on Space Enigma slot is the yellow gem, which pays 50x on the winning bet when five of the same fall on a payline. The red gem pays 12x, significantly less but still, a good amount.

The game doesn't have a free spins bonus but there are the respins, which are triggered by the wilds, which in turn land on the middle three reels only. When a wild lands the game grants a respin with the wild in place. Additional wilds trigger additional respins.

Play to test game if you really want to, by finding it as a free play demo at online casinos that host demo slots.

One last time and we’re through saying it - the game looks like Starburst, but then, Starburst slot looks like another game that predates it by several years (Power Stars slots). Nevertheless, the respins may be worth something when you land the high-paying symbols.