The game comes with multipliers, wilds and a buy feature that gives you a free spins bonus at a cost of 100x on the active bet. The multipliers during the bonus can stack on top of the reels and they multiply what is already there. This could lead to potentially huge wins for those who are lucky to get repeated star symbols. 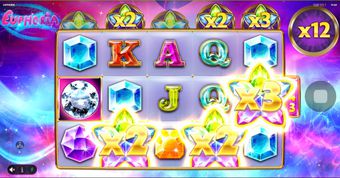 iSoftBet are back to impress with a game inspired by the legendary Starburst slot, however, with more features and notable differences. Perhaps the only thing that reminisces of the said classic are the symbols and the layout of three rows and five reels, but much else is different, including the buy feature option.

Euphoria slotplays on 243 ways to win and each of the reels has a diamantine symbol on the top, which is there to mark the active multiplier, or multipliers because these occur on more than one reel. Another extra feature besides the standard wild symbol is a free spins bonus, which brings about eight spins.

The payout mechanism entails wins on consecutive reels which must begin on the leftmost and continue on uninterrupted. For a win outcome you'd need three matching symbols and optimally, five. The wild symbol can help in this regard.

In terms of the game design, iSoftBet have done a classical and oft-seen theme a great makeover. The symbols are still on the reels but they do bring out their best shine when become part of a win outcome. The wild symbol is especially vibrant and lively, as the background to the wording twirls inside in a cool way.

The Euphoria slots can offer a very speedy gameplay, especially if you toggle on the turbo button or, if you are playing on a personal computer, the space button can have the reels spin at the speed of light. One of the most amazing features in terms of the look and feel of the game is the music.

How to Play Euphoria Slot

The fun and games can begin with the push of the spin button, which will always have all 243 ways to win work in your favor. This button is located to the right of the reels. Above it is the utoplay button and below is where you can select the bets.

Before you make the first spin it is always smart to check out the casino's default bet. This sum is displayed in the bottom right corner of the screen. To change the bet press hte poker chip button and select yours by choosing the coin value.

In this regard, Euphoria slot offers the minimum of one penny, which entails a bet per spin of £0.30 and the maximum of £30.00 which comes by way of choosing one pound for coin value.

On the left-hand side of the reels is Euphoria's buy feature button. The cost of the feature is 100x the active bet, so if you are playing with £0.60 per spin the feature will cost £60.00 and in return you get an instant free spins bonus, during which you can win up to 20,000x on the bet amount.

You can take on the game hands-free and enjoy the show by pressing the autoplay button. This lets you choose from the automatic spins presets which are between five and 100, and add the optional loss limit and a stop on a win amount.

How to Win Euphoria Slot

When it comes to the win outcomes the game has five high-paying symbols which are represented by gems and diamonds, while the low-paying symbols are the four royal cards.

In terms of value, the most valuable symbol on Euphoria slot is the diamond, which brings 13x multiplied by the winning bet. The purple symbol pays 6.6x on the bet, the blue gem is worth 3.3x, the green 2.6x and the orange is 1.6x and all of these outcomes are for wins consisting of five matching symbols.

The wild is present both in the base game and free spins to substitute for any other symbols on the paytable, except the scatter/bonus.

The game has one bonus feature which comes with extras. It triggers with three of the Euphoria logo symbols, which land on the odd number reels. In the event, eight spins are granted.

During the bonus, the wild symbol can substitute for any except the bonus, and the star symbols come with a random multiplier. These can occur on any of the free spins.

The number they carry is posted above on the reels however, each subsequent star symbol adds to that number and they all multiply.

The total  multiplier is displayed in the upper right corner of the screen.

The slots experts at iSoftBet have released this game as a free play demo, to enable the players to try it before playing with real money. This is possible at online casinos that host demo games, such as those that are offering a welcome bonus on this page.

Finally, an online slot that rivals Starburst in terms of gameplay and potential payouts. 20,000x is a huge sum, and a significant part of it can be won thanks to the multiplying multipliers and with the help of the wild symbols.

Discover the Euphoria  slots by claiming a welcome offer right from this page and play at top rated online casinos.