Let the Mariachi liven up your Day of the Dead on the Dia Muertos slot - a game of five reels and more than 3000 ways to pay in the consecutive win style. Each win results in a respin and subsequent respins can turn your buck into a bang, because reaching five will result in seven bonus spins. 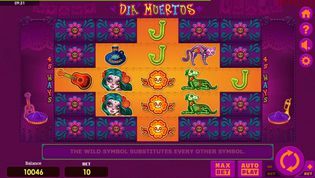 Discover the Dia Muertos slot and play for a chance to win consecutive wins and respins, towards top symbol payouts of 5000x.

Day of the Dead or Dia de los Muertos is perhaps the most iconic of the holidays that are celebrated in Mexico. It celebrates those who've left this world, but this is done it in a way that is festive, cheerful and charming as well.

The slots developers at Amatic have created an online slot game on the theme called Dia Muertos slot. It isn't the only one in the history of slots machines, but it certainly one that brings the most imagination on the reel-set, besides the potential winnings.

The game takes place on a diamond-shaped reel-set of five reels that are crossed by two one symbol rows, two three symbol rows and one five symbol row. In other words, it is a game that offers an irregular reel-set at the beginning which can subsequently expand to cover a greater number of fields, with 25 at the maximum.

Dia Muertos slots boasts of a number of high-paying symbols where the top paying one brings 5000x on the payline bet. When the reel-set has become open to the fullest during the ultimate respin, the total number of ways to pay rises to 3125.

The game design reflects a festive environment filled with the memorable skeletons which portray the Los Muertos of Mexico. The slots experts at Amatic have created an impressive array of symbols that come to life in the dynamic gameplay of Dia Muertos slot.

There is no way escaping the accompanying cliches, so players will find familiar objects and things such as cats gods, bottles of tequila, a Mariachi's guitar, and the inevitable man, that is, skeleton in a sombrero.

A Mariachi musical theme keeps company to the players willing to see the game blow-out its ways to pay to the maximum, where the payouts can get sweeter and stronger.

How to Play Dia Muertos Slot

The adventure on the reels can begin once you have selected the amount of the bet. To do this use the minus and plus buttons on both sides of the spin button. This will raise the amount that can be seen in the BET window.

The smallest bet is 10 credits which translates to £0.10 per spin, while the biggest bet is 1000, which is £100.00 per spin. The amount of the bet doesn't influence the number of active paylines, as these rise and contract with any given amount.

The Autoplay button is there to configure the automatic spins. You can choose one of the presets and that will send the Dia Muertos slot for the specified number of automatic spins. The game will deduct the selected bet with each spin.
The paytable is a nice source of information about the bonus features and the amounts each symbol carries depending on the number of times it appears on the reel set.

How to Win Dia Muertos Slots

Payouts in the game are made with three or more symbols of the same kind, when they fall on consecutive reels. There can be more than one symbol win resulting from the same spin.

In terms of the payouts, Dia Muertos slots packs some amazing prizes. The most valuable symbol of the game is the pretty girl with the Dia de los Muertos makeup. Five of these symbols are worth 5000x on the highest line bet.

Even the low-paying royal cards symbols category come with a rather generous scale of payouts, between 200x for three of a kind and 1000x for five.

The wild substitutes for any other symbol in the game and the game doesn’t offer a scatter symbol, but nevertheless, there is a bonus feature.

Every win starts with a respin and during this feature the reel-set's ways to pay expand and each subsequent win results in a new respin.

If Dia Muertos slots triggers five consecutive respins the players will get to enjoy seven bonus spins. In the bonus game each win will add another bonus spin.

Those players who are interested to check out this game and see if it’s one they’d play with real money, Dia Muertos demo is available at online casinos that host demo slots. On the other hand, the best way to test a game is to play several spins with the minimum wager.

We have an interesting mix between consecutive wins and a megaways slot, in that the game rewards respins on the win and the wins can extend a number of turns, ultimately resulting in the bonus spins round. The payouts are quite something and most players will find the theme amusing.

Claim a welcome offer and discover Dia Muertos slot at the online casinos on this page.