Go on a quest for gold on this Amatic game of 10 paylines and a 1000x top payout, plus other hefty prizes with the high-paying symbol. The game has a free spins bonus on a paying scatter, of three, four or five of these symbols anywhere in view. Free spins can be selected with a multiplier of x3, x5 or x9 on the wins. 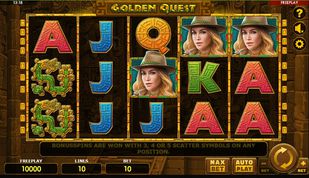 Discover the amazing adventure through the temples of Maya, on the Golden Quest slot which comes with a top payout of up to 1000x on the winning bet.

The slots experts at Amatic Industries are extending an invitation to embark on a gold discovery quest, deep in the jungles of Maya. The game at hand features a heroine, a counterpart to Rich Wild from the Book of Dead slot, who is eager to get as many of those high-paying gold-plated symbols as possible.

Slots players that get on the Golden Quest slot will discover a reel-set consisting of three rows and five reels, which spin across 10 always-active paylines. This arrangement calls for three matching symbols minimum, for a payout, and these outcomes must begin on the leftmost reel.

The entertaining and potentially lucrative base-game on the Golden Quest is enriched by a scatter/bonus symbol that grants  a free spins bonus in three different modes. While the game doesn't have a wild symbol, it certainly does have one that pays a jackpot prize - of 10,000x on the payline bet.

In terms of the graphics design, Amatic have made a game that is marked by big, chunky symbols made in the style of Mayan caligraphy.

The high-paying symbol category consists of a number of golden relics, while the low-paying symbols are the cards ranging between jack and ace.

The special symbol is the scatter, which is a Maya ceremonial mask, done in gold, of course, and the game's most lucrative symbol is that of the adventuring missus.

Symbol wins on the Golden Quest slots are marked by the symbols pulsating in place and there is a streak of lightning passing through them.

How to Play Golden Quest Slot

Your adventure through the coridors of Tikal can begin with the push of the spin button, which is the big round one located in the bottom right corner. Press that button once to send the reels spinning once, for the cost of the active bet, whose amount is displayed in the window labeled BET.

Speaking of the bet, this setting can be chosen by utilizing the minus and plus buttons in the bottom right corner, buttons which flank Spin on both sides. In that respect, the bets have a wide range, making the game accessible to casual and pro players.

The smallest bet per spin is ten credits , which amounts to penny per payline, to the effect of 0.10 total bet. The biggest bet is 3000 credits, which amounts to 300 pounds per spin, but there are many options for the bet between the two ends.

Those who wish to let the game play on its own, drawing the active bet once for each spin, can press the AutoPlay button. The automatic spins begin immediately, until the same button is pressed again.

How to Win Golden Quest Slots

Winning in the game requires many strong win outcomes that will boost your balance and let you leave the game with more money than you started playing, if this is your objective.

Payouts in Golden Quest slot are made with three matching symbols, or more, falling on one or more paylines. The stronger wins are made with the two golden ornament symbols of which both the bird and the snake pay 4000 credits which is 40x the winning bet.

The most lucrative symbol is the adventuress, whose symbol is worth 100000 credits when won with a bet of 100 credits, which means it pays 1000x on the winning bet.

The scatter is the second highest paying symbol with 500x on the winning bet.

The scatter symbol triggers the free spins bonus when it lands in three, four or five places on the reel-set. The players can choose the mode upon the trigger.

Five free spins and a multiplier of x9 on the wins is the dead with the blue mode, the green mode states 10 spins and a x5 multiplier and the red mode gives the smallest multiplier value atx3 but the most spins at 15.

This game is available as a free play demo slot, courtesy of Amanet and Amatic, as they have the custom of releasing many of their online slots in this manner.Golden Quest can be found at online casinos that host demo slots for registered players.

Needless to say, the game has four symbols that are quite lucrative. Choose your lucky free spins mode to make the most  between the free spins and the multipliers. With such a paradigm for the potential wins, it may not be such a bad idea that the slots experts did not include a wild symbol.

Discover the Golden Quest slots by claiming a welcome offer right from this page and play at top notch online casinos.