Discover who the Kingmaker is in this MegaWays slot game by Big Time Gaming. With a free spins bonus triggered by three scatters and 16,807 ways to pay, this is one the signature megaways editions. The highest paying symbol awards a 10x on the winning bet, and there are in-game multipliers that could go up to 30x during the free spins. The top payout is 10,000x while the return to player (RTP) stands at 96.65%.

Play the Kingmaker slot for a chance to win rising multipliers, free spins bonus games and a top payout of 10,000x!

Kingmaker slot is one of Big Time Gaming’s Megaways online slots that provide you with 16,807 ways to win. Playable from £0.20 to £20.00 per spin, you can spin the five reels of Kingmaker for the chance to accumulate Gem Multipliers. You can carry over these multipliers to the free spins round for the maximum win of over 10,000x your wager. With such winning potential, Kingmaker truly is a game fit for a king!

Everything in Kingmaker is designed to follow the royal, medieval theme of the game. The reel set is placed at the centre of the screen and resembles a royal banner. It is placed against a backdrop of a royal castle with snow-capped mountains in the background and a clear lake in the front. The five reels of Kingmaker are transparent with patterned lattice like the castle windows.

As in almost all online slots, the symbols in Kingmaker are split into low values and high values. The low values are the six standard playing card symbols 9, 10, J, Q, K and A. The high-value symbols are the four coloured gemstones each representing a different animal. The green gem features a two-headed snake, the blue gem a gryphon, the red a minotaur and the purple is reserved for the dragon.

The special symbols in the game include a wild and a scatter symbol. The wild appears on reels two, three, four and five and substitutes for all symbols, except the scatter. The scatter symbol is a golden crown which also happens to be the highest-paying symbol in Kingmaker with payout of 250x your bet. 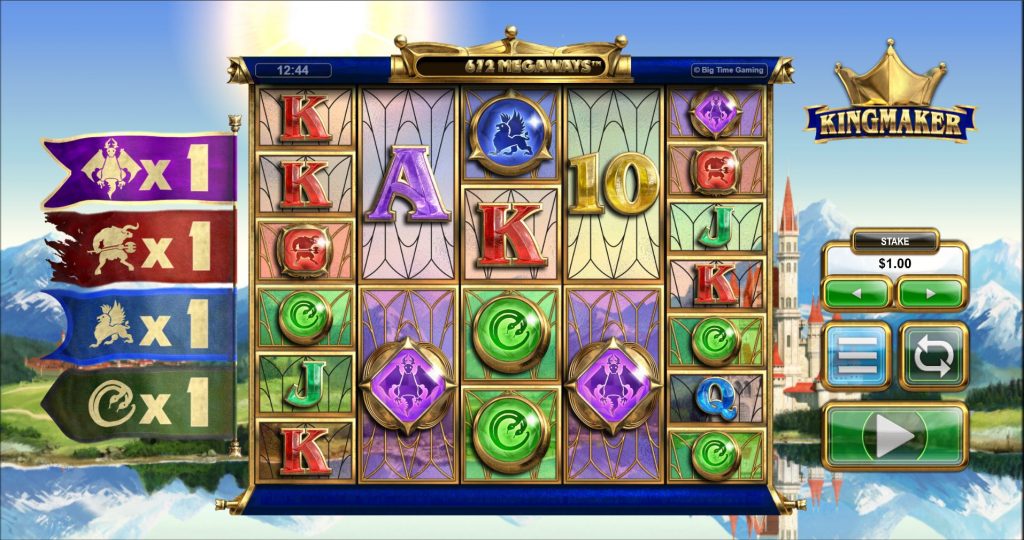 How To Play Kingmaker Slot

Playing the Kingmaker slot is as easy as it gets because you need to set only one variable before spinning the reels. Since the base game has a dynamic number of ways to win, you need to set only your stake for the spin. By pressing the green arrow buttons of the ‘STAKE’ box to the right of the reel-set, you can choose to play with any amount between £0.20 and £20.00 per spin. The maximum of 16,807 ways to win is active only during the Kingmaker free spins bonus round.

Once you’ve set your stake for the spin, press the green SPIN button and the reels will start spinning. If you want to play automatically, without pressing SPIN after each round, choose the autoplay option. Here, you can select from a pre-set number of rounds that let you enjoy the gameplay of Kingmaker.

As with almost all new slot releases, Kingmaker slot comes with a free play. This gives you the opportunity to try its gameplay before registering or depositing at a casino. The free play of Kingmaker has the same gameplay as the real-money version of the slot. All bonus features are available to trigger, and you can see them in action.

We would recommend you try spinning with different stakes to see how the game reacts and if there’s any difference in the payouts that you receive. You should play at least 100 rounds, which is enough to trigger some of the bonus features in the game. It goes without saying that since you play with virtual money, you can’t expect to withdraw your winnings from the free play of Kingmaker.

Once you feel you’ve learned all there is to know about the game, you should move to the real-money version of Kingmaker.

How To Win Kingmaker Slot

Once you have set the reels off, you want to see some winning combinations land on the screen. All wins in Kingmaker slot start at the leftmost reel and pay left to right on consecutive reels, except scatter. The payouts are multiplied by the stake with the wilds substituting for all symbols except Scatter.

As one could expect, the low-value symbols award smaller payouts. The high-value gem symbols are the ones to look for on the reels. The green, the blue and the red gems each award payouts for combinations of three, four and five matching symbols on a payline. The most valuable symbol in Kingmaker is the purple dragon gem. It pays a 10x multiplier on the winning bet when you land five consecutive matching symbols.

The base game comes with a feature called Gem Multipliers. Each time you land a five of a kind gem its win multiplier increases by x1. The current multiplier for each of the four gems is displayed on the four flags to the left of the reels. Gem Multipliers carry over to the free spins round and each multiplier will get you an additional free spin. As stated at the beginning of this section, Gem Multipliers are a base-game feature and reset when you trigger the Free Spins round. 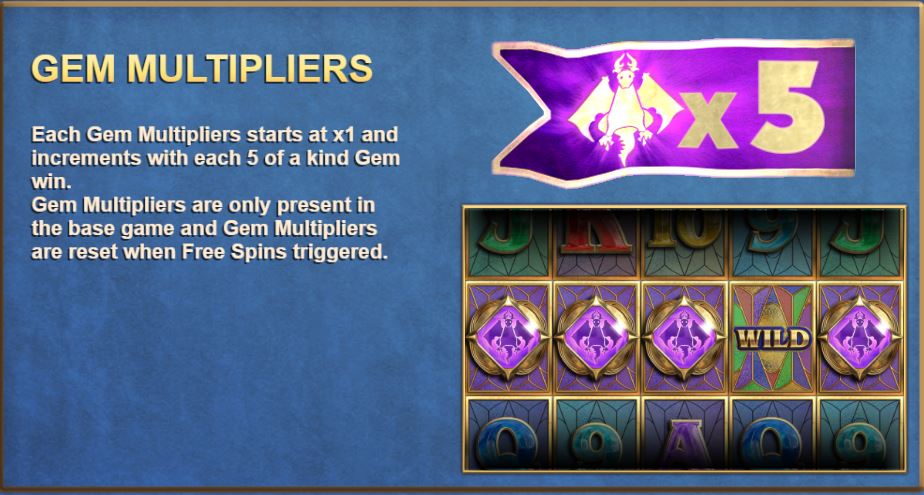 This Big Time Gaming edition has a scatter symbol that triggers the free spins round. Three, four or five of these symbols appearing anywhere on the reels will get you 7, 12 and 20 free spins, respectively. The best part about the feature is that you can re-trigger it by landing three, four or five scatters. Each of the spins in this bonus feature is played across 16,807 ways to win.

This MegaWays online slot by Big Time Gaming has a return to player rate above the industry average. Kingmaker slot has an RTP of 96.65% which just adds to the overall quality of the slot. At the same time, this is a highly volatile slot, which means that you could end up cashing large prizes.

When it comes to the variance of Kingmaker, it ranges between medium and high level. This means that you could expect anywhere between moderate to high payouts for a win with a moderate to low frequency.

Like all slots coming from Big Time Gaming, Kingmaker slot is available to play on different devices. You can spin the reels of this medieval online slot on any desktop, tablet or mobile device. Whether you’re playing on an iOS or Android smartphone, you’ll experience the same gameplay and quality. You don’t need to download any software or app. Just launch the game in your web browser and start spinning!

Unlike the rest of the MegaaWays slots, Kingmaker is a rather simple game, but it still looks great. It is all about the Gem Multipliers both in the base game and during the Free Spins round. The bonus feature could be quite lucrative if you begin with a big combined win multiplier.

Play Kingmaker slot at one of the casinos promoted here at Slotswise but make sure to claim your welcome offer first!