Players are going to find a Native American-themed slot that puts the wolf in the lead. The layout consists of four rows and five reels that spin across 40 always-active paylines. Winning outcomes can pay for at least three symbols and you can play Wolf Sierra with at least 10p per spin. The theoretical return to player of this game is 95.92% and the mathematical model spells out a medium variance. 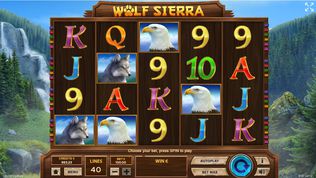 There are wolves aplenty in this Tom Horn Gaming slot that counts as a brand new online slot in 2020. The wolves are pretty too - white, fluffy, cuddly - except they are wolves. But they do bring a thrilling online game of chance that's called Wolf Sierra slot that comes with an exciting set of features that can help towards the maximum payout potential of 2000x multiplied by the winning bet.

The native theme of this game puts us on the vast expanse of the American wilderness where the players can land a dreamcatching Bonus symbol that can trigger the bonus feature. Wild symbols are represented by the white wolf and this is a symbol that can also pay a hefty prize, relative to the number of symbols. And because there are multiple paylines, players can land multiple winning outcomes from a single bet.

In terms of the theme, the vibe and the look and feel of this amazing game, Tom Horn Gaming has created a set of symbols and visual layouts that put us in the raw wild of Alaska. The background is of waterfalls and tall pine trees that provide a safe place for the reel set where wolves, owls and eagles reside. Watching over it all is a totem of an owl that stands tall and proud with its wings spread wide.

Wolf Sierra slots doesn't come with any complicated graphics and too many animated features. In this regard, the game is quite simple and that makes it very enjoyable. The bonus symbol shakes like a dreamcatcher and the wolf wild howls at the moon and both events are always pretty to see. Everything on the reel set is wrapped by a thrilling soundtrack of Native American flute and drum music.

How to Play Wolf Sierra Slot

Playing the game should entail some familiarity with the layout of the controls and buttons. Players who are new to online slots by Tom Horn Gaming are going to find all of the above in the bottom section of the screen.

The most important button is the only one that is blue in color and round, located in the bottom-right corner of the screen. Pressing it causes the spins to turn once and the active bet is deducted one time from the balance.

The Autoplay option is available on the Wolf Sierra slot. Pressing that button opens up a list with automatic spins presets which will make the reels spin that many times or until the bonus feature is triggered.

Those who play Wolf Sierra will find all of the gameplay details regarding the bonus features and the payouts in the 'i' button which opens up the paytable. This can be found to the right of the button for Spin.

How to Win Wolf Sierra Slots

Winning in the game requires at least three matching symbols to land on one of the paylines, however, it is also possible to land multiple payline wins from the same spin. This is especially valid in the free spins bonus where the wolf symbol comes to prominence.

Wolf Sierra slot has a set of low paying and a set of high-paying symbols. The latter category consists of the owl totem, the white-headed eagle and the wolf. These symbols can pay between 0.5x and 25x multiplied by the winning bet.

The set of royal cards, the ten and the nine cards pay between 0.10x and 3x multiplied by the bet. The wild is the most valuable symbol of the game, as it can substitute for any but the scatter and it can pay 5x, 25x and 50x for three, four and five of a kind.

There is only one bonus feature in the game but is a mighty one. The dreamcatcher symbol is the one that triggers the bonus. You need to get three of these on the middle three reels in order to trigger the bonus. In the event, the game starts you with five free spins, but during these, the wild symbol becomes sticky and remains so until the spins have expired. Each bonus symbol adds one extra spin. This is where the game makes it possible to land big wins, of course, with the help of the wild symbols.

Players will find the game available as a free play demo slot at online casinos that host games in practice play mode, thus enabling players to experience the feature and the gameplay with free credits.

Start your Wolf Sierra slots adventure right from this page, when you claim one of the welcome bonuses.