Get ready for an encounter with the beautiful wild cats in the King of Cats Megaways slot from Big Time Gaming. As expected from the provider, this game features the innovative Playerselect engine. This allows you to play either the Lion Game or the Puma Game. Each game offers different modifiers such as expanding wilds, mega wilds, multipliers, and unique free spins. With up to 56,620x stake wins, the fun never stops in this highly volatile slot. Find out more in our King of Cats Megaways Slot Review. 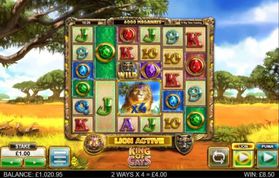 When it comes to Big Time Gaming, you can always expect to find a unique game with new mechanics and big payouts. Well, the same applies to the King of Cats Megaways slot. It’s a game with the popular Megaways engine, so you can play with up to 117,649 ways to win.

But, there’s also the new Playerselect feature that allows you to choose your preferred predator, the lion or the puma, and play their respective mode. Each one awards wilds, multipliers, and free spins, which can lead you to wins of up to 56,620x the stake.

If you want to learn more about this impressive game, carry on reading our King of Cats Megaways Slot Review.

About King of Cats Megaways Slot

Animal-themed slot with massive payout potential, excellent features and two games in one. What more can you want? The King of Cats Megaways slot is a new Big Time Gaming release. It plays on 6 reels and up to 117,649 ways to win, thanks to the Megaways engine.

The reels are dynamic and each one can have 2 to 7 symbols, which affects the number of Megaways (paylines) you play with. For more details, read our Megaways Overview where we explain how this mechanic works. 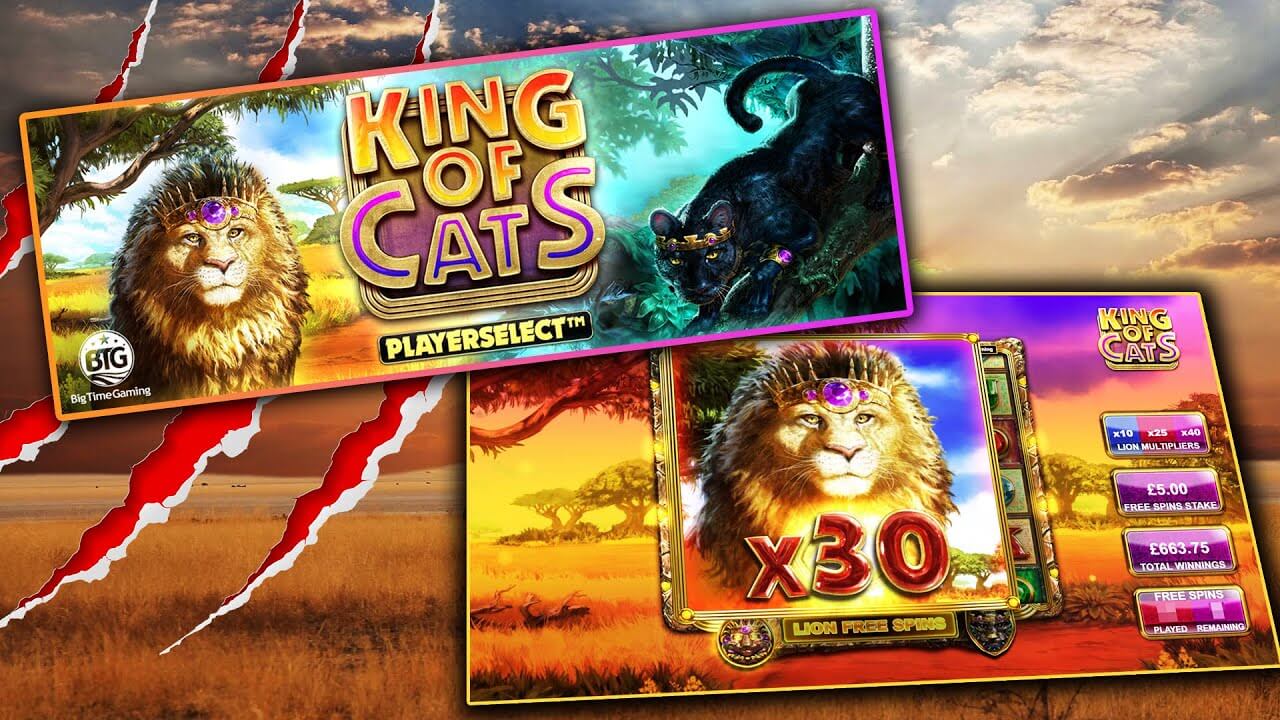 However, what makes the King of Cats Megaways slot unique is not the Megaways engine. Namely, the game incorporates a new engine, called Playerselect. There, instead of having one spin button, you have two - one for the Lion Game, one for the Puma Game.

You can click on either one at any time, so you can play one spin of the Lion Game, then one spin of the Puma game. Each mode offers its own extras. Both games come with wilds and multipliers and their unique free spins features. In total, you can end up winning 56,620x the stake.

You can start playing the King of Cats Megaways slot at stake levels that range from £0.10 to £10 per spin. To land a win, you need to land matching symbols on an active payline, starting from the leftmost reel.

The King of Cats Megaways slot has an animal theme and has high-quality graphics. The setting is different whether you’re playing the Lion Game or the Puma Game. In Lion Game, you’ll play in the African savannah. On the other hand, the Puma Game will take you deep into the jungle. 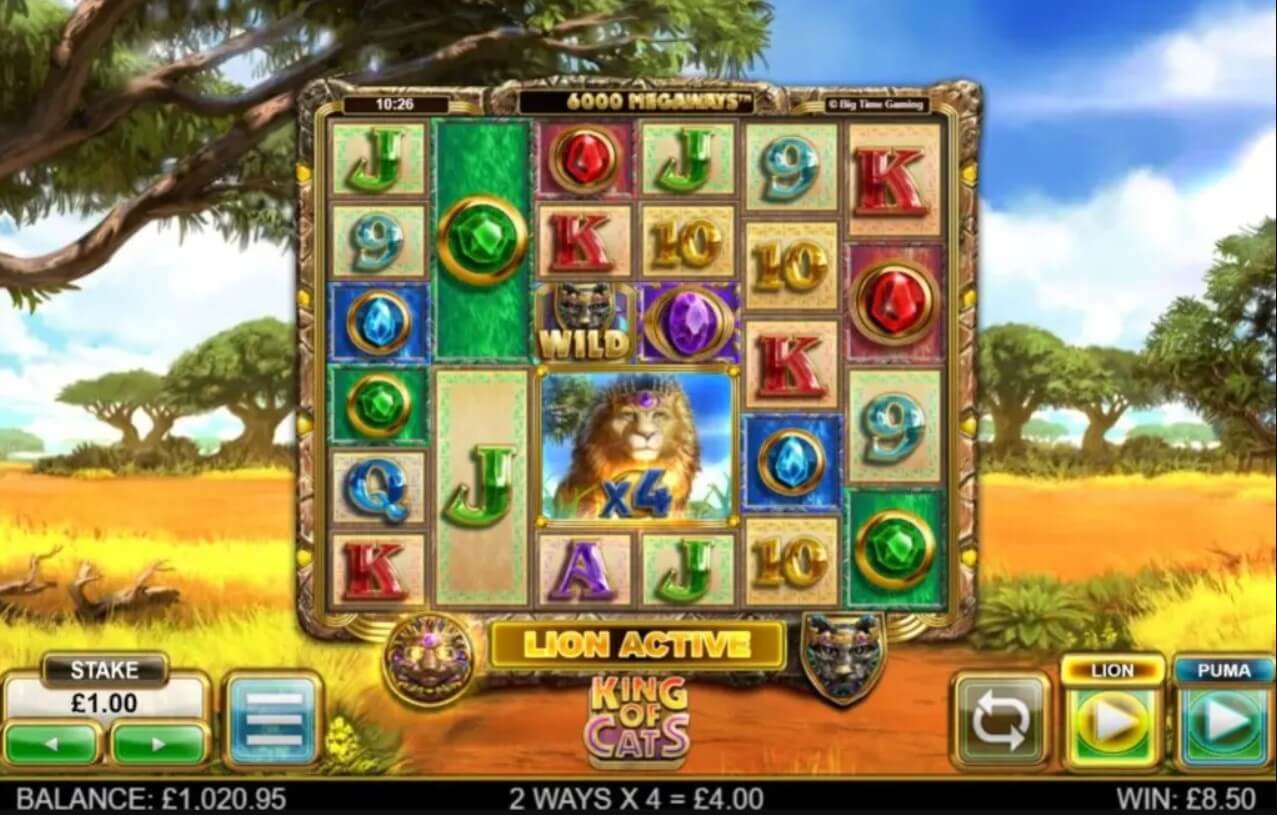 No matter which mode you play, you’ll receive a high-end design with dynamic gameplay. Moreover, a tribal soundtrack with rhythmic drums plays in the background, adding to the overall gaming experience.

The symbols are divided into low and high-value ones. The lower-paying symbols are the standard 9, 10, J, Q, K and A Royals in different colours. These pay up to 0.8x the stake for six in a combination. In addition, the high-paying symbols include gemstones in green, blue, red and purple colours, paying up to 25x the stake.

Furthermore, the King of Cats Megaways slot has two wild symbols - the Lion and the Puma. They appear on reels 2 to 5 only and substitute for all regular symbols to help you win. Finally, the gold coin with a paw print is the scatter symbol that triggers the Free Spins features.

RTP, Variance and Payouts for King of Cats Megaways Slot

The theoretical RTP of the King of Cats Megaways slot varies depending on which of the 2 modes you’re playing. The Puma Game comes with a 96.70% RTP, while the Lion Game has an RTP of 96.72%. As you can notice, both games have similar percentages and they’re both above the industry average.

Furthermore, the slot’s variance is high, no matter what mode you play. This means that you will land less frequent, but bigger payouts. In total, the King of Cats Megaways slot can pay you 56,620x the stake in a single spin.

If you want to learn more about RTP and variance models, read our detailed Variance, Volatility and RTP guide.

Gameplay and Features on King of Cats Megaways Slot

The King of Cats Megaways slot is the first game to feature the Playerselect mechanic. It’s a double game system where you decide whether you’ll play the Lion or the Puma game. Both modes offer excellent features, such as wilds, multipliers and free spins, so you’ll having a great time.

Let’s review the bonus features of the King of Cats Megaways slot in detail.

What makes the King of Cats Megaways slot stand out from the competition is the Playerselect mechanic. Namely, the game has two modes - Lion and Puma. You can choose which one you’ll play before any spin in the base game. Depending on what mode you choose, you’ll play with unique modifiers and features.

If you go for the Lion Game, the main modifier you’ll receive is the Lion Wild Multiplier symbol. On any spin, you can land a Lion Wild symbol as a 2×2, 3×3, or 4×4 sized tile. Each symbol comes with a certain multiplier attached to it:

Only winning combinations that include the Lion Wild will be boosted from the multiplier. 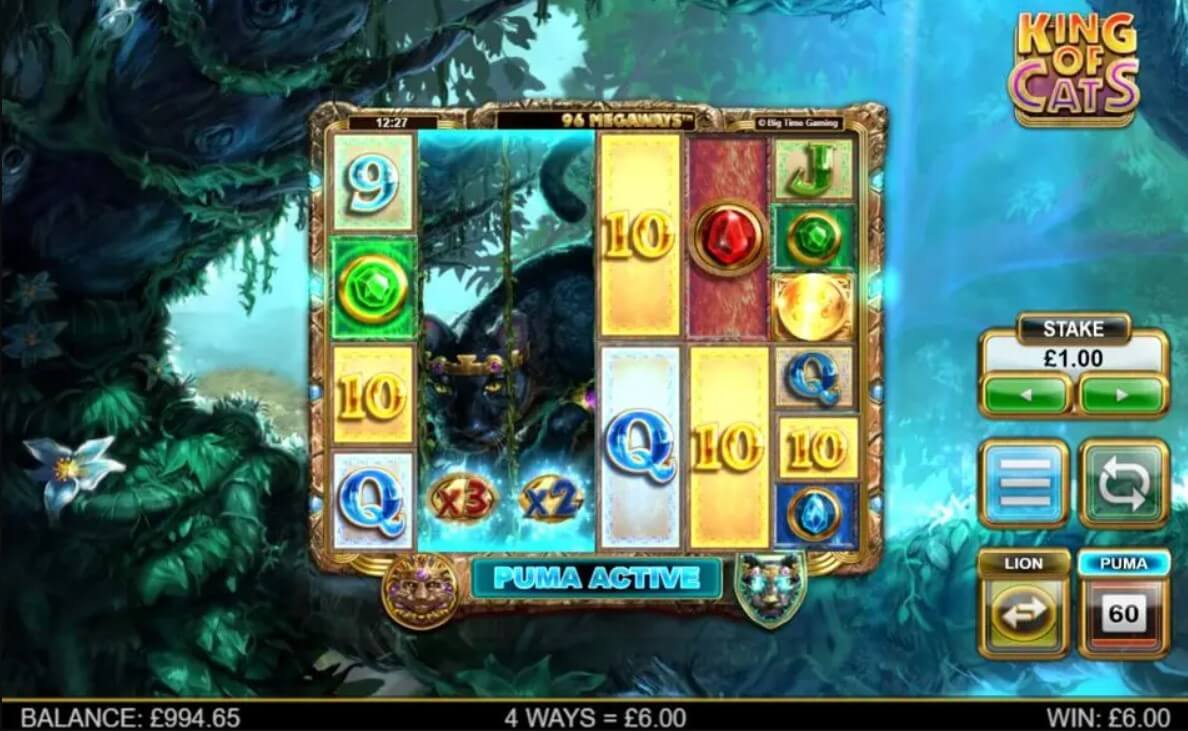 On the other hand, the Puma Game will introduce you to the Puma Wild Multiplier symbol. On any spin, you can see up to 3 fully stacked Puma Wilds appear on the reels. They will expand to full reel height and can land with a 2x, 3x or 4x multiplier attached.

Only winning combinations that include the Puma Wild will be boosted from the multiplier.

Just like we have two base game modes, so do we have two Free Spins modes depending on which cat was active during the triggering spin. Therefore, you can win the following Free Spins features: 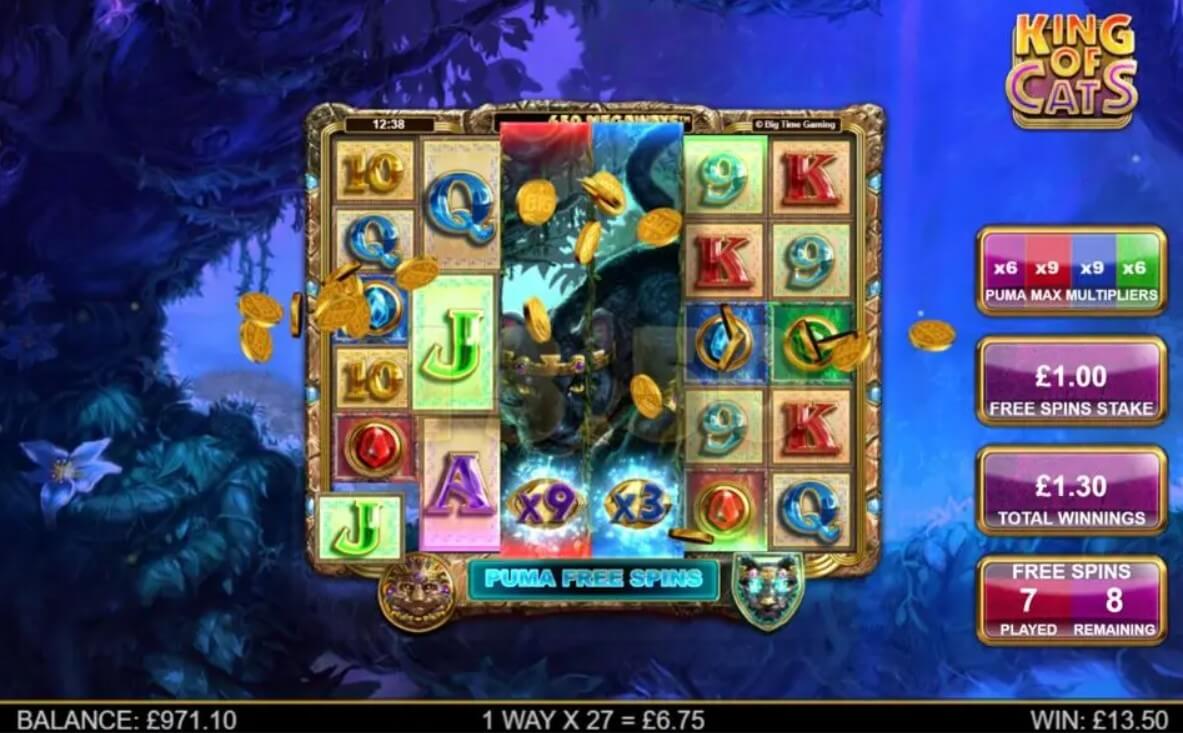 The King of Cats Megaways slot is optimised to work on all mobile devices, and it loads on any operating system without issues. The game is built with HTML5, so it’s adjustable on any mobile. The design, gameplay, and bonus features work perfectly on a smaller screen.

If you’ve loved the original Bonanza slot game, you’re going to enjoy the Bonanza Megapays slot too. This is a new online slot that combines the well-known gameplay from the original with 4 progressive jackpots. You’ll get the Megaways engine with wilds, cascading symbols, reactive wins and free spins with unlimited multipliers and retriggers.

Another top-notch release from Big Time Gaming is the Wild Flower slot. With top payouts of up to 114,100x your total stake, this is one of the best-paying slot machines you’ll find these days. Trigger the Free Spins feature and its Mega version where multipliers can reach a massive 800x the stake.

Finally, we recommend you check the Pop slot. It is played on 4 reels that provide 256 ways to win. There, you will benefit from the Dual Reel feature as well as from the Free Spins feature and will spin for the chance to win up to 66,960x your bet.

There are plenty of Megaways slots on the market, but Big Time Gaming succeeded in creating something unique. When playing the King of Cats Megaways slot, you’re basically getting two games in one. Both games are boosted by different modifiers and excellent payouts, to provide you with the ultimate gaming experience.

We really enjoyed testing and reviewing this Big Time Gaming release. If you’re looking for something new and fresh on the slots market, we recommend you to go for the King of Cats Megaways slot and benefit from both Lion and Puma games!

Explore the King of Cats Megaways slot by claiming a welcome offer right from this page and play at top-rated online casinos.