Wish Upon A Leprechaun Megaways Slot

Spin the reels of this six-reels and up to 1117,649 ways to win Irish-themed online slot from Blueprint Gaming. Wish Upon A Leprechaun Megaways slot is available to play on all devices from 10p to £10 a spin. It comes with cascading reels, four different mystery features, and a free spins feature with a possibility to get an unlimited win multiplier, plus random extras. The maximum payout that you could win on this Megaways release is 50,000X your bet for the spin! 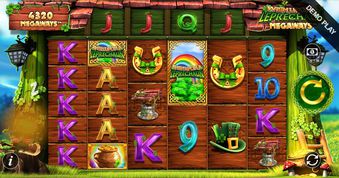 Wish Upon A Leprechaun Megaways Slot

When you launch the slot, you are greeted by cheerful Irish music with the slot reels placed inside a tree trunk. The entire reel set is set against a background of a green meadow with blue skies above. The top of the screen is reserved for the game logo and the Megaways display, while the bottom is where you can see information on your balance, bet and win. The three game buttons are placed to the right of the reels.

Wish Upon A Leprechaun Megaways Symbols

The low-value symbols in Wish Upon A Leprechaun Megaways slot include the six playing card symbols 9, 10, J, Q, K and A. All of them award certain payouts for combinations of three, four, five or six matching symbols on a payline.

The high-value symbols are theme related and include a golden horseshoe, a leprechaun’s hat, a magic well and the Wish Upon A Leprechaun logo. The logo is also the highest-paying symbol in the game and awards payouts for combinations of two, three, four, five or six identical symbols.

The Celtic sign is the game’s Wild symbol and only appears on the horizontal reel above reels two, three, five and six. It replaces all other symbols, except the pot of gold Scatter. A golden four-leaf clover is a mystery symbol which transforms into any symbol, except the Wild and the Scatter.

How to Play Wish Upon A Leprechaun Megaways Slot

If you prefer playing without pressing the spin button after each round, you can use the autoplay option. Press the round button with two inverted arrows and select the number of rounds and other additional settings. Press play and the reels start spinning for the current bet. You can stop autoplay by ptessing the stop button at any given time.

Wish Upon A Leprechaun Megaways slot is also available as a free play or demo version. This version of the slot is almost identical to the real-money version of the game and differs in one aspect only. Since you are playing with virtual funds, you can’t withdraw any eventual winnings from the game. Everything else in it is just like in the original game. You can set the bet, spin the reels, trigger the bonus features and even land the highest available payout.

How To Win Wish Upon A Leprechaun Megaways

With every winning spin, the winning symbols disappear and make room for new ones to replace them. This is a chance to land winning combos again and again on one spin. The Cascading Reels keep coming until there are no more new winning combos formed.

There are four reel modifiers that are randomly triggered in the base game or the Free Spins feature:

This feature is triggered when you land three or more of the pot of gold scatters anywhere on the reels. The more scatter you land, the more free spins you get, because each scatter can reveal two or more free spins.

You can decide to gamble in order to win even more free spins or collect to enter the feature. You can win two extra free spins or lose them. You can gamble and win up to 50 free spins.

Once you enter the feature, the winning symbols get replaced with new ones. The Ultimate Win Multiplier feature takes place increasing the multiplier by 1x with each cascade.

Wish Upon A Leprechaun Megaways RTP

The RTP of Wish Upon A Leprechaun is 95.5% which is a tad below what’s considered an average.

Our Wish Upon A Leprechaun Megaways Slot Review

Wish Upon A Leprechaun Megaways slot comes with all the features that you’d expect a typical Blueprint Gaming Megaways to come. The bonus features are typical for Blueprint and we’ve seen them in previous Megaways releases.

Wish Upon A Jackpot

Wish Upon A Leprechaun