DIscover the Irish Magic slot by IGT which will be released in July this year. You can expect from Irish Magic to feature many great bonus features, as well as free spins. The Irish culture makes perfect sense to be included in slot games since its four-leaved clover is considered as a lucky symbol that brings much luck to the players. For that reason, IGT is preparing this slot to become one of the most popular Irish-themed slots out there. 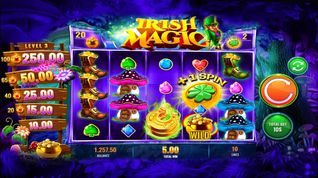 Irish Magic is a video slot developed by the IGT Group and will be released in July. This slot features five reels and 10 paylines. The variance is low to medium, so there might be a bit of risk, but this will be the kind of game that players expect to play and win great prizes. In addition, the RTP of Irish Magic is 96.02%.

As mentioned above, Irish Magic will feature 10 paylines where betting is expected to range from £0.10 to £200, allowing bets of £0.01 to £20 for each payline. This slot doesn’t carry many risks as some of its competitors since it has low to medium volatility. It offers some jackpots and bonuses, and its RTP of 96.02% tells us that the game will be fair enough.

From what we can see now, Irish Magic features the most popular symbol of the Irish culture - the leprechaun. This little guy is standing above the reels and is guiding the players through the game. In the Irish-themed slots, luck is in the air! So this summer, players will probably enjoy this slot and its great features.

In addition, the game will likely include different levels that players will have to achieve in order to receive more rewards and bonuses. Each level will include different jackpot which increases the chances of great winnings.

Irish Magic has such a great and attractive design. The background is dark purple, and you can see part of the forest in the shadows. Above the reels, the leprechaun is guiding the game and rewarding you with great prizes and bonuses. When it comes to the graphics, it has high quality and outstanding symbols. Overall, the Irish Magic slot is well-designed and its quality won’t change, no matter if you play it on a desktop or a mobile device.

How To Play Irish Magic Slot

To start your path towards this adventurous Irish slot, start the reels by pressing the Spin button which is located on the right side of the reel. Similar to the other slot games these days, Irish Magic has the Autoplay feature that allows you to let the game plays by itself. To activate this, select the Autoplay button located next to the Spin button on the right side of the screen. There, players have the opportunity to select from the automatic spins presets or to specify their own bet according to their budget.

The bet per spin can be selected starting from £0.10 to £200, allowing bets of £0.01 to £20 for each payline. The bigger amount you bet, the bigger are the chances of winning the game’s top prizes. We will update this review once we know the game’s rewards more specifically.

From the current screens that have been released by the IGT Group, we can see that Irish Magic will feature various Irish-related symbols with great values. For example, we will have four-leaved clover, brown and green leprechaun’s boots, pink and blue houses, and a golden horseshoe. In addition, there is a wild symbol presented as a bag od golds. Moreover, little gems are also included in the game, shaped like hearts, circles, leaves, tears, and diamonds.

How To Win Irish Magic Slot

When it comes to winning in the Irish Magic slot, we still don’t have much information. However, we know that this game will feature 10 paylines, so you’re going to have to land matching symbols on at least one of these paylines. Just like most of the newest slots are, the Irish Magic slot will probably require you to land at least three matching symbols from left to right in order to win. The game has low-paying and high-paying symbols on the paytable. So, your win depends on the symbols that you will land.

Irish Magic looks like a game that has a lot of potentials to be played by the regular players. And why not? It will have free spins, Level Up system, scatter and wild symbols, and probably a Symbols collection! Once we receive more information about Irish Magic, we will update the review, so stay tuned and make sure not to miss anything about this amazing slot!