Players will find a familiar layout of three rows and five reels. Winning outcomes can occur on 20 paylines and the smallest bet of 20p plays for the long-shot, big win odds nevertheless. In terms of variance, Burning Classics is in the medium realm, while the theoretical return to player is 96.10% 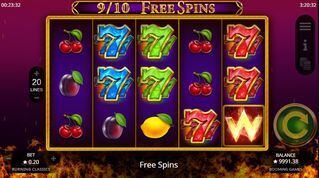 Booming Games have a crisp new slot game with diamond-studded lucky sevens and a bunch of classical fruits. The game at hand is Burning Classics slot and it comes with a payout potential of up to 2000x your bet. The game may appear classical but it comes with the standard equipment of a modern slot.

In terms of gameplay and features, the game boasts with an odds-improving wild symbol that can cover up a full reel in multiple places on the set. Probably the crown of the winnings can be had in the free spins bonus where the player gets multiple spins from the same bet.

It looks interesting enough considering the list of specs and the look and feel, so let's cover some detail.

The graphic design resembles any fine classical slot, regardless of whether it is on the casino floor or on a mobile casino near you. The fruits and the sevens give it off as a classical game but one that is finished with a crisp graphic design and should we say, style.

Playing on the Burning Classics slots feels like you are pulling the lever on a one-off, regal cabinet for a slot machine. Some visual effects apply and these are mostly surrounding winning outcomes, the refracting wild and the burning fruits. Sounds and looks proper and there is music that fits the calm mood.

How to Play Burning Classics Slot

Playing the game starts with pressing the button that feeds it coin. Each spin deducts the selected amount automatically. A new wager is drawn for the coming spin and so it goes.

Any winning outcome is followed by the coming of a pulsating green fixture that invites the player to nudge the chips on to the gambling table which is predicated by making a choice on a hit-or-miss basis.

The initial winning outcome is now doubled and there can be a repeat of the same, if the Burning Classics slot decides the cast either of the spinning cards in the color of your choice. It's a fun thing to try for sure, but it's a funny thing how unpredictable the game was born to be.

Players can roll on with the rhythm of the pay and lose by enabling the autoplay mode. Pressing the plus next to the bent arrow opens up a shelf that contains few things that are of possible use, of which the 50 number in a play button is the one anyone would want.

The autoplay button starts the reels for 50 turns without a finger on the button of gold. Anyone wishing to stop simply presses the off button which is square and counts down from the top number.

Of course, to have a play on Burning Classics slot is easy and the math model is the thing to thank for presenting odds for the cash prizes.

How to Win Burning Classics Slots

Winning at any turn in the game requires at least three symbols to belong to the same kind and to have landed on the same payline. The payline is the receptor of the good odds from any possible turn. When it wants, the game can set apart three or possibly more winning outcomes across the 20 paylines.

The ingredients on the paytable show more than a tolerable payout structure. Sensible enough, the fruits are slim pickings when you only land three of a kind and even four for the couple of common fruits.

The table of Burning Classics slot goes as such: fruits pay between 0.05x your bet and 5x. It is a huge spread indeed, but not for the sevens. Three, four and five sevens can pay between 1x and 10x.

One attribute of the game is that it can raise stacks of the same symbol kind, which certainly helps to improve the payout. The same is valid for the wild symbol. A wall of wilds can always mean a respectable winning outcome is just about to boil over into your pot.

The free spins bonus that we as slots experts are always anxious to see at play is triggered by three, four or five scattered symbols that can land anywhere on the reels and pay a prize.

2000x your bet is the top prize that can be won in an instant from getting five Free Spins symbols to land. The chances are razor-thin but playing on a slot game comes with regard for that edge of odds.

A test-ride can be had for free as the game is available as a free play demo slot. Players can visit a venue from this page, connect with the offer and then discover the present adventure.

Perhaps the game doesn’t have the best of RTP value but overall it is fit for a showdown. Small wagers or more note-worthy, there is a decently balanced payout structure and graphic design that can warm up to any few dozen spins.

Prepare for an outer space adventure and give Burning Classics slots a try as soon as it goes live!