New or old players, all the same, will find the present manifestation of the game enjoyable. A standard megaways layout has six reels and rows that can shift symbols of various sizes within the boundaries of two and seven rows. New punters who inch towards claiming a promo on this page in order to play Twin Spin Megaways will find a theoretical RTP of 96.04% and a math model that has medium to high volatility. 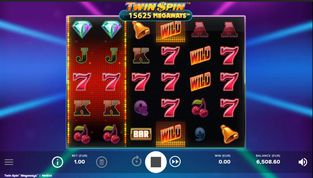 NetEnt is giving one of its most recognizable online slots a spin through the megaways machine and the effect is a super-engaging Twin Spin Megaways slot that can play across 177,649 ways to win. Players who have played the original game know perfectly well why this release makes a positive association. Anyone who's had the Twin Reel feature trigger to its fullest potential has been met by a healthy rush brought about by a hefty win.

In terms of gameplay, this iteration of NetEnt's slot machine-contriving talents comes with the famed Twin Reels feature which can modify the life out of that reel set for the potential big win. In addition to this, wild multipliers are in order during the free spins bonus, which is always a great way to give the bet-less winning outcomes a nice boost.

Both editions of the Twin Spin slot feature a neo-classical look and feel, as far as online slots can go. The reel set is set deeper in the depth perspective which enables players to focus on the full screen of events. NetEnt has steeped the game in arcade parlor-like visual effects that are visible behind the reels, especially during winning outcomes.

Twin Spin Megaways slots has dynamic gameplay that is marked by pulsating symbols and a very lively ebbing and flowing of the megapixels on a jumbotron, creating a color gradient effect which is quite pleasing for the eyes to absorb.

When it comes to the symbols, those who play Twin Spin Megaways will find a set of fruit symbols and a set of classical slot symbols, both of which are interchangeable - diamonds, sevens, BARs and bells with plums, cherries and royal cards.

The twin spinning adventure can begin with the push of the play button, which on NetEnt slots tends to be located in the middle of the bottom area of the screen. To its left and right are the two buttons that may come as useful during the gameplay.

Before returning players make any moves on the game (we understand the eagerness indeed) , a reckoning with the bet amount is in order, because the casino's default bet may not reflect the amount a player may have intended to wager. Pressing the button of coin stacks opens up the list of bets, which start at 10p per spin and ends at £200.00 which is typical for NetEnt.

Probably the best way of playing the game is by selecting the autoplay mode which can be configured by pressing the circle arrow button which is to the left of Spin. This opens up a window that comes with the basic settings such as the number of automatic spins, however, the advanced menu contains few optional settings.

Twin Spin Megaways slot plays across the full potential regarding the ways to win regardless of the bet amount. Players can play with 20p and still play for a chance to land winning outcomes on the cascading wins system and across the full 117,649 megaways.

To land a winning outcome the game has to post between three and six symbols of the same kind. The winning combination must land on adjacent reels, starting from the left. Twin Spin comes with a wild symbol that can substitute for any of the standard symbols and do another very important thing during the free spins bonus feature.

In terms of payouts, most valuable symbol is the diamond. Six of a kind can pay 10x multiplied by your bet. The minor symbols can pay prizes that are surprisingly decent, ranging from 0.4x to 1x your bet.

A note about the cascading wins system. Any winning outcome can result in a subsequent win and these outcomes can continue in succession as long as there are matching symbols to form a win.

In terms of features, there is the one that defines the game and gives it its title and the other one is a standard free spins bonus. The Twin Reel extra feature is a random event that results in two or more reels aligning their symbols across the reels and rows. It is possible for the game to trigger as many as six twin reels across the full reel set.

The free spins bonus is triggered with five scatter symbols in exchange for 15 spins. During the bonus, players can enjoy the benefit of potential wild multipliers which come with 2x or 3x on the win. What is more, the Twin Reels feature can trigger in the bonus at random and the rows are fixed at seven, which means every spin plays at a greater number of ways to win.

If five scatters land on the reels the game will retrigger the feature.

NetEnt has made the game available to play as a free play demo slot. Players can test-ride this twin-spinning adventure at online casinos, such as those on this very page, in its practice play mode.

In terms of the maximum payout potential, it is possible to imagine that the figure can rise above 20,000x from a confluence of extra features and many retriggering events. It is especially worthy that the number of rows expands and stays at seven during the free spins bonus, so any Twin Reel event that involves multiple reels is simply primed to trigger a big win.

Discover the Twin Spin Megaways slots by claiming a welcome offer right from this page and play at top-rated online casinos.