A retro slots action to the core spins diamonds and sevens and bells towards potentially big wins, of which the jackpot win is 2500x on the winning bet. Three Gems Adjacent slots doesn't have a bonus feature but it does pay both ways, left to right and the other way around, including wins of three or more from the middle three reels. 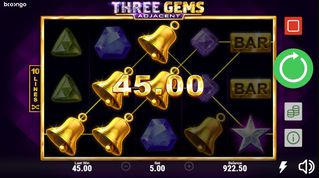 A defining feature of Three Gems Adjacent is the mighty red seven symbol, which can shake out the game's jackpot prize, which is 2500x multiplied by the winning bet.

Booongo Games are very similar to Playson. They both produce retro, classical, fruity and gem inspired slots which have found the niche in the world of online casinos and slots.

The game at hand comes from a casino software developer studio that has scores of slots that are remarkably fun to play, even though almost always they involve gems, diamonds and fruits.

Three Gems Adjacent slot is one of those, but comes with a twist. The payouts are made both left to right and right to left, which is a nice way to nudge higher the chances for getting winning outcomes.

Not unexpected is the lack of a wild symbol and of a scatter, so no bonus features here, but the absence of these symbols leaves more room for wins with the remaining symbols.

In terms of the graphics design the slots experts at Booongo have created more of their best. The game plays across three rows and five reels which show an array of gems, plus a golden BAR symbol and the diamond-embossed ruby seven symbol.

Winning outcomes are marked by a lights and shines across that payline or paylines, and the gems themselves show a glitter and glow to punctuate the event. There is a soundtrack to this reel adventure, but it isn't anything out of the ordinary, in fact it is just few sounds that mark a number of events.

The layout is quite easy to follow and all of the settings buttons are on the right-hand side of the screen.

The game starts with the push of the big round and green Spin button, which can be seen on the right side of the reel-set. This action will cause the reels to turn once, deducting the active bet from the balance one time.

The active bet amount is shown at the bottom of the screen, just underneath the third reel. To the left is shown the last win and the balance amount can be seen on the opposite end.

Three Gems Adjacent slot has a turbo button, which causes the reels to spin faster and stop sooner than the usual, when it is toggled on. You can do that by pressing the thunder button.

If you want to select a bet amount and view the grid of bets the game is offering, press the two coin stacks button underneath the button for Spin. There, the smallest bet spells £0.20 per spin and the biggest bet is £100.00.

In terms of payline bets, these amounts reflect two pennies for the smallest and £10.00 in the most expensive case.

At any rate, whatever bet you select it will always play across the ten active paylines and if you want to engage in the game hands-free, you can use the autoplay button, which sends the reels spinning immediately.

How to Win Three Gems Slots

The game offers two way payout mechanism and this is its main advantage over slots of the similar style. This means wins can occur not only left to right but also right to left.

Winning outcomes must include three symbols of the same kind. Optimal payouts occur with five matching symbols on any one or more of the paylines.

In terms of value, the most lucrative symbol on the Three Gems Adjacent slot is the red seven. It pays 250x on the winning bet for five matching symbols.

The sevens are followed by the silver star scatter symbol. It also pays 250x multiplied by the bet, however, unlike the other symbols, this one can land anywhere on the reels and not necessarily on a payline.

The bell symbol follows with a payout of 50x multiplied by the winning bet.

There aren't any bonus feature in the this game, so the players will have to make do with the base game wins. It's probably worth mentioning another time that the adjacent wins payout system allows payouts from both ends of the reels, as well as in the middle.

Booongo are known for making all of their online slots available to the players as free play demo slots. If you want to test the game with free credits, you can do so at online casinos that host demo slots. But remember, if you score big cash it will be paid zero, because of the fake credits (money) mode.

Don’t expect a whole lof from this game in terms of gameplay features and excitement, because it’s all about the retro look and feel. Booongo Games make it work nonetheless, so the game does come with its share of fun.

Discover the Three Gems Adjacent slots by claiming a welcome offer right from this page and play at top rated online casinos.