PopRock is a new slot release from Yggdrasil in collaboration with AvatarUX. It’s a five-reel game but it has the PopWins mechanic, which allows it to deliver a big game area and enormous wins, with thousands of active paylines. This is the first PopWins slot game where mystical gems release arcane powers which pop, multiply and expand, and give you a massive amount of winning combinations. 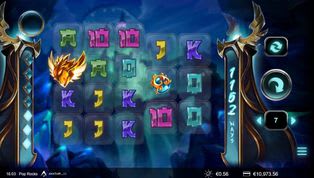 Slot players are always looking for innovative and new games. Yggdrasil succeeded to deliver such game with the launch of its new slot with PopWins game mechanic called PopRocks. PopRocks is the first game to use PopWins. Basically, PopWins is a feature where symbols are popped whenever you land a winning combination and are replaced with new ones. The new symbols can expand the size of the game.

PopRocks is an online slot with five reels and four rows that will be released at the end of this month. You will start with 5x4 reels and 486 ways to win, but while playing, you can end with seven rows and 33,614 paylines. It’s an Asian-themed game full of gems that offer players maximum winnings of up to 72,188x the stake, which is incredibly high for a slot. The RTP is also pretty good - 96.80%.

You can play PopRocks on all devices, both desktop and mobile, from as little as £0.10, to as much as £30 per spin. This is a game with a medium variance and high volatility and is able to deliver huge wins to the players. However, keep in mind that it is not easy to get a huge reward in this game. Moreover, the PopRocks slot has some interesting features, including the PopWins and the increasing win multipliers.

The action appears to take place in a huge and distinguished castle set above in the source of the mystical gems. The game is set at night, while the reels are held by huge towers of the castle that make a mysterious scene. The reels are set in the castle’s entrance and the symbols land from left to right, rather than spin. In addition, the soundtrack is dramatic and mysterious. All in all, the game has great design and high-quality graphics.

How To Play PopRocks Slot

Set up this PopWins adventure by selecting the bet per spin, unless you want to use the default bet that will be chosen by the game when launching. The bet will be shown at the bottom of the screen and you can click there if you want to adjust it. As mentioned, bet ranges from £0.10 to £30 per spin.

The ‘Spin’ and the ‘Autospin’ buttons can be found on the right side of the reels. The spin button is a big circle so you’ll notice it immediately. The autoplay option is also there, under the spin button, so make sure to activate it if you want to play this game hands-free.

Under these buttons, you will notice a three-dash button. It shows the paytable as well as the gameplay information. Feel free to press it if you need to learn something about the game.

How To Win PopRocks Slot

When you start playing the PopRocks slot, you will begin on five reels and four rows that will provide you with 486 ways to win. In order to form a winning combination, you have to land matching symbols on adjacent reels beginning from reel 1.

However, with the PopWins feature, two new symbols can replace the winning symbols and the reel will expand as a result. This can give you seven rows and 33,614 ways to win. As you can see, the number of wins in this game is huge, so there are numerous chances to form winning combinations.

The main thing that makes PopRocks unique is its bonus features, one of which is the PopWins. Here we will go through all the bonus features that are included in this game.

PopWins is a new feature that is expected to be included in many slot games from now on. In fact, PopRocks is the first slot that has this feature. PopWins is similar to the Cascading Reels feature with a couple of different rules. First of all, those symbols that are part of the winning combination are popped off the reels and are replaced by two new symbols. This increases the size of the reels and each reel can expand seven symbols at most. The PopWins feature is the one that gives the game that many ways to win. Quite interesting, right?

And finally, the game offers a Bonus Mode feature that is activated once all reels contain seven symbols each. When this happens, a random wild symbol will be added to the reels and the multiplier will increase by 2. From each pop, one new symbol appears.

PopRocks is a very fun game with such interesting bonus features. The PopWins feature makes it a unique game and we believe that players will want to try that. If you are one of those players, make sure to keep up with us when the game gets launched and claim your welcome bonus right from this page.